Review -- BLACK IS THE COLOR by Julia Gfrörer 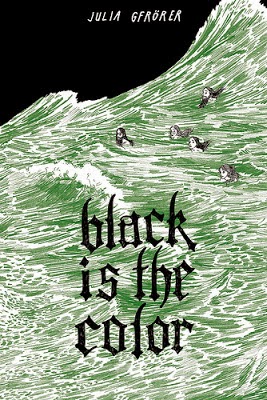 Black is the Color undulates like the ocean in your nightmares – the swells providing a rhythmic back-beat to all the subconscious horrors your brain amasses during the day – telling you something you know but can't actually face, quietly reminding you of your mortality, your isolation, and the inevitable sense of loss all things eventually breed. While dragging its fingers softly across your lips to comfort, it confronts you with the stark truth that everyone and everything is eventuality subsumed into the darkness.

Julia Gfrörer has been creating comics like this for awhile now, but with Black is the Color she takes her bleak sensibilities and layers them into a seafaring tale that plays with your sense of time as much as your sense of self. Ostensibly, Black is the Color is about a 17th century sailor, Warren, who is cast off by his shipmates because their voyage has gone awry, their resources dwindled, and the greater good must be thought of first. As Warren floats in the vastness of Gfrörer's cross-hatched ocean, he is tempted by and succumbs to both the romantic advances of a mermaid and warm embrace of a quiet death. As he sits in the dinghy, Warren reflects on his place in the world through the connections he has made in his life. He has abandoned both his wife on shore and his lover on the ship and, by his parting, echoes the gulf that always exists between people, even those that we love the most. In the end, Gfrörer's character is released and his essence returns to the void, black and dispersed.

Echoing the title of the traditional Applachian folk song Black is the Color of my True Love's Hair, one which Nina Simone foisted into the larger consciousness, Black is the Color echoes the song's sense of longing and the enmeshment of love. Like the song, there is power in understatement, a torrent in the inferences it forces, and a universality in its vibrato. There is a Gothic Romanticism at work here in its use of the fantastic, the pathetic fallacy, and its setting, but Gfrörer plays with the expectations of the genre. While the time period of the narrative is clearly placed in a historical past, she has her mermaids speak in the lexicon of the present – the hipster vocabulary of ironic detachment to experience in the quest for the cool. This juxtaposition jars and the reader disassociates in a time vortex, unhinged from the a priori Gothic moorings, and enters a universal sphere where, standing with arms akimbo, each foot rests in eternity.

Intermingled with all this is the notion of desire. Gfrörer comments on the underpinning mundane nature of our highest human passion by comparing it to the possibilities of the extraordinary, and then holds in its hand a further sense that even the extraordinary can be just another mask on the routine and the tiresome. For Gfrörer, longing is a like a sapling bent upon itself, full of potential energy, circular in appearance, but ultimately malformed and unremarkable. A man may lie with a woman, lie with a man, lie with a mermaid, but regardless of any of it, he eventually returns to the quotidian void alone. Gfrörer has Warren chose fantasy over reality in the final hours of his life, but even this choice means little to his legacy or even to those he has abandoned. Appreciating mystery, embracing wonderment, living in a liminal space – none of this matters in a world carpeted with banality or in a life whose only future is death. Gfrörer is harsh in her assessments, and yet Black is the Color is still a work of beauty, an artistic statement whose aesthetic eclipses its dark heart and blunt nihilism.

There is a certain poetry in its six-panel pacing, as if Gfrörer is desperate to find that which is beautiful within her philosophy of defeat. And it is here, in this desperation and yearning, that Black is the Color goes from an utterance of angst and transforms into a work of art. Here is the creative salvation to the existentialist dread the story embraces. Perhaps Keats was correct that the only Truth we know and need to know on earth is Beauty – that the creation of the beautiful justifies what, for all intents and purposes, is a meaningless moment of existence. In the creative act we validate our consumption in the void.
Black is the Color is all this. It is the work of an artist, mature in her themes and execution, who can take her audience to the cliff's edge, force their face into the vast emptiness below, and then, through a subtle song, provide a reason to turn from the temptation to leap and walk back along the crags to whatever it is you call home.