What if the Ball Never Came Back? Matt Vadnais on the Zen of Bowling in BIG DRINK by Max Huffman

Given that bowling has been pushed to the periphery of the hobby landscape, it’s surprising to tally up the number of texts, including The Big Lebowski, Kingpin, and Camper Van Beethoven’s absurdist, college-radio hit, “Take the Skinheads Bowling,” that recommends, to various degrees of seriousness, bowling as a metaphor for living.  Upon reflection, the pastime does lend itself to a variety of nihilistic aphorisms about repeated, fruitless tasks done in the name of forgetting other repeated, fruitless tasks. To bowl is to be Sisyphus in serial, rolling the rock again and again in situations that change but remain identical from city to city and year to year. “Some people say,” the Camper Van Beethoven song goes, “that bowling alleys all look the same.” That’s not quite true, though: bowling alleys all smell the same, an alluring and upsetting perfume of wax and oft-borrowed shoes. That sameness is part of its allure. Like smoking or any other self-medication, bowling is a controlled repetition that serves a variety of functions; it can be done to connect to others, to withdraw into the self, to celebrate a promotion at work, or to distract from a job that’s going nowhere.
If bowling is not the central metaphor of Max Huffman's Big Drink – a self-published comic in the same tongue-in-wiseass register as Camper Van Beethoven’s oeuvre – it is definitely its leitmotif. The bulk of its action is set in a bowling alley where protagonist Gloria mops lanes, sprays shoes, and cleans vomit out of the ball return before encountering a cadre of voluntary trepanists who intentionally drill what amounts to a thumbhole in their skulls. More to the point, Gloria appears to be struggling with something like depression or dissociation where repeated mundane tasks combine to constitute an endless task. She drinks enough meaningless sodas – often spiked with alcohol – that the containers pile in the backseat of the car she occasionally naps in; other than an establishment the reader sees very early on, this pile of cups is as close as we get to a “big drink” in Big Drink. The drink is one that is consumed over time. 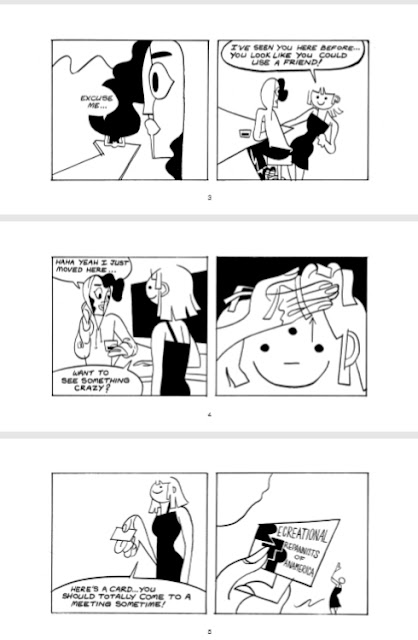 Though depression comes in a variety of shapes and sizes, I am particularly interested in depictions that focus on the particular oppression of tasks that must be undertaken so that they can be repeated. Dishes must be washed so they can be dirtied. The floor must be mopped so it can be dirtied. Pins must be knocked down so they can be set up again. One rolls the ball. The ball is returned.
Huffman leans into this particular kind of dissociative read without making it the explicit subject matter of the comic. Big Drink’s art borrows heavily, at least in places, from mid-career Picasso, severing, bifurcating, and rearranging faces in a space-defying contortion. Additionally, Huffman uses a narrative structure that forces readers to connect the dots, weaving together a number of scenes without providing a clear sense of what Gloria wants or what the stakes are, beyond, of course, surviving the repetition of days in which her own sense of meaning and purpose is not abundantly clear. Moments of life her life flash as meta-textual cartoons on the closest-circuit TV possible, the bowling alley scoreboard, where they are watched by a coworker who asks, “You ever notice they never repeat the cartoons?” 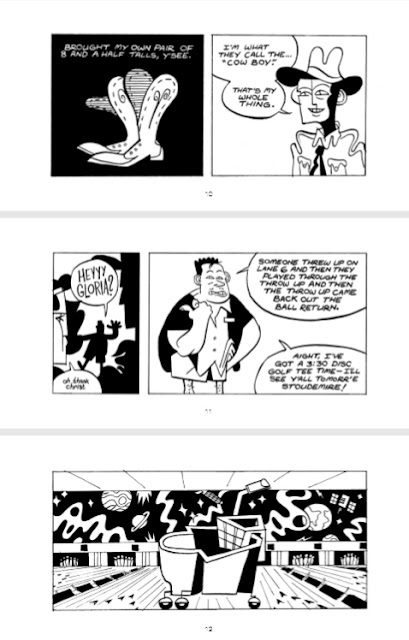 Finally, I am inclined to understand Big Drink in the context of depression because it is ultimately about trepanning. While I am not entirely familiar with the “uses” of drilling a hole in one’s skull, I do know that purported benefits of doing so include increased blood and brain volume that provides a potential relief for depression. Furthermore, Huffman presents the group that welcomes Gloria with open arms – the third hole of their skulls drawn in the position one might find the third eye – in the visual language of a support group. Whatever exactly they are offering, they all seem to have needed it too.
In the context of a truly bizarre plot twist – one I won’t give away – that is as triumphant and joyous as it is befuddling, it should also be remembered that voluntarily boring a hole in one’s skull probably qualifies as self-harm. That said, the comic treats trepanning with a light touch and none of the gore one finds in Joyce Carol Oates’s harrowing short story, “A Hole in the Head.” 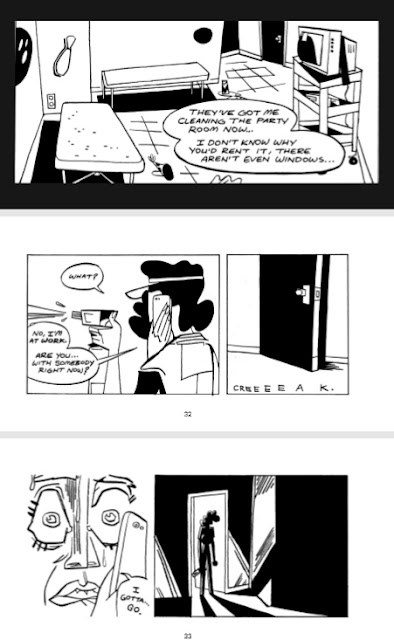 It is striking that, despite the subject matter and numerous invitations Huffman provides to contemplate weighty issues, Big Drink is drawn with a kinetic and stylish playfulness. Likewise, Huffman riffs on a number of comedic set pieces, including a montage of hipster archetypes and an homage to a the WKRP in Cincinnati episode in which Les Nessman arranges for turkeys to be flung from an airplane – here, of course, it is bowling balls that can’t possibly fly – in a joke that is completed by the visual reminder on the scoreboard that three strikes in a row is a turkey. These elements, though, contribute to Huffman’s treatment of Gloria’s quest for meaning and purpose by landing in such a way that she’s never in on the joke. Despite its mania and energy, Big Drink’s funniest moments come off – and I mean this as a compliment – like a sitcom laugh track augmenting an otherwise serious production of Hamlet.
I left the comic unsettled in a way that feels productive; Huffman ends the story with a scene that is ambiguous but not incomplete or unsatisfying, suggesting that, one way or the other, Gloria has found a way to stop thinking about the dishes that always need to be washed and a backseat that always needs to be emptied of the detritus resulting from the constant consumption of small portions of the big drink. Though I finished the comic knowing far more about what she was escaping than where she was escaping to, the final, inscrutable moments of this story are memorable and, in and of themselves, a worthy escape from my own serialized and inescapable mundanity.
-----------------------------------------------------------------------