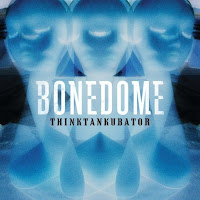 Don’t Tell Allan Hayslip That You Love Him

Steeped in the dark reality of dysfunctional and co-dependent relationships – celebrating and reveling in the more painful aspects of love, the giving of oneself to another and the violence therein – Allan Hayslip, long time Dallas, Texas sideman in bands such as Vibrolux, Sixty-Six, Prince Jellyfish, and currently performing in Rock Star Karaoke, pushes himself to the fore with his band Bonedome and their newly released album, Thinktankubator, which Hayslip describes as a “collection of relationship songs clothed in quirky, sad, introspective, and self-deprecating timbers.”
The album opens with the song Sandman, a muddied rocker thick with overdubbed harmonies, Julian Cope overtures, and a sneer, in which Hayslip openly declares his inability to keep any sort of resolve in his decisions in the face of another’s desire. This abdication of power, according to many a paisley sweater wearing prescription writing psychiatrist today, leads to feelings of inferiority and, more to the point in this case, anger, resentment, and mistrust of others. It is in this pot that most of Thinktankubator stews.
Songs like Eraser, a slower-tempoed harmonic showpiece in which Hayslip really lets slip his chorister training; Easy, a heavy, crescendo pointing arm waver; and Better, a real multi-layered stand out rocker, all play with the idea of betrayal and the hurt it begets. There is an undertone of violence in these songs, most obviously in Easy, whose chorus of “It’s easy to kill a man / It’s easy from where I stand” is almost a distraction from the strangulation fantasy in which Hayslip revels in the aftermath of his lover’s seeming affair. Hayslip himself is an imposing figure, large by any standards, which only adds to the ominous nature of these songs.
Yet Hayslip also seems to indicate that he is just as capable of betrayal as anyone else. Girl One, a song I was singing to myself while folding laundry hours after listening to it; The Other One, an obvious nod to the Pixies (actually Hayslip and Black Francis look like they could have been separated at birth) that veers off on its own to become comfortable in its authentic groove; and Red Flags R Trouble, another of the album’s songs that stuck with me long after I last listened to it, all seem to inform the listener that Hayslip can give just as good as he can get in this cage match of heartbreak and betrayal.
The nakedness of these songs is almost brutal at times. This may be a result of the fact that Hayslip has lived through some real heartache in his life and has, through true introspection, been able to channel this destruction into an act of creation – or it may be a by-product of the fact that most of the basic tracking for the album was done in an non air conditioned control room in the heat of the Dallas summer, allowing Hayslip to engineer naked, a fact he seems to take great glee in revealing.
The song I Can Lose You takes the idea of abandonment further and moves it into an interesting discussion about the nature of friendship and the sacrifices of that relationship, with Hayslip playing the convenient martyr in this complex song heavily indebted to David Bowie’s Space Oddity and Ashes to Ashes.
While the album’s core rests in these themes of betrayal, abandonment, and violence, there are a couple of notable exceptions. The first is Steven, which has one of the most honest choruses (chori??) since Lou Reed openly declared that he wanted to be black. In Steven, Hayslip shouts “I write songs to give good interviews / I do drugs to give good interviews,” underlying his understanding that nothing sells today like a good back-story and an even heavier horse or monkey on your back.
The other exception is my favorite song on the album, Fade Away, a stumpy, thuddy collision between Buddy Holly and AC/DC. Here, Hayslip turns on its head the classic poet pick-up line: “Baby, if you let me lick on you awhile, I’ll write a poem about it and make you immortal.” Fade Away seems to celebrate the transience of existence and notoriety -- that he and his lover are “just two drops in the sea” who will eventually just fade from history. “And it’s okay,” according to Hayslip. While seemingly celebratory of this sort of carpe diem, the song’s ending refrain of “I’m gonna tell you” returns the listener to the ominous tone of the rest of the album, adding another layer of complexity to the message of the song.

While the album does misfire a couple of times, most notably on Slow Jesus Xing and the cringing choral drudgery of Custody Lullaby, the great majority of it is filled with tight, well-orchestrated songs that highlight Hayslip’s song writing ability and his Peter Murphy ispired vocals. The album bodes well for Hayslip’s continued emergence as a front man and it is certainly worth a listen, especially if you’re driving away from your lover’s home for the last time ever, gripping the steering wheel white-knuckled tight, all gacked up on anger and betrayal, and looking for something to say.