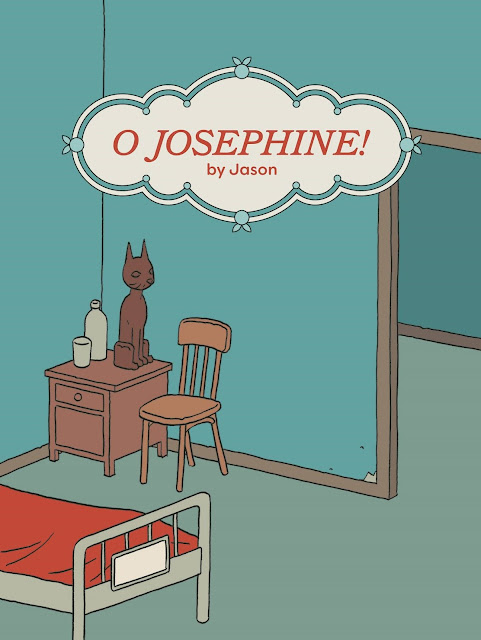 At this stage in the great Norwegian cartoonist Jason's career, he's not doing much to necessarily surprise the reader. His newest collection of short stories from Fantagraphics, O Josephine!, will feel very familiar in its content to long-time readers. A whimsical autobiographical story about walking on a well-known trail? Check! A funny but poignant historical mash-up? Check! A hilarious reimagining of a beloved artist? Check! A mundane but sordid account of relationships gone horribly wrong? Check! He's covered all of this ground elsewhere, but shortening and sharpening these stories for this volume is what makes them interesting. Jason has always been a master of restraint and deadpan humor, as he's allowed readers to make connections in his frequently enigmatic narratives. The visually deadpan quality of his anthropomorphic figures, frequently sitting slumped with poor posture, often allows him to both double-down on the absurd or salacious quality of his stories. In story after story, Jason's greatest skill is in recontextualizing his familiar figures again and again.

O Josephine! opens with the droll autobiographical short story “The Wicklow Way.” It's a follow-up of sorts to his book On The Camino. That book was a departure, as Jason had never done any autobio before, but the approach was the same as always: restrained in tone with occasional splashes of absurd humor. Both stories are about going on long, historical walking trails, and "The Wicklow Way" is in Ireland. There's nothing in the way of introduction or any explanations as to his motivations. He simply starts walking and takes the reader along with him, making witty comments all the while. Every now and then, he'll see something and his visual imagination will flash the reader through a number of images, like seeing a deer reminds him of the film The Deer Hunter. There are plenty of recurring gags, like singing "I'm Going Down" and finding a half-dozen different ways to refer to Bruce Springsteen. He draws leprechauns, imagines James Joyce and Bono eulogizing him, and pretends to see Jack Nicholson's character from The Shining in a hedge maze. While this is autobiographical, Jason doesn't reveal much about himself. This is a deliberate strategy. This is a finely-crafted set of gags and observations with varied visual backgrounds that provide both reader and artist something new to look at and talk about every few panels. 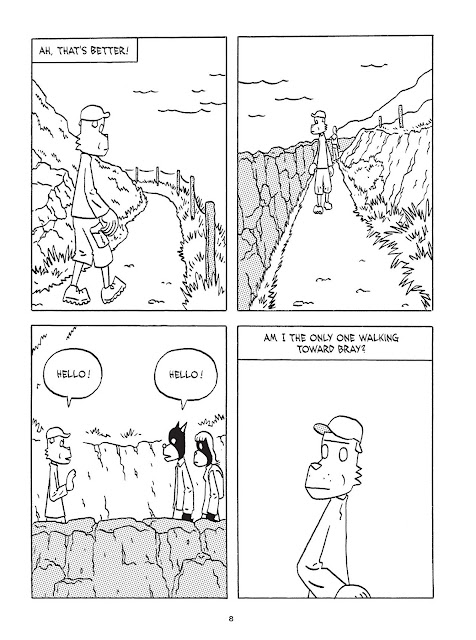 There are through-lines in O Josephine!, but they are subtle. One of them is Jason's status as a cultural enthusiast. He loves music, films, literature, and poetry. In "L.Cohen: A Life," he expresses this enthusiasm regarding the late singer-songwriter Leonard Cohen by way of a series of absurd anecdotes and "facts." Jason uses a spot yellow to give this fake retrospective of past events an old-time feel, as though one was looking through yellowed newspapers or photographs. He relates Cohen's "encounters" with Federico Garcia Lorca (who taught Cohen the Heimlich maneuver), Allen Ginsberg, Hank Williams, Fidel Castro, and the Beatles. Jason uses a four-panel grid throughout the book, a technique that gives each story the same format and rhythm despite dramatically different subjects. In this story, Jason uses it as a way of landing a series of (literal) punchlines, as Cohen meets someone and inevitably winds up in a fistfight with them. Jason mixes fact and fancy in his narrative, embellishing certain events while confabulating others. All of this is in service to making Cohen a mythological figure whose birth was preordained by Nostradamus, alternating between profundity and silliness. Jason never abandons a through-line, however, and the final panel of this story hooks into the absurd premise established early on. 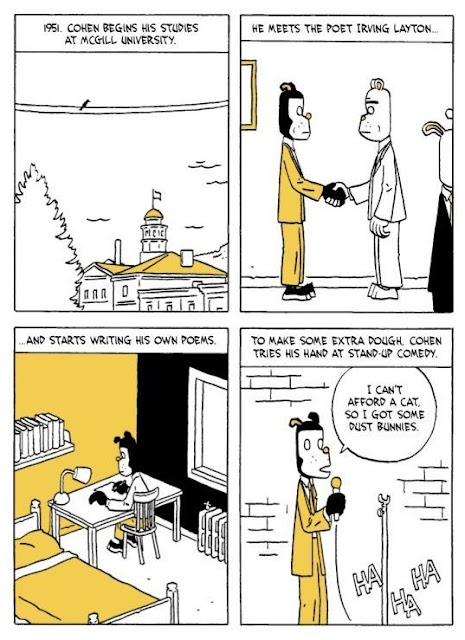 The first two stories feature real people, but there's a deliberate act of verisimilitude at work here. The first story is autobiographical, but Jason might as well be anyone here. The second story is a fake biography, affectionately spoofing the life of an artist. However, with the third story in O, Josephine!, "The Diamonds," Jason uses a genre setting to explore a variety of emotional experiences. This is more in line with his earlier books, which used that ever-present deadpan style and off-kilter genre templates to delve into deep, interpersonal stories. "The Diamonds" is a take on sleazy detective stories, where a couple of guys have been hired to stake someone out and get proof of his bad behavior. 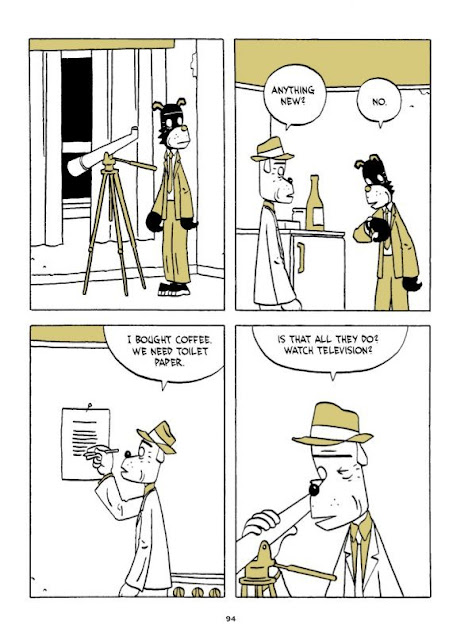 Jason often uses a jump-cut narrative approach, leaving narrative gaps for the reader to fill in based on the clues he leaves them. He keeps the reader off-balance, as the mundane practices of the detectives are offset by the heist TV show being watched by the couple they're keeping tabs on. Then Jason cuts to the personal lives of the detectives when they're off-duty, which range from interpersonal family drama to encounters with junkie friends and an actual hostage situation. Jason takes cues from novelist Raymond Carver by way of director Robert Altman here, as there's no single dominant narrative, nor is anyone posited as a morally superior character. They are people living their lives, making bad decisions, and carrying weighty secrets. They love music and TV and spend much of their time together quietly. They hurt each other and themselves through a lack of openness. This is Jason at his best, wringing in a surprising well of emotion through a restrained use of formal techniques over the span of just a few pages.

The title piece, "O Josephine!", is an ahistorical mash-up in the vein of Jason's book The Left Bank Gang. In that book, Hemingway, Fitzgerald, etc. are all cartoonists trying to get published instead of novelists. In "O Josephine!", Napoleon Bonaparte's great romance is with famous dancer & activist Josephine Baker instead of Joséphine de Beauharnais. The most remarkable thing about this story is that beyond the initial chuckles of this time-crossed pairing, Jason plays it entirely straight and transforms it into a bitter romance whose repercussions span generations. "Bo and Jo" are both portrayed as passionate but stubborn people with a profound connection that Napoleon quickly betrays by cheating on Josephine because she wasn't yet ready to sleep with him. 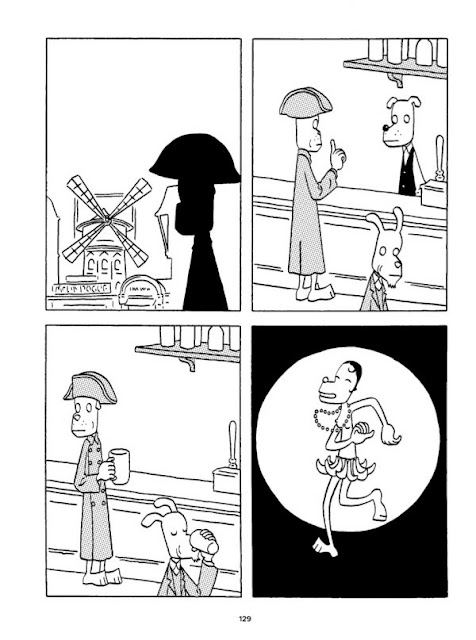 The primary conflict in the story is over a cat sculpture that Josephine gave Napoleon when they were together, but that he refused to yield when they broke up. That conflict lasts for years, as they eventually involve their children in a proxy war with schemes to steal the statue back or defend it against theft. The pride of Napoleon and Josephine blinds them to everything else, including the love of their children who chafe under their tyrannical parenting. When tragedy results from this conflict, there's an understanding of how pride can metastasize into something destructive and all-consuming. It's why, when he finally comes to her at the end and she asks "Why?", he replies "I don't know" and then "Who knows?" His first reply is, at last, an honest declaration of that malignant pride, while the latter distances himself slightly from his actions, as though it weren't up to him. Jason pulls off a neat trick here by using figures with whom the ideal reader is already familiar (so that he doesn't have to spell out their personalities) and then taking that familiarity to craft a complex, heartbreaking story.

This is the heart of what has made Jason such a compelling cartoonist over the years. He employs a visual approach that uses iconic, anthropomorphic, funny animal figures. He avoids naturalism because he wants the reader the freedom to interpret the story's events, as well as to give himself the freedom to inject absurd elements without disturbing the story's baseline equilibrium. What's interesting is that even as he uses that anthropomorphic style, he keeps the affect of most of his characters flat instead of going all-out in terms of exaggeration or grotesque stylings. His stylizations are conceptual, built on that cartoony but deadpan visual rock. Given that this formula is only ever altered to add color, it still allows him to tell any kind of story he wants. From gags to observational autobio to tragedy and beyond, Jason's frequently counterintuitive approach often speaks to the most powerful aspects of the human experience.