Cheap Thrills - THE HANDS OF SHANG-CHI, MASTER OF KUNG FU #17

THIS COLUMN ORIGINALLY APPEARED ON COMICS BULLETIN
Random Pulls from the Bargain Bin
In these economic times, finding inexpensive entertainment is difficult. Thank goodness for the local comic shop and a slew of comics nobody cares about anymore! Each week Daniel Elkin randomly grabs a comic from the bargain bin (for 50 cents) to see what kind of bang he can get for his two-bits. These are those tales. 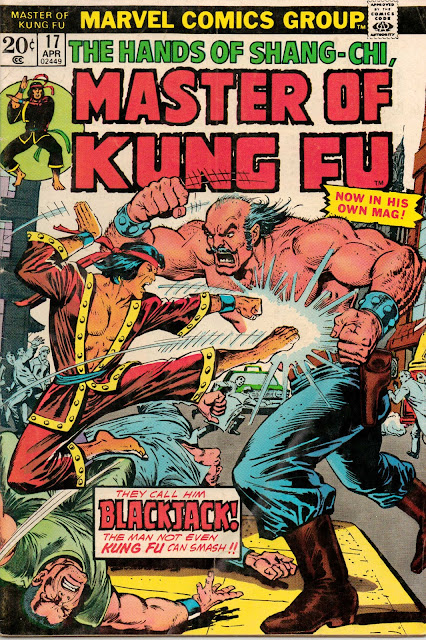 BUT I'M CARRYIN' A MONKEY, JIM
So I bought some old comics off ebay from Too Much Coffee Man's Shannon Wheeler. Though they are not technically randomly pulled from the bargain bin, they are awesome, truly Cheap Thrills, and they will be the subject of the next couple of weeks of columns. As the song goes: It's my column. I can do what I want to.

The first of the Wheeler Wonders comes to us all the way from the swinging 70's – April, 1974 to be exact.

April of 1974 was when Hank Aaron hit his 715th home run in Atlanta, Stephen King published his first novel (Carrie) under his own name, the Ray Harryhausen film The Golden Voyage of Sindbad was released, and the greatest straight man of all time, Bud Abbott, passed away.

Did you know that Penelope Cruz, Victoria Beckham, and Da Brat were all born in April of 1974? There is probably some joke I could make about this fact, but I'm feeling too old right now to be particularly funny.

Anyway, April of 1974 was when the band ABBA won the 1974 Eruovision Song Contest with their song Waterloo. Van Halen played their first show on the Sunset Strip, and Queen played their first concert in North America (in Denver, CO – opening for Mott the Hoople – heh). A frighteningly coke-ganked David Bowie released the epic album, Diamond Dogs, in April of 1974, reminding us that “This ain't Rock and Roll, this is Genocide!”

And lastly, not content to be merely flotsam following the tidal wave of Bruce Leesploitation crashing onto the shores of America, finally, in April of 1974, Steve Englehart, Jim Starlin, and Al Milgrom's dreams came true when The Hands of Shang-Chi, Master of Kung Fu got his own title (shucking off the shackles of its previous Special Marvel Edition Featuring chains), starting at issue number 17.

And what better way to inaugurate the new title then with Blackjack! The man not even KUNG FU can SMASH!

The Hands of Shang-Chi, Master of Kung Fu #17 opens with a split splash (I was taking a bath, long about a Saturday night)) setting up both our hero and his foil: 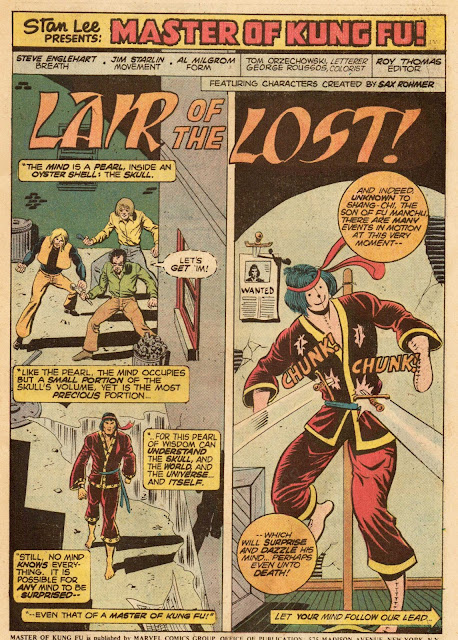 “The Mind is a Pearl, inside an Oyster Shell: the Skull. Like the pearl, the mind occupies but a Small Portion of the skull's volume, yet is the most Precious portion... for this pearl of wisdom can Understand the Skull, and the World, and the Universe... and Itself.” This has all the makings of something very profound, as long as you don't think about it all that much. Be prepared, for Englehart packs this issue with these sorts of pseudo koan gibberish … each of which, I might add, are AWESOME!

For the next couple of pages, Starlin keeps this split screen effect going. On the left side of the page, Shang-Chi is about to mugged. On the right side, we get to meet this issue's villains, Black Jack Tarr and his Murder Mansion.

But first, the muggers turn out to be these fellas: 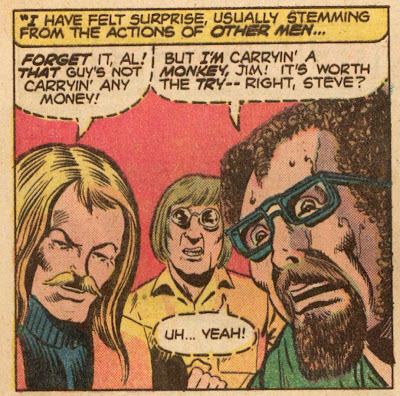 Hmmm.... Al, Jim, and Steve, huh? Ladies and Gentlemen, one page in and we've gone meta. That's right, it's our creators. Considering that Starlin is the artist, it makes sense that he appears the most debonair, but for Englehart to make Milgrom “carryin' a monkey”? We're treading some interesting ground here. I love that they did this, though – it's another example of how Marvel used to love its fans, giving them these sorts of inside jokes, making them feel like part of the Bullpen instead of viewing us as faceless cash parting stock enhancers like they do today. But I'm not here to rant about Mickey Marvel... yet.

So, the creators are trying to mug their creation – this metaphor is so ripe for a deconstruction that I can feel all my synapses cracking their knuckles. What is the relationship between creators and their creations anyway? What commentary is Englehart making by portraying the creators as junkies, in desperate need of a fix, willing to do harm to the product of their creative force? These are some pretty heavy questions.

I think, though, like Englehart and Starlin and Milgrome, I'll just let the creation come up with the answers: 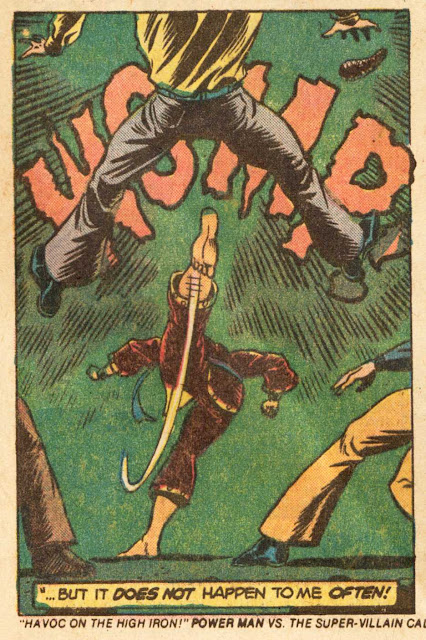 Of course, this raises even more questions – what does it mean when the creation kicks the creator? Who is in charge here, anyway? Who controls the flow of creativity? More importantly, especially nowadays, who controls the fruit of the labor? Englehart has devised a rather full meta-metaphor here that could take me hours to unpack.

But I've got a comic to write about – which is obviously more important.

On the right hand of the split screen pages, Black Jack Tarr has been plot developing. Earlier in the series, Shang-Chi killed Dr. Petrie (more on that in a bit). Now, Petrie's pal, Sir Denis Nayland Smith, wants revenge. He's in cahoots with Black Jack Tarr to lure Shang-Chi into Black Jack's Murder Mansion to … um … murder him (obviously). Nayland Smith is in a wheelchair because his legs have been destroyed by Fu Manchu. 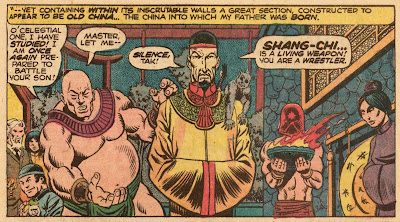 He's Shang-Chi's father. He's trained Shang-Chi to be “a living weapon.” But now Shang-Chi has gone rogue. He's got his own ideas about how the world works. The old man's ideas about global domination just don't fit the young man's groove, you know what I'm saying? Shang-Chi wants to make his own way in this life, make his own mistakes, love passionately, live freely, vote for third party candidates. Fu don't approve.

That's Fu for you.

Shang-Chi eventually makes his way to the Murder Mansion (as he must or what kind of story would we have here). Nayland Smith has some Federal Agents with him because he has to “work with Washington” when he is “on American soil”. The Federal Agents get the first crack at aprehending the Master of Kung Fu.

With the Federal Agents resoundingly kicked, Nayland Smith has no choice but to let Black Jack unleash his Murder Mansion. While it ain't no Murderworld, the Murder Mansion does have some tricks up its (metaphorical) sleeves: 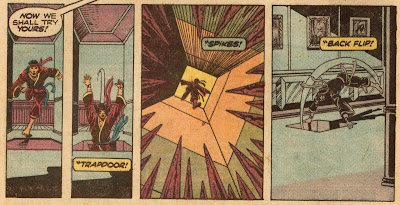 TRAPDOOR! SPIKES! BACK FLIP! I think there was some editorial miscommunication between Englehart and Starlin in these panels. What is more important in a comic – the words or the art? Why do we need both telling us what is happening. Figure it out, fellas – I mean, come on.

Nayland Smith continues to try to stop Shang-Chi with a falling chandelier and a room that fills up with gas (once again, this ain't no Murderworld). That's not going to stop a Master of Kung Fu, though. 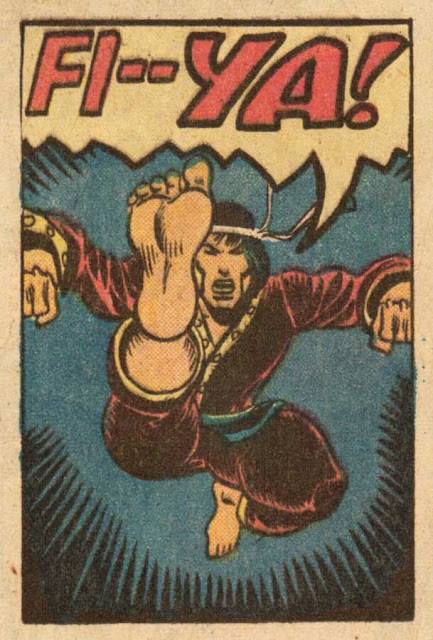 I guess when that all that fails, there's always the Robot Knights to unleash. These mace and ax wielding mechanized suits of armor seem to be just what the doctor ordered, as they begin to pummel Shang-Chi all cross-eyed. His best moves fail him, which leaves him facing his own certain death.

But remember, “the pearl of wisdom can Understand the Skull, and the World, and the Universe … and Itself.” 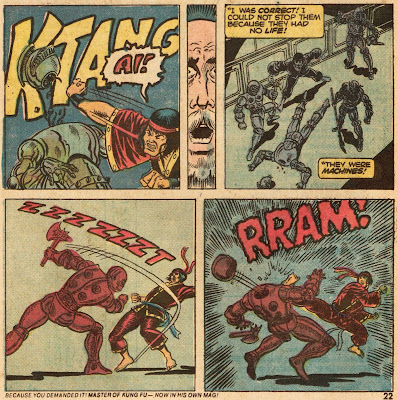 The Murder Mansion's best has been bested. Its owner now strides forth into battle. 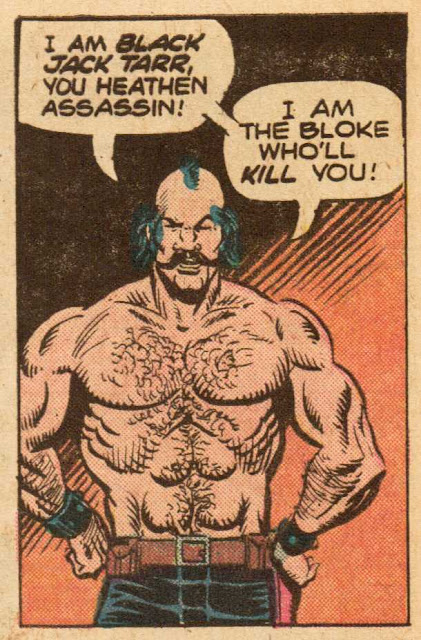 Black Jack Tarr is huge. He is strong. He compares himself to an Oak Tree. He talks a lot. Shang-Chi, on the other hand, is the Willow Branch. He says very little, but rather lets his actions relay his thoughts. 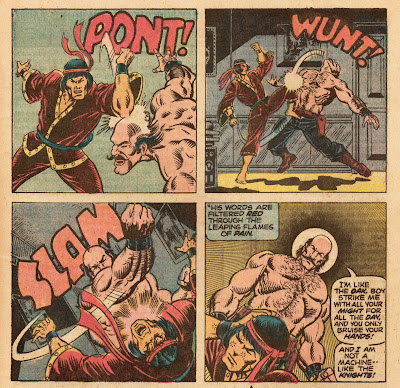 Of course Shang-Chi beats the Tarr out of Black Jack (it's my column, so yea, I can make that pun because fuck you).

Using some wicked Kung Fu moves, Shang-Chi is finally able to toss Black Jack over the railing and send him plummeting to the tastefully tiled floor of the foyer; “like midnight, another opponent has been delivered to the grip of gravity” (like I said, Englehart is full of these – this one REALLY sounds like it is supposed to be something that at least sounds profound). Shang-Chi is then able to turn his attention to Nayland Smith. Shang-Chi has come to talk. He admits he killed Nayland Smith's friend, Dr. Petrie, but he blames his father for his actions (as all young men will at some point do).

Then this weird shit happens: 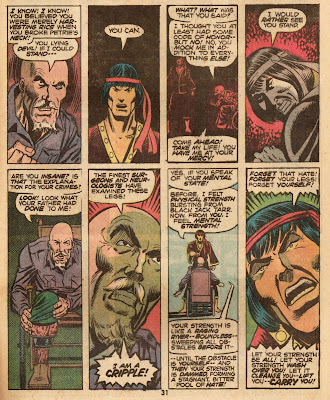 “Forget That Hate! Forget Your Legs! Forget Yourself!” Shang-Chi has suddenly changed from a Master of Kung Fu into a snake-handling, tounges spouting, backwater Baptist preacher. 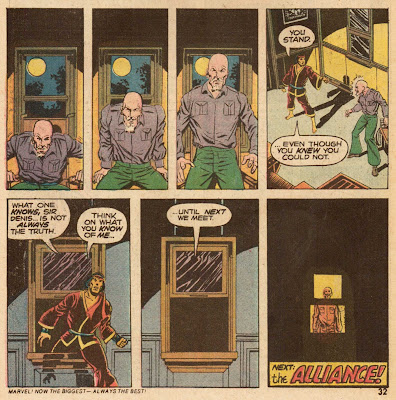 The finest surgeons and neurologists have examined his legs, but none of them ever said, “Hey Buddy, quit yer bitchin' and get up already”?

So that's issue 17 of The Hands of Shang-Chi, Master of Kung Fu all wrapped up with a bit of a let-down ending that I certainly wasn't expecting.

Then again, I really don't know what I was expecting. In his ebay auction description, Too Much Coffee Man's Shannon Wheeler wrote this of issue 17 of The Hands of Shang-Chi, Master of Kung Fu: “Pretty typical 1974 comics but Jim Starlin did the art and that's pretty cool.”

Which really means that it was AWESOME!

A couple of week's ago, Comic Bulletin's own Kyle Garret posted on his Facebook wall:

I appreciate what Jim Shooter did to get Marvel under control, and I love a lot of those books from the 80's. But for sheer bat shit insane awesome superhero comics, I don't think anything beats 70's Marvel.

After reading those Steve Gerber runs on The Defenders and Man-Thing, and then reading a comic like issue 17 of The Hands of Shang-Chi, Master of Kung Fu, I could not agree with him more. Marvel Comics were, I think, at their peak in terms of creativity when there was little editorial interference and certainly no mega-corporation planning stories around marketing events and tie-in licenses. This was an atmosphere of freedom, of creators creating, of “hey, these are comics, let's see what we can do with them”. Anything was possible, the creators just had to think it up.

Let creators create, even if what they create eventually ends up in the bargain bin. You never know where an idea will go unless you let somebody try it first.

And THAT was what was so wonderful about Image Con last week. THAT attitude is what has revitalized Image Comics and is allowing them to produce some of the most interesting books out there (I mean, did you see this line-up). THAT is what the industry needs so much more than big budget films and title spanning events.

See you next week with more Cheap Thrills with Wheeler's Wonders