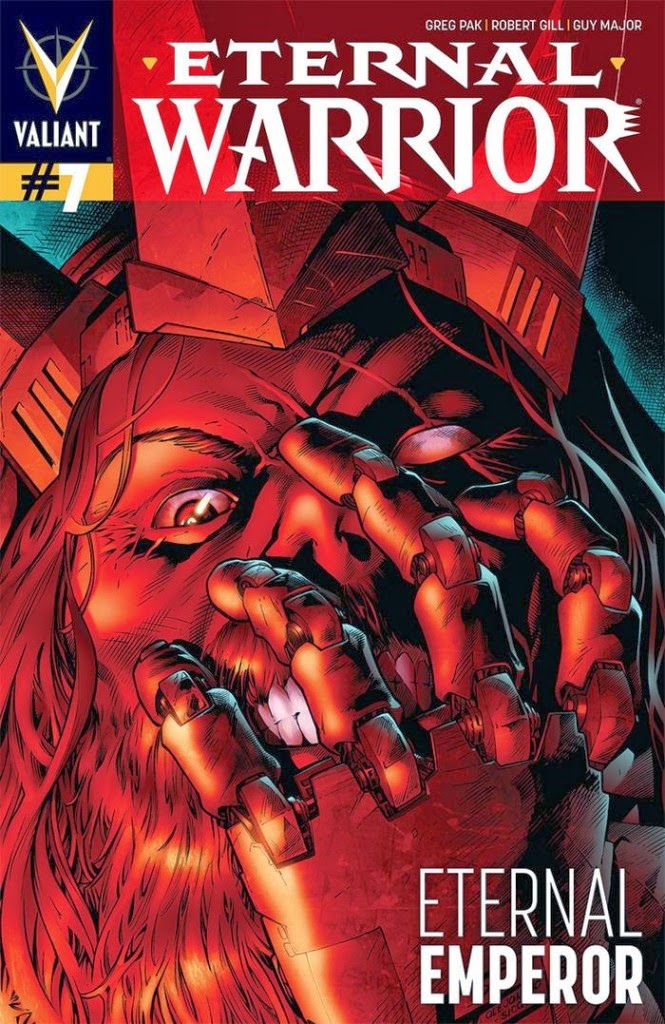 Elkin: It was that Italian philosopher George Santayana who said, “Progress, far from consisting in change, depends on retentiveness. When change is absolute there remains no being to improve and no direction is set for possible improvement: and when experience is not retained, as among savages, infancy is perpetual. Those who cannot remember the past are condemned to repeat it. “
He also said, “Eternal vigilance is the price of knowledge.”
I bring up these two quotes because Greg Pak and Robert Gill's Eternal Warrior #7 resonates with these sentiments. Once again, the 4001 A.D. adventures of Gilad Anni-Padda, the Eternal Warrior, echoes with the Luddites fear of progress, the inevitability of all technology in the hands of man being crafted to kill, and how innocence is subsumed by man's inherent capacity for cruelty.
Yea, I know, it's heavy stuff, but what would you expect in comic that revolves around an eternal WARRIOR? When I reviewed issue #6 of this series I wrote, “Pak writes weariness of character perfectly. Without having to say it, we know the Eternal Warrior has been through all of this before, knows how it will end, and would rather not be part of it.“ This weariness is even more evident in issue 7, but here, now, our hero has a clarity of cause and, though he remembers the past, he once again comes face to face with the tools necessary to repeat it. The only way to save those he loves is to start the cycle of killing again.
Pak gives his character a noble but loathsome purpose. Because of his eternal vigilance, he knows this particular form of eternal recurrence.
But Pak also sprinkles in the possibility of hope – Gilad's granddaughter Caroline. “She thinks the things we humans make can actually make the world a better place,” he ruminates. But then he punctuates it with “She hasn't seen what I've seen.”

Wunderlich: Eternal vigilance in the face of endlessly recurring evil—it’s the concept that makes everything in this book mean that much more. At its core, Eternal Warrior is a simple book with a simple hook. Gilad has been fighting forever (or at least thousands of years) and though he’ll always despise the necessity of war, violence, and murder, it’s what he’s best at. He wants to see peace, the end of evil and a better world, but knows this is a dream far from reality. It always has been and he fears it always will be, but he fights for it nonetheless. Understand this and you can pick up any issue of Eternal Warrior, past, present or (I imagine) future and you will find something to enjoy.
I like your fancy, heavy opening quote up there Elkin. Many moments in this book can be enriched with those words in mind. If everyone in Gilad’s world was as eternal as he, would his utopia be achieved? If the evil he faces had seen the things he’d seen, had been through what he’d been through and experienced the evils of the past, would the world finally progress past these endless cycles of killing?
I like to think Pak is reasoning along the same lines as us when he has Gilad finally encounter the enemy he was so intent on murdering. Without giving anything away, the final pages prove that progress depends on retentiveness. After all, Gilad’s skills as a warrior go far beyond his brawn.
The handling of said enemy is wonderful as well. You mention “the inevitability of all technology in the hands of man being crafted to kill, and how innocence is subsumed by man's inherent capacity for cruelty” and I think that’s right on the money. Pak purposely writes these villains as generally cordial people, forced by situation and then given the tools to do evil things.
Elkin: That's true, Wunderlich, until, of course, he introduces The Death Cult. Nothing is ever cordial about a Death Cult.
This arc is about a slow escalation. Step by step, the need for violence and killing seems to grow greater as the “cause” grows more urgent. It's like my grandpa used to say to me, “Stay around long enough and you get to watch everyone die.”

We've talked about how Pak has been able to balance the deep-rooted nihilism of his theme with a glimmer of hope for change. Will the circle of savagery be broken? There is always hope for the future, even in the year 4001. Without this little light, Eternal Warrior #7 would overwhelm its readers, thrusting them into a too dark place.
And I think the art team helps enormously with this. Artist Robert Gill can render the human smile so that it conveys as much welcoming warmth as it does a sense of innocence bred in a clear lack of not comprehending the ramifications of one's actions. There is a guilelessness in everyone's eyes that is counterbalanced by the weariness washed across Gilad's face. Colorist Guy Major then washes everything in soft tones, adding a soothing sensibility that swaddles the reader, providing a comfortable space, a sense a safety and warmth that, I have a feeling, will be ripped away as the story arc heads to its conclusion. And then finally, there's Dave Sharpe, using the tools of the Letterer to convey tone, heft, and accentuation. Through his art, Sharpe can even make the noises the emanate from the Carpentier Bennington Guard Bots seems almost cute. And that's a talent.

That's the balance.
Eternal Warrior has been one of my favorite series launched by the new Valiant because its team has done such an amazing job of holding tension. Quiet moments are soaked in the hues of the inevitable shatter, while bursts of action are kinetic and purposeful. The series refuses to be hoisted by its own petard because of this – as the story grows even more epic in scale we are reminded of the humanness at its core.
Wunderlich: Back to the art for a second, I must say I enjoyed the team’s efforts. Robert Gill is a new name to me and he impresses right out of the gate. His work is detailed, neat, and clear without being static. I’m with you on the eyes too, there are layers behind the characters’ looks and Gill gives us plenty to read into.
My big complaint here is the blurring effects used. It’s a huge pet peeve of mine and really distracts from the story. Gill’s art is dynamic enough without the motion blur. I’m not sure who’s to blame, but whoever is adding in these digital effects, stop it!