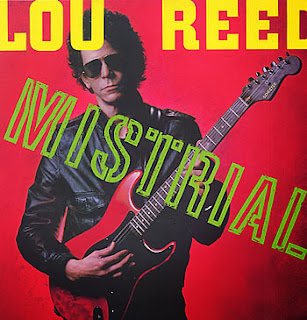 Oh gawd, this album. Mistrial is a mistake. It's probably the only Lou Reed album I will only listen to under extreme duress. In a way, it encompasses everything that went wrong in 1986 (even though so many things also went right) and I have no choice but to blame MTV for this hunk of crap, because I can, and so I do.

No Money Down – We're all “paying the price when there's no price to pay” for this entire fucking album. That drum machine. That synthesizer. That guitar sound. Fuuuuuck.

When this song first came out, I thought Lou was talking about the idea that love IS trust, which I can totally get behind. When I found out that he was actually talking about lovers trust, the whole thing soured. When push comes to shove, get the Harley revved up. Heh. Still, Lou does use that “HEY” punctuation in this song, though, which is all the rage lately. So there's that.


Video Violence – Yeah, so Lou is all upset about violence in media and how it desensitizes us to the real violence of life. I think Lou wanted to fuck Tipper Gore. Smarmy bastard.


The Original Wrapper – This song is the fetal form of the entire New York album that is to follow in three years. Here, Lou's getting all political, addressing some serious issues, calling out guys like Reagan and Falwell and Farrakhan, trying to be au courant. The problem is this fucking song is so awful on so many levels. “Watch out, they're goin' full throttle, better check that sausage before you stick it in the waffle, and while you're at it better check what's in the batter, make sure that candy's in the Original Wrapper.” I may have to sing this song at the next Talent Show I enter.