GROWING UP IN PUBLIC 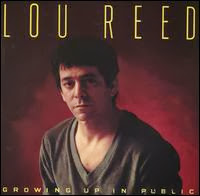 This is a pretty interesting album all told, filled with tales of Lou trying to kick his habit by drinking, stories of his relationship falling apart, and vitriol about his parents. Lou had an especially complex relationship with his Long Island Middle-Class Jewish upbringing – some real wild Oedipal stuff so I've heard, and he liked to be vicious in his songs about his folks.

This album is filled with the highs and lows that have begun to be the norm in a Lou Reed album. I'm especially fond of the album cover art for Growing Up In Public. Lou, in his v-neck sweater, looking all glum and serious and shit – it's like it was school portrait day and he was pissed mom made him wear his “nice sweater”.

Keep Away – this is Lou at his best, rambling all over the place to a simple chord progression. It is a love song – of sorts – but the relationship is co-dependent, twisted, full of promises that are so outlandish they can never be kept, promises that are self-abasing and cruel. It's passive aggressive; it's full on aggressive – it's the end and Lou draws it out and out until whoever he is singing this to or for has to be crying or screaming or running away, saving Lou the effort. What a fucker.


The Power of Positive Drinking – Yea, Lou thought it would be best to quit his drug habit by drinking it away. Remember, his week beats your year. This is a pretty funny song --- if it weren't so sad. I have to admit I kind of embraced this as a theme song for awhile there in my life. Still, the undulating rhythm and the sudden end to this song make it one that just kinda sticks around for you. Or, at least, for me.


How Do You Speak to an Angel? – This one covers all the themes of the album. He goes after his folks pretty viciously here, expresses his insecurities about relationships and connections, “pragmatic passions”, and sense of self. Then he's got this bridge in the song – all hand clapping and choral backup – that just takes this song to a whole new level. Then it ends with the most pragmatic rock and roll relationship advice I've ever heard. Quite a ride here, Lou. Thanks for taking me on it.