He subsequently asked me to recommend some songs. This was the inspiration for this series of posts (as well as an excuse to go through the entire Lou discography again). This series will focus on Lou's solo career only, a historic overview, from 1972's Lou Reed to 2000's Ecstasy. What follows is hardly definitive, short-handed at best, and purely my opinion. 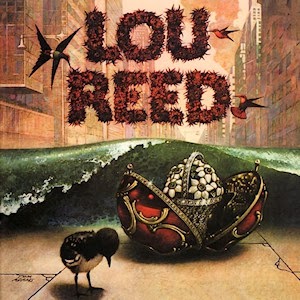 Two years after leaving The Velvet Underground, Lou settled down in 1972 for his first solo album for RCA. It's my impression that Lou was pretty unsure of himself at this point, as this album is pretty much comprised of unreleased VU songs. Unfortunately, Lou didn't have Cale or Morrison or Tucker or Yule backing him for this, so what came out was kind of a mess.

Best songs:
Lisa Says -- Although the Velvet Underground version is far superior, this one has a kinda groove.


I Can't Stand It -- Once again, the Velvets recorded a much better version of this song, but Lou sounds so fucking earnest on this cover it kinda climbs under your skin and becomes an itch that's hard to scratch.

Ocean -- Yea, another song Lou did soooo much better with the Velvet Underground, but once again the nakedness of his voice on this version makes you want to like it. Lou's a little boy here, wanting you to take him seriously at any cost.