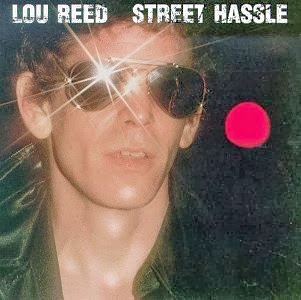 Now THIS is a Lou Reed album – or at least a Lou Reed album as I define the term. It's thick and viscous and grating and full of attitude. It also has some beautiful poetry and some incredible songs. Combining studio work with live recordings, Street Hassle is certainly in my top five of favorite Lou Reed solo studio albums – it's the Lou he wants you to remember.

When this album came out, Lou had already been christened the “Godfather of Punk” and Street Hassle lives up to that moniker. So many of the themes he had been working with in his body of work -- addiction, isolation, cruelty, disassociation, filth – found a mature voice here.

It's not a make-out album, it's not a dance album, it's not even a particularly good album to take on a road trip. What it is, though, is the quintessence of an artist, understanding his role as a creator.

Best songs (this is tough, because I pretty much love every song on this album):

Street Hassle – The title track is this eleven minute composition that tells a self-contained story of abuse, horror, and resignation. It is divided into three parts, “Waltzing Matilda”, “Street Hassle”, and “Slipaway” (featuring Bruce Springsteen on vocals) – it features movie soundtrack orchestration, soaring choral music, and this heartbeat beat. It is mesmerizing and beautiful and absolutely one of Lou's best songs.


Gimmie Some Good Times – starting with the riff from Sweet Jane, this song has Lou whining for some good times and some pain – because everything is ugly and you know it's all the same. Lou's singing is really weird on this track, but it's perfect for this kind of song. It's a punk rock ethos and it's all Lou, baby.


I Wanna Be Black – The rock critic Lester Bangs referred to this song as something like “The most honest rock and roll song ever written.” It's pretty offensive, racist, and misogynist, but the chorus stating “I don't want to be a fucked up middle class college student anymore” puts the song in its proper perspective. Was Lou racist? Of course it's hard to say, but he surrounded himself with all sorts of weirdos and freaks of every shape, size, and ethnicity it is hard to pin him down on this one. Was he a misogynist? To a great extent, yes, but he also was a humanist and was a vocal supporter of women's rights and the pro-choice movement. As with all of his music, Lou adopted personas. This persona was maybe not his best, but you know what – he could give a fuck what you thought. And that's Lou.