For me, it has always been about the music. To this end, this series focuses on Lou's solo career only, a historic overview, from 1972's Lou Reed to 2000's Ecstasy. What follows is hardly definitive, short-handed at best, and purely my opinions. 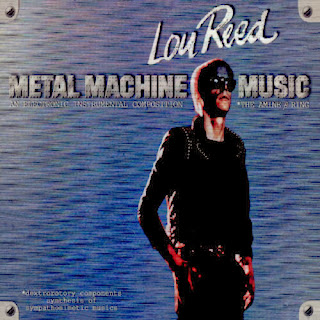 Lou Reed and Amphetamines. Lou had a pretty heavy drug problem in the mid-70's; he was purportedly shooting up massive amounts of speed during this time.

He was also an asshole.

This combination led to the creation of Metal Machine Music – an album unlike anything he had put together prior or subsequently. This is an assault more than an album.

Lou was at the peak of his popularity at the time, with Sally Can't Dance and two live albums charting high and making RCA some money. This album was his drug-fueled, career-killing, fuck you response to his own success. It's a room clearer. It's a brain bender. It is what it is.

The liner notes for the album are the best thing about it:

Passion--REALISM--realism was the key. The records were letters. Real letters from me to certain other people. Who had and still have basically, no music, be it verbal or instrumental to listen to. One of the peripheral effects typically distorted was what was to be known as heavy metal rock. In Reality it was of course diffuse, obtuse, weak, boring and ultimately an embarrassment. This record is not for parties/dancing/background romance. This is what I meant by "real" rock, about "real" things. No one I know has listened to it all the way through including myself. It is not meant to be. Start any place you like. Symmetry, mathematical precision, obsessive and detailed accuracy and the vast advantage one has over "modern electronic composers." They, with neither sense of time, melody or emotion, manipulated or no. It's for a certain time and place of mind. It is the only recorded work I know of seriously done as well as possible as a gift, if one could call it that, from a part of certain head to a few others. Most of you won't like this and I don't blame you at all. It's not meant for you. At the very least I made it so I had something to listen to. Certainly Misunderstood: Power to Consume (how Bathetic): an idea done respectfully, intelligently, sympathetically and graciously, always with concentration on the first and foremost goal. For that matter, off the record, I love and adore it. I'm sorry, but not especially, if it turns you off.


One record for us and it. I'd harbored hope that the intelligence that once inhabited novels or films would ingest rock, I was, perhaps, wrong. This is the reason Sally Can't Dance—your Rock n Roll Animal. More than a decent try, but hard for us to do badly. Wrong media, unquestionably. This is not meant for the market. The agreement one makes with "speed". A specific acknowledgment. A, to say the least, very limited market. Rock n Roll Animal makes this possible, funnily enough. The misrepresentation succeeds to the point of making possible the appearance of the progenitor. For those for whom the needle is no more than a toothbrush. Professionals, no sniffers please, don't confuse superiority (no competition) with violence, power or the justifications. The Tacit speed agreement with Self. We did not start World War I, II or III. Or the Bay of Pigs, for that Matter. Whenever. As way of disclaimer. I am forced to say that, due to stimulation of various centers (remember OOOOHHHMMM, etc.), the possible negative contraindications must be pointed out. A record has to, of all things Anyway, hypertense people, etc. possibility of epilepsy (petite mal), psychic motor disorders, etc... etc... etc. My week beats your year.

Fuck it, here's the whole album.