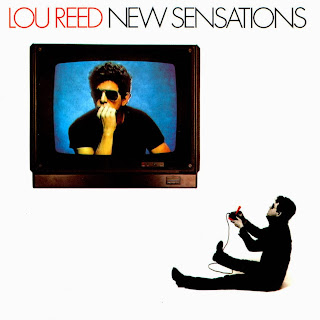 The mid-80's brought us a new Lou, clean and sober, who brought to the studio a sense of playfulness and mirth. The aptly titled New Sensations is more of a pop album than a rocker, and with this album good old grizzled Lou started on a multi-media blitz in order to cement his face on the Mount Rushmore of Rock.

New Sensations is easy to dismiss as insipid, light, and bereft of any real intellectual value, but then again, one could say this about a lot of the music in 1984. Throughout the album, Lou seems to be looking to you to bring him home, give him a sandwich, and allow him sit on your couch to watch the Grammys.

Doin' The Things That We Want To – Lou wants to meet Sam Shepard and Martin Scorsese. So he wrote a song about that. His guitar is open and he strums it with a gentle touch. The whole band comes in mid-way and Lou gets even more earnest. It's corny, but catchy. Lou's singing here is actually singing.


Turn To Me – That's right, Lou's the one you want to call when life becomes difficult. He's always been known as a compassionate, empathetic guy. He loves you. He's got your back. Unless you're married to him and want to have children.


My Red Joystick – When Lou makes penis puns, we all have to laugh, right? This mild funky groove is all about Lou hating women (his wife Sylvia especially), blaming them for all of man's woes, and trying to avoid emasculation. If that characterization of this song bothers you, let's go surface level and remember that Lou loved his video games which, at that time, were all about joysticks.