This column originally ran on Comics Bulletin
Sometimes the most universal truths can be found in the smallest slices of life. That’s what makes independent documentaries so powerful, engaging, and entertaining. Not only do they show you little worlds to which you’ve never had access, but they oftentimes also tell the larger story of what it means to be human. Armed with this intellectual conceit, a bag of Funyuns, and a couple of Miller beers, Daniel Elkin curls up in front of the TV and delves deep into the bowels of Netflix Streaming Documentaries to find out a little bit more about all of us.
Today he found 2009's Objectified by Gary Hustwit.

Objectified is a documentary about industrial design, the products and the people behind them. It is also a film about our relationship with the objects around us, both in how we use them to define ourselves, as well as interact with the world. It is also about the unintended consequences of the preponderance of objects in our lives.

This is a beautiful movie. Objectified seems to be as much a product of careful design intention as the objects which it celebrates. There is a clean sleekness to the film that allows the narrative to flow in a seamless manner. The story of Objectified is told through a series of interviews with some of the top designers in the industry, people whose names and faces you may not recognize, but many of their designs have permeated our culture to such an extent that the products themselves have almost reached an iconic place in our consciousness.

Objectified gives its audience some historical perspective on the field of industrial design, originating from the need to mass produce arrows for ancient Chinese archers. Design has become so pervasive now, though, that nearly every man made object you come in contact with in your daily life was first part of someone's presentation to a manufacturer. Take a look around you right now. From the device upon which you are reading this column, to the glass you keep your beverage in, to the phone nearby, to the clock on the wall, to the chair you are sitting upon, to the clothes on your back, all of it was designed by someone. How it looks, how you interact with it, and, more importantly, how you feel about the object are all the result of the decisions of the designer. As the movie says, “Everything that fills the world has been designed.”

Designers make our stuff. The greater the emotional bond you have with your stuff, the more the designer of your stuff has succeed at his or her job.

The easier and more intuitive it is to accomplish what you want your stuff to do, ostensibly the reason you purchased that stuff, the better designed it is. 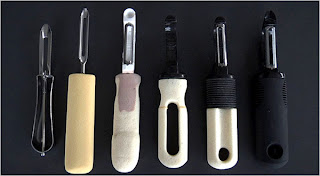 Good design allows us to use our stuff to send a message to the larger society about the kind of person we want others to perceive us as. The aesthetic of the object becomes the aesthetic of our selves. As one of the designers in Objectified intimates, objects can be our avatars. You purchase stuff carrying with you an idea of an audience in your head, and judge your stuff whether or not it makes the kind of statement about who you are that you wish to portray.

In the end, Objectified ends up being a celebration of stuff and the commodification of the individual. The more we surround ourselves with stuff, it seems to me, the less of our own humanity we actually express. The objects become the message we convey. Instead of through ideas or actions, we are now able to make assumptions about individuals based solely on the stuff with which they surround themselves.

And then there is the other issue about design that the film does a cursory job acknowledging. Design is done with the intention of selling the product. Companies use design to get people to buy their stuff. In our culture, there is this constant drive to get the newest, latest, best stuff and design fosters this drive. So companies produce more and more stuff and consumers buy more and more stuff. In fact, our entire economy is based on this principle to a certain extent. Industrial design is at the heart of profit.

Have you ever wondered why there are so many self-storage places cropping up all over your neighborhood? My sense is that people have already filled up their living spaces with stuff and need to rent an apartment for the rest of their stuff.

It's kind of gross, if you ask me, and can be seen as a true reflection of this commodification of the individual about which I have been talking.

And it all starts with design.

Objectified brings up the point that most of the industrial design work that designers do is for the 10% of the world's population that already has too much stuff. It points to the fact that much of the design work of the past is now populating landfills all over the country. The film begins to talk about the fact that sustainability is one of the most important aspects of modern design, otherwise we are all doomed to be buried in our stuff.

And this, I think, is why this documentary is important. It is a springboard to a larger discussion.

Now don't get me wrong. I appreciate the beauty of a well designed object. I will freely admit to coveting a couple of Crate and Barrel Bookshelves they have in their Holiday Catalog, as well as my neighbor's I-Pad 2.

But am I willing to start defining myself by my stuff?

How much stuff do I need to complete the image of myself that I wish to project?

Or does my stuff actually start to influence who I see myself as and how I interact with the world?

Watching Objectified raises these sorts of questions. At least it did for me.

As economic realities begin to make people reassess their priorities, perhaps one of the things they should be considering is all their stuff.

Clip from the film: