Random Pulls from the Bargain Bin

This column originally ran on Comics Bulletin
In these economic times, finding inexpensive entertainment is difficult. Thank goodness for the local comic shop and a slew of comics nobody cares about anymore! Each week Daniel Elkin randomly grabs a comic from the bargain bin (for 50 cents) to see what kind of bang he can get for his two-bits. These are those tales.
December 7, 2011 – paid 50 cents for:
COYOTE #7
Published by: Epic Comics
Written by: Steve Englehart
Art by: Chas Truog 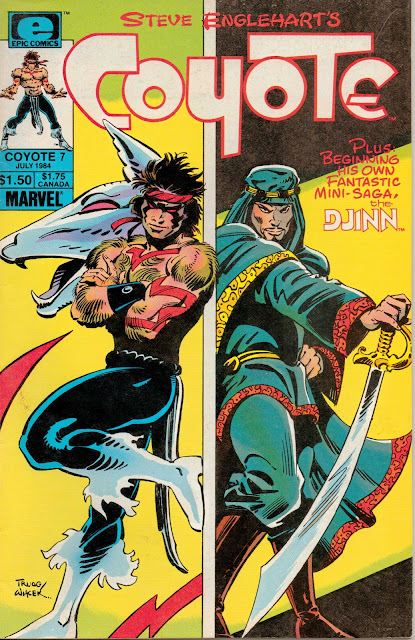 SOOKIN SIN!
“My fellow Americans, I'm pleased to tell you today that I've signed legislation that will outlaw Russia forever. We begin bombing in five minutes.” It's August 1984 and the leader of the free world at the time, the venerable Ronald Reagan, spews this into a live microphone during a voice check before recording his weekly radio address. Sure the geezer is just telling a joke. Sure it's not broadcast (although later leaked). But do you remember 1984? Things were kind of tense in terms of our relationship with the Soviet Union. There were nuclear weapons pointed at each others' faces. To have the President of the United States make this kind of joke in the midst of these tensions still kinda makes my testicles retract into my abdomen.

Hell, in August of 1984, John De Lorean got acquitted of 8 charges of possessing and distributing cocaine. Even Doc Brown was surprised.

First, a note about Epic Comics. According to everyone's favorite source of information, Wikipedia, “Launched by editor-in-chief Jim Shooter as a spin-off of the successful Epic Illustrated magazine, the Epic imprint allowed creators to retain control and ownership of their properties. Co-edited by Al Milgrom and Archie Goodwin, the imprint also allowed Marvel to publish more objectionable content (sometimes explicit) without needing to comply with the stringent Comics Code Authority. "

Second, a note about Steve Englehart. This is a man who knows what he is doing when it comes to comics, having created some definitive runs on the Avengers, Batman, Captain America, X-Men … hell, even Luke Cage.

Finally, a note about Coyote. According to the back of the front cover of Coyote #7, “Raised in the desert among supernatural spirit beings, Sylvester Santangelo has always had abilities that most humans lack – the ability to change the appearance of reality, and to dance between dimensions, above and around the solid, ordinary world. Only recently has he begun to learn who and what he truly is and where his abilities come from. The American Indians' Coyote God – once the dog of their all-powerful Great Spirit – saw that his worshipers were being gradually oppressed and exterminated by another people he could not understand – the invaders from Europe. The Coyote God worked for years to create a European who would be one of his own, a human being who could mingle with the invaders, but who embodied the powers, spirit and character of … COYOTE.”

For the last six issues of Coyote, Sly Santangelo has been fighting against something called the Shadow Cabinet, a “subversive organization of immense mystic, political, and economic power” (kinda like the Tea Party). Recently Sly/Coyote has been hanging out in Vegas doing his whole “infiltrating” thing. He has just been hired by the Shadow Cabinet to kill “the mysterious Soviet agent who is also a living weapon; X-Caliber. Instead, he captured his enemy, and now must use all of the strange abilities at his command to learn X-Caliber's secrets”

All these quick notes lead us to this: 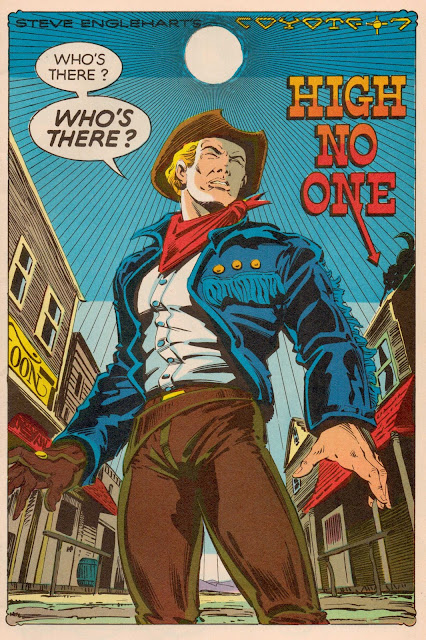 I'm not really sure what to say about this. It's dramatic, certainly, and I like the pun entrenched in the title of the story-line, but there's something a little wonky about this page. Perhaps it is the overabundance of parallel lines radiating from the white hole at the top of the page. Maybe it's because the perspective sort of highlights this gentleman's “package” – I don't know what it is. I do have the sense that artist Chas Truog and I are going to have some issues, though, throughout this book. 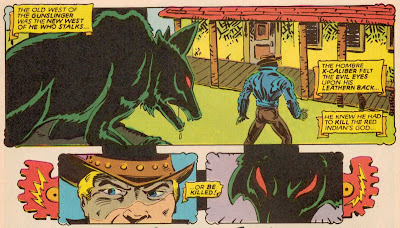 OK. Still. I'm not sure what to make of Truog's art so far. It seems as if he is trying to mimic a certain Southwestern sensibility to some extent, but there is something about his lines. They are messy or something and it becoming a distraction.

But to the story. X-Caliber seems to be a cowboy, a gunslinger, and he's in conflict with a Coyote. These things happen sometimes.

Four bare-chested Native American gentlemen suddenly rush X-Caliber from out of a set of swinging doors yelling “AI-YAI-YAI-YAI-YAIIIIIIIII!” X-Caliber pivots and “PLOW”s them down with “his six guns” which seem to be embeded in his right forearm. This act causes his arm to burst into flames. X-Caliber then sees a Coyote leaping from the rooftops. He adjusts his forearm so it becomes a cannon of some sort, and with a “PTOKH PTOKH” tries to blast the canis latrans. 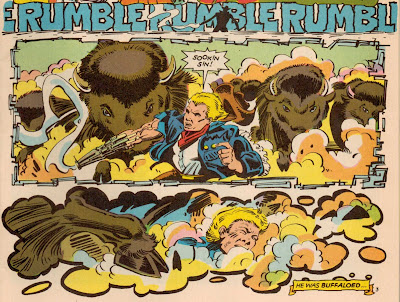 What the hell is going on here?

Well, it turns out these are all the products of some serious mind-games courtesory of one Sly Santangelo. 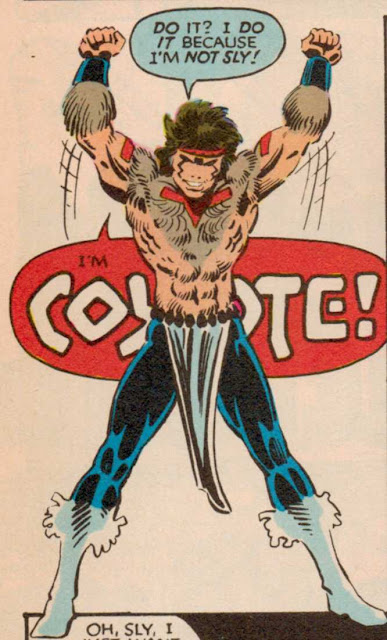 Excuse me, I mean COYOTE! Woot. He's “from the other side of the dance.”

Coyote and some full-lipped blonde named Cassie are trying to pry information out of X-Caliber's brain using some Native American Coyote God mind tricks. Coyote seems to be having fun with the process. Cassie just wants him to hold her.

The comic then cuts to a side story about some former Vegas prostitute named Lizette who has found both Jesus and herself alone in the Nevada desert. Coyotl, the original Coyote god, is trying to help her out while at the same time using the situation to bad-mouth the god of the Conquistadors.

Back into X-Caliber's brain, he's now shooting at attacking cacti. Suddenly, in response to the stress of hallucinating that a canis latrans is about to rip out his throat, X-Caliber reveals that he is a former agent of the Soviet KGB, and that Yuri Andropov (former head of the KGB and leader of the Soviet Union) recruited him to get his right arm removed and replaced with this cool gun thing.

Cassie uses this revelation to provide one of her own. She apparently slept with some character named Halfdome. 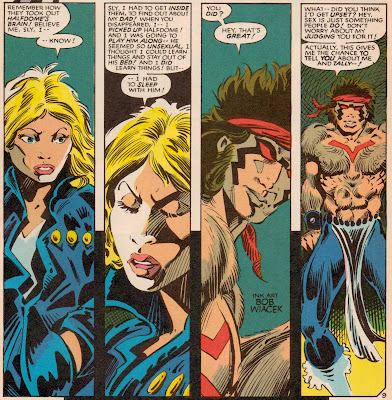 Coyote shows he's been watching a lot of Dr. Phil.

OK, Truog, you've redeemed yourself in three panels. I love the way he paced Cassie's reaction to Coyote's news here.

Through some more mind tricks, Coyote finally gets X-Caliber to come clean about everything he has been hiding: 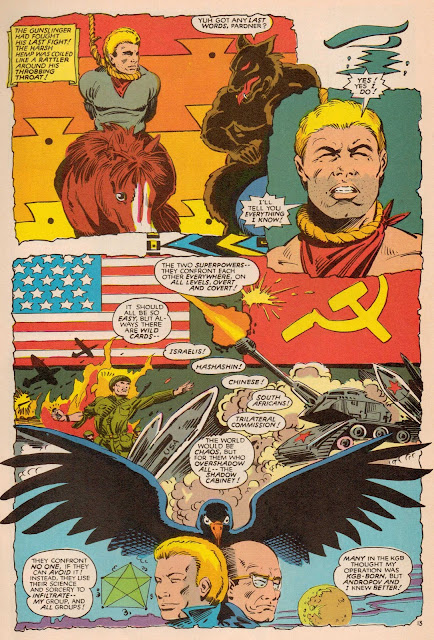 But I'm a little confused. It seems that from what X-Caliber reveals here, this Shadow Cabinet is actually the only thing that is saving the world from chaos. Humanity would have been destroyed by either the U.S. or the Soviets or these Wildcards were it not for the influence of the science and the sorcery of the Shadow Cabinet.

Isn't this a good thing?

What's the angle here? What am I missing?

Unfortunately, Coyote #7 doesn't want to provide me with any answers. Cassie says the Shadows are cruel. Then she accuses Coyote of the same level of cruelty (because of his enlightened and modern attitudes about human sexuality?), and then she storms off leaving Coyote and X-Caliber alone.

And then the comic ends with this: 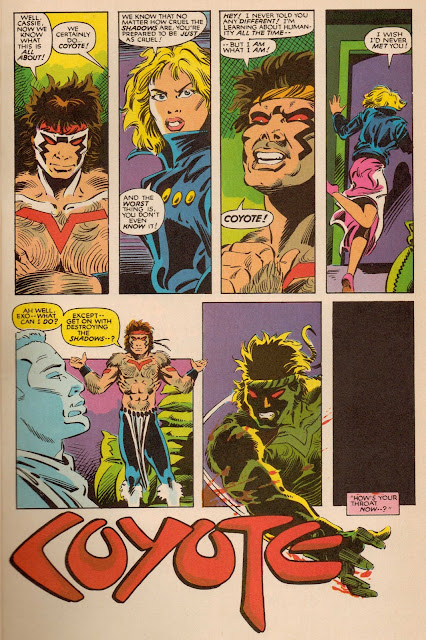 At the beginning of this column, I quoted our 40th President joking about Nuclear Armageddon. Coyote #7 seems to be part of that zeitgeist, except it is adding layers of Shadow Cabinets and Native American Mythology to the inherent paranoia of the times.

Was this a way of making sense of the massive uncertainties that permeated our national consciousness? Is it a satirical look at the foibles of political conflict? Is it a “back to the purity of Native Culture” diatribe? Is it all of these? Is it none of them?

I want to trust that Englehart knew what he was doing with the series, and I probably should read more of it before I either make judgments about or cast aspersions upon it. As a single piece of entertainment, though, especially one that I invested my hard earned two-bits to procure, it muddies the waters so heavily that it ends up parching more than hydrating (or have I completely convoluted my metaphor here).

The mid-80's were a time of great prosperity for America, certainly, but it was also a time when we all wandered about with the nagging sense that the annihilation of humanity as a result of a nuclear conflagration could happen at any moment.

In the mid-80's we learned in school that hiding under our desks in the event of a nuclear explosion would be about as effective as using two rolls of toilet paper as a raincoat in a monsoon. We learned that even if the blast didn't kill us, either the radiation or the Nuclear Winter surely would. This was the constant in my upbringing (that and the many iterations of Menudo), and I have the sense that it played a pivotal role in the formation of the much-hyped Generation X malaise.

It was also, I think, what made me turn to comics as an escape.

But I'm not sure how Coyote #7 fits into all this.

Which leads me back to the questions I was asking above: Was this comic a way of making sense of the massive uncertainties that permeated our national consciousness? Is it a satirical look at the foibles of political conflict? Is it a “back to the purity of Native Culture” diatribe? Is it all of these? Is it none of them?

I can't wrap my head around an answer. But this uncertainty may be one of the best by-products of this book, because, if nothing else, it has certainly made me think and question.

And sometimes, that's what we should expect from our entertainment.