Random Pulls from the Bargain Bin
THIS COLUMN ORGINALLY RAN ON COMICS BULLETIN.
In these economic times, finding inexpensive entertainment is difficult. Thank goodness for the local comic shop and a slew of comics nobody cares about anymore! Each week Daniel Elkin randomly grabs a comic from the bargain bin (for 50 cents) to see what kind of bang he can get for his two-bits. These are those tales. 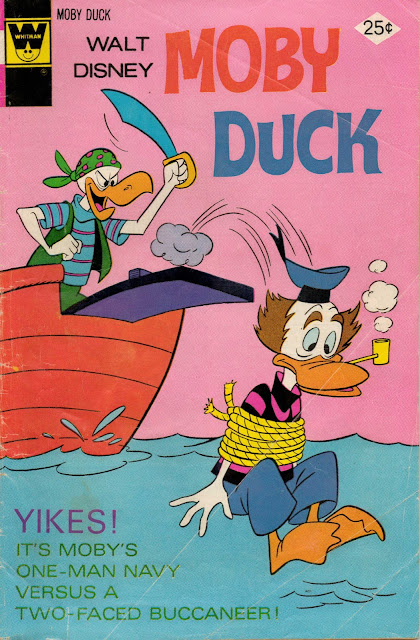 OH, SCUTTLE ME DUFFLEBAG!
December 1975 was a time of duality. While Carlos the Jackal kidnapped delegates at the OPEC conference in Vienna, Punk magazine released its inaugural issue with a drawing of Lou Reed on the cover.

Speaking of Lou Reed, in December 1975 he released his album Coney Island Baby. As a counterpoint, The Bay City Rollers released Wouldn't You Like It.

One Day at a Time premiered on CBS and foisted Valerie Bertinelli into wet dreams of teenage boys across the country. To provide the Yang to this Yin, the writer Thornton Wilder died.

In the strangest juxtaposition of them all, December of 1975 saw the formation of the band Iron Maiden and the birth of Milla Jovovich.

Into this heady brew of duelism, though, a singular event was shot across the national bow. This event was the publication of Moby Duck #21.

Thirty-six years later, I close my eyes (only for a moment, and then the moment's gone), reach into the bargain bin at my local comic shop, and grab hold of a rather worn copy of Moby Duck #21, missing its first two pages.

Luckily for me (and you), Moby Duck #21 has two stories contained within its cover. The first story, the one missing the pages, concerns Moby's tribulations with a “Two-Faced Buccaneer”. The second story in this comic remains intact and is called “The Dread Sea Adventure.” It is this story that shall be the focus of this installment of Cheap Thrills.

By way of background, Moby Duck was part of the Disney Duck Family. His first appearance in comics was in Donald Duck #112. He is a Whaler (more on that later) and had a porpoise side-kick aptly named Porpy. Moby had his own comic book for thirty issues, but then fell out of favor (more on this later), and is no longer present at the dinner table during Disney Duck Family gatherings (much to the relief of Daisy Duck, I'm sure).

The backup story, “The Dread Sea Adventure” in Moby Duck #21 begins with Moby smoking his pipe and sleeping in a hammock, having just “sold a whale.” 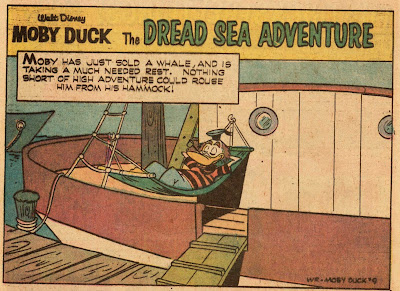 Nothing sort of high adventure could rouse him, hmmmm? How about Scrooge McDuck's shipment of tractor inner tubes having gone missing in the DREAD SEA? High Adventure Indeed!

See, Grandma Duck can't plow her back forty because her tractor has a flat tire. The ever miserly Capitalist McDuck wants to help her, and he has gone the foreign import route for tractor inner tubes as that is the best deal. Grandma, though, has more of conscious about these things:

Damn right, BUY LOCAL, Grandma! Does Grandma Duck get credit for instigating the Buy Local Movement? I never hear her mentioned. It must have something to do with her close ties to Corporate Fat Cat Scrooge McDuck and his media-spin machine.

According to the comic, it turns out that the foreign shipment of tractor inner tubes was pirated by a “Sheik Chieftan and his band” who harpooned the ship and dragged it to land.

This fact fills McDuck with a greed induced rage (the worst kind of rage), and he confronts the captain of his boat: 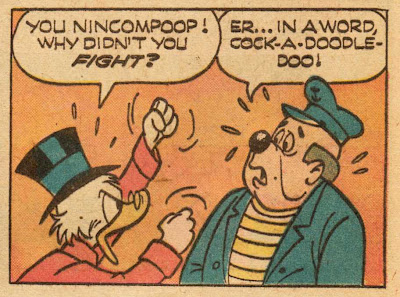 Is “Cock-A-Doodle-Doo” actually one word? Is it even a word? And just look at all that sweat flying and fists waving! These are stressful matters. Precious cargo has been pirated and money has been lost!

Grandma then asks the all important question: 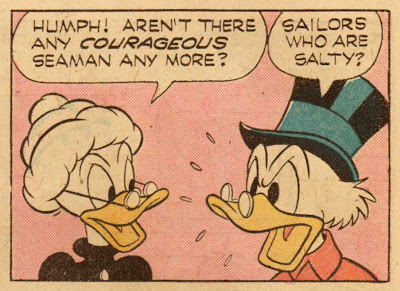 All the double entendre jokes I could make here aside, this is the moment of “High Adventure” strong enough to lure Moby Duck out of his Whale Selling reverie! He swings in to offer his assistance (for a 10% cut, of course – this Duck ain't no fool after all). Grandma Duck shows her starch by accompanying Moby on his tractor inner tube recovery mission as his hired hand (this Duck ain't no fool either).

OK, I finally have to interrupt this narrative with some bile. First off, let's talk about why nobody seems to be interested in Moby Duck anymore. To begin, there is the fact that he made his living through the practice of Whaling. Moby Duck has got a big old harpoon gun on the front of his boat which he uses to shoot a big old harpoon into a whale so he can kill it and sell its dead carcass to whoever wants to buy it, a practice no longer in vogue, to say the least. Second, Moby goes around calling Bedouin's “Camel Raisers” which is about as politically correct as being a Whaler (unless, apparently, you are running for the Republican nomination in this Presidential election).

Let's face it, Moby Duck is just not good for Disney's image anymore. You will be hard pressed nowadays to find a little toe-headed gap toothed child who would pester his or her parents incessantly to purchase him or her the Whaling Racist licensed products (not to say that these children don't exist, just saying you would be hard pressed to find them). And Disney, ultimately, is all about the money. They'll tell you they are all about bringing joy, happiness, and entertainment – but this is a enormous corporation and Moby Duck just don't have the ROI anymore.

So Goodbye, Moby Duck (It seems to me you lived your life like a candle in the wind).

Back in the comic, though, the South Side isn't the problem, baby – so what's goin' on North Side. 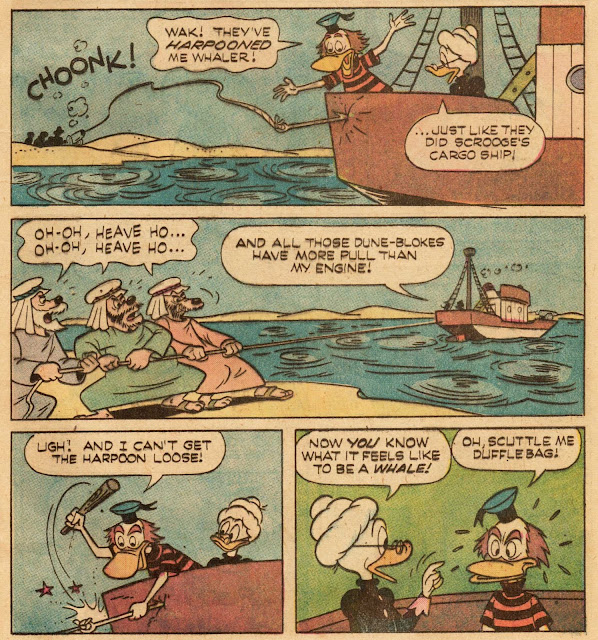 After Grandma Duck goes all Greenpeace on Moby's ass above, what else is he going to say except, “Scuttle Me Dufflebag”? That's what I always say when Greenpeace calls me during dinner asking for money.

So anyway, the North Side Bedouins (remember them from The Warriors?) don't care that Moby and Grandma aren't carrying any cargo. They are looking for “Windy-Mouth Helpers” instead.

Once again, putting aside all of the double entendre jokes I could be making here, the North Side Bedouins demand that Moby and Grandma inflate those Tractor Inner Tubes recently commandeered.

Moby and Grandma “spend a huffing and puffing afternoon inflating inner tubes,” but are unclear as to the goal behind this endeavor.

The North Side Bedouin Chieftain tells them they want the tubes on their stallions.

It's not what you think (Man, you have a dirty mind).

What he means is this: 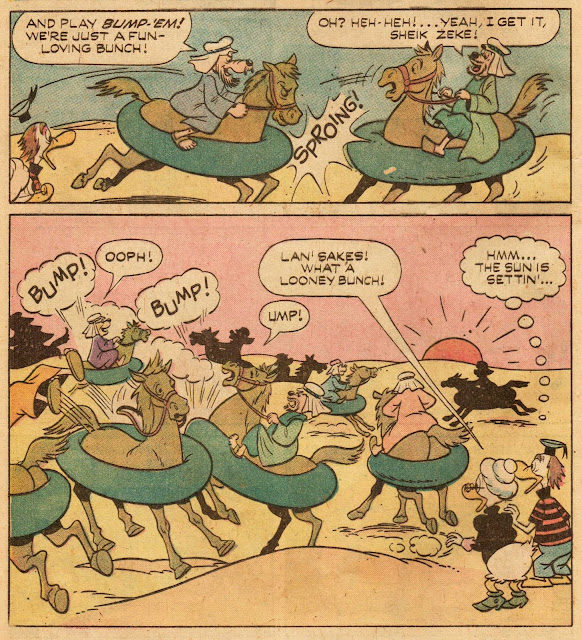 Man, PETA must hate this comic.

As the sun sets on this new Olympic Sport, Moby and Grandma take this opportunity to sneak off. They hop on the back of Porpy (NOT a double-entendre) and go South Side over to the “Camel-Raisers” to warn them of “the coming invasion on horse-back by sea.”

Honestly, in all my life, I never thought I would type the phrase “the coming invasion on horse-back by sea.” Then again, I should have paid more attention to Lyle Lovett.


Anyway, the South Side Camel-Raisers have very little in the way of a defense budget (being a Camel-Raising based economy), so Moby and Grandma take it upon themselves to meddle in the affairs of the Middle-East (this comic is becoming more and more politically incorrect with each passing panel). 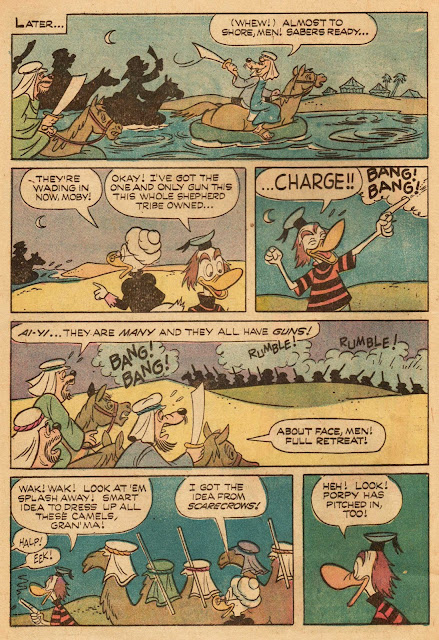 The North Side Bedouins high-tail it from what they see as the superior fire-power of the South Side. As they are horse-back retreating by sea, Porpy pops the tubes with his teeth (literally – man, you have a dirty mind), and does the proverbial “kicking a Bedouin when he's down” trick. Like a true American.

Moby and Grandma load up the Tractor Inner Tubes and sail back to McDuck triumphant. But McDuck ain't pleased to see them. As it is all about the Benjamins for McDuck, he is insensed that some of the tubes are punctured (a la Porpy).

So the comic ends with this:

Actually, the comic ends with an ad for 11 1/2” Fashion Dolls that Do Fun Things (Dusty and Skye), but that is for a different column some day.

Now what can I say about Moby Duck #21 to wrap up this column?

For fifty cents I was amused, bemused, abused, and confused by this comic. As what passed for entertainment targeted to kids in the mid-70's, Moby Duck #21 sure does help explain why my generation has the political guilt that it does. When you find yourself, as part of your entertainment, rooting for a Pipe-Smoking, Racist, Capitalist Whaler in your formative years, you end up questioning quite a bit as you age as to what your priorities are.

Somehow we all made it through though, right?

Somehow many of us were able to put aside these Disney Duck tales and turn our focus on better Duck role-models.

At least I never said anywhere in this column that Moby Duck #21 got me all “Ducked Up”.