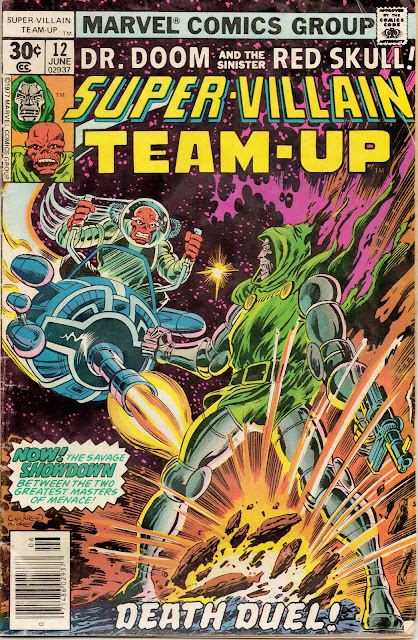 HURRY WITH MY OXYGEN APPARATUS, SCUM!
It was June of 1977 and everything was jumping! We continued our obsession with Star Wars, but were also offered other tasty treats like the Exorcist II, For the Love of Benji, and the classic Herbie Goes to Monte Carlo. Kiss had been elected the most popular band in America by a Gallup Poll, Ted Nuget released Cat Scratch Fever, The Alan Parson Project released I Robot, and the Sex Pistols chartered a boat and sailed a fateful journey down the Thames during Jubilee. Apple II computers went on sale, women were integrated into the regular Marine Corps, the Portland Trail Blazers beat the Philadelphia 76ers in the finals, and Elvis performed his last ever concert in Indianapolis. June of 1977 had everything going for it. It was also when Marvel Comics published Super-Villain Team-Up #12, fully flowered with hyphens, hyperbole, and humongous alliterations, to the point where it rubs off on the reader.

The cover of this comic depicts our team-up members in full explosive poses. The towering turquoise wording adds to the excitement: “NOW! The Savage SHOWDOWN Between The Two Greatest Masters of Menace!” When Doctor Doom and the Red Skull battle, the alliterations fly! This issue’s title is even alliterative: “Death-Duel” and its got another hyphen!

One point of confusion, though. The first page has this masthead:

I thought the team-up was Doom and Skull. Was Marvel Super-Villain Team-Up a vehicle for the Sub-Mariner? I mean, it would make sense, given the hyphen in his name. If anyone has an answer here, let me know.

The comic begins with the alliterative “Rockets Roar” as the “Doomship” (what, no hyphen?) cleaves “thru earth’s fragile, atmospheric shell” carrying Dr. Doom and The Shroud, Marvel Comic’s own Batman wannabe. They are heading into space to stop the Red Skull from firing the “Hypno-Ray Device” which will make zombies of the human race. I’m pretty sure that the Skull chose this particular dastardly device for its hyphen.

Apparently Captain America has made Doom take the Shroud along in order to ensure Doom doesn’t wrestle the Hypno-Ray Device from the hands of the Skull, only to use it himself. Interestingly, the Sub-Mariner IS actually in the book for a mere two panels, long enough for him to tell Captain America that he has no inherent interest in this whole “stopping the Skull” escapade as the Hypno-Ray Device will not work on him or his fellow Atlantians. That’s it, though -- long enough to lend his hyphen, I guess. 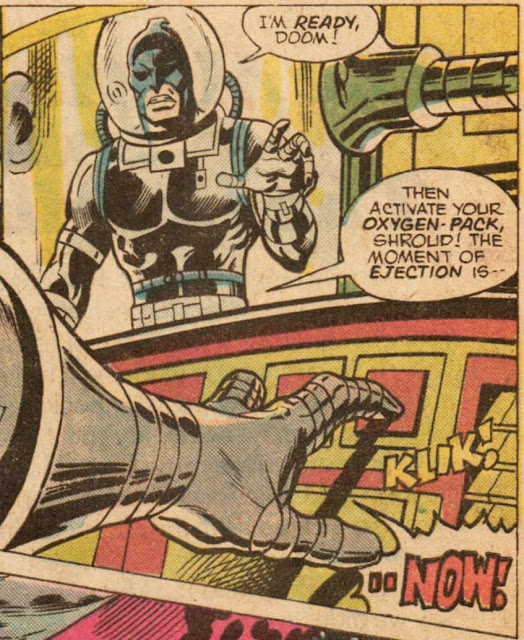 In case you missed it, the moment of ejection is … NOW!

As the Shroud heads towards the deadly device, Doom zooms off to confront the Red Skull, who is expecting him: 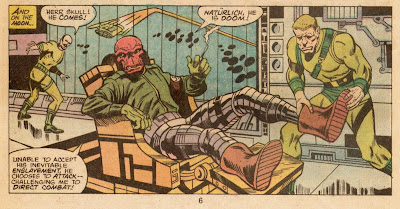 Reclining in his Battle Barcalounger while some green-suited, monkey-faced lugubrious lackey is putting his orange boots on, the Red Skull is quite the picture of evil here. His cigarette holder really brings out the schwa in his swastika, don’t you think?

Witless Wilhelm, one of the lackeys, makes the sorry suggestion that the Red Skull could possibly lose this upcoming savage showdown. In response, the Red Skull goes full flown nasty Nazi on Wilhelm:

Oh No You Didn’t! That is some serious frightening fecal matter! These four panels alone are sure to give me nasty Nazi nightmares for many miserable months!

Doom arrives and the Skull gets ready to rumble. Before battle, though, he takes time to lambast his lackeys in a scene that for some reason resonates with the moment in Macbeth before Macbeth goes to face MacDuff: 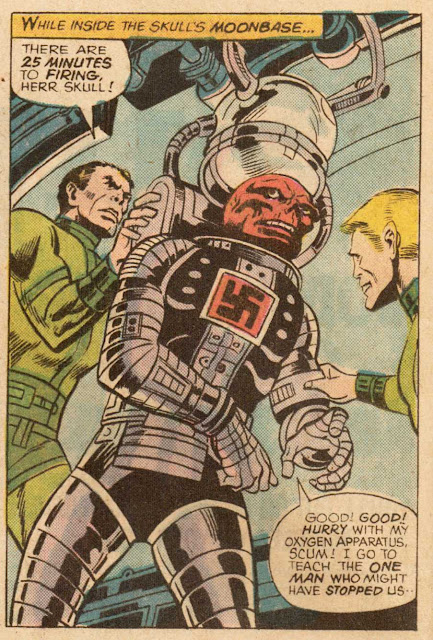 Hurry with my oxygen apparatus, scum – indeed! No alliteration or hyphens needed here.

So, Doom lands on the moon and awaits the arrival of the Red Skull. In a matter of only one pitiful panel, the Skull surfaces riding a rather ridiculous rocket with a prominently prodigious projection: 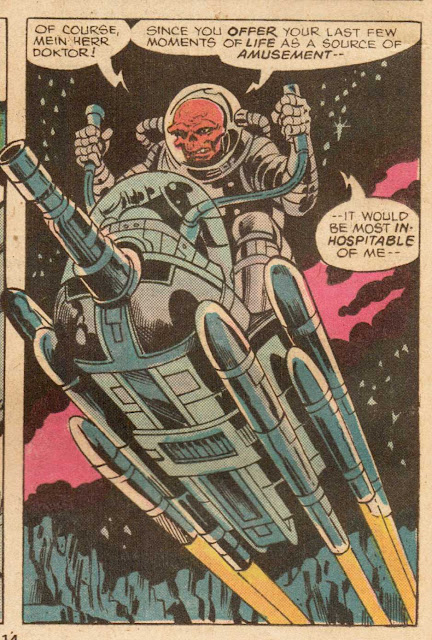 I always thought the Nazis were compensating for something, but come on!

Doom and the Red Skull begin a behemothic battle that involves highly hyphenated weapons of war, including: a rocket-sled, force-fields, force-blasters, and stun-mines. While the battle boils, we are reminded of the sightless Shroud and his tinkering with the hazardous Hypno-Ray. Thank goodness the Shroud has access to his necessarily hyphenated Magna-rang: 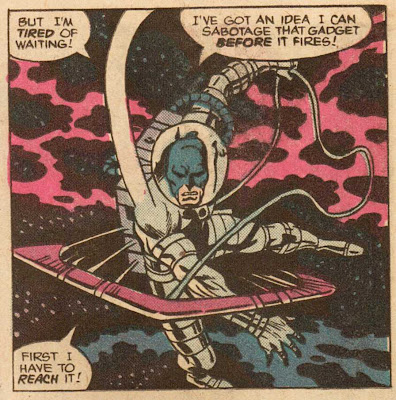 As the Shroud mounts the Hypno-Ray it begins to really rev up and powerfully prepares to pull the trigger, leaving the poor Shroud calling out into the cold for Doom.

Doom, on the other hand, is too busy battling to hear the far away cry. The Skull sees that in the course of their conflict Doom’s armor has been damaged, leaving the metal monarch hapless, helpless, and hopeless. But this is Doom we’re talking about, though, and this guy won’t go down easily: 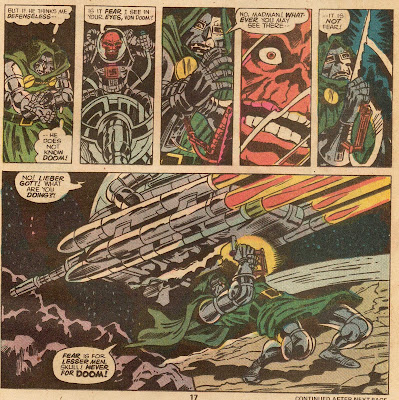 The sinister Skull underestimates the Swiss Army Knife-like resilience of the Doom-armor and falls victim to the Doom-Saw! Yes, the Doom-Saw – it slices, it dices, it juliennes, it cuts through the underside of any Rocket-Sled.

Decidedly dismounted, the Skull falls to the surface where he faces a new formidable foe: 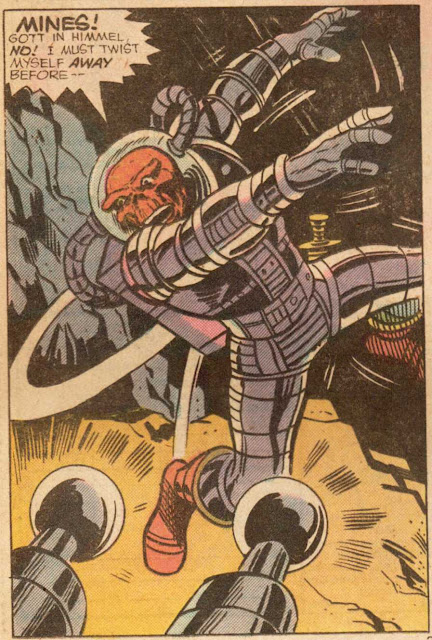 Many major mines! No acrobatic alterations can save him from an impending implosion! The mushrooming mines “shatter the Skull’s reserve oxygen tanks and cause hairline fissures to form in his helmet!” In response, Doom laughs.

The book then cuts to Captain America picking up an unconscious Shroud using a tractor-beam (as it was the nearest hyphenated device). The Shroud took the entire blast from the Hypno-Ray Device point-blank, causing Captain America to declare vengeance.

The Red Skull has other problems, though. Doom reminds him that a mere tap of his armored hand will suddenly shatter the Skull’s space helmet and deprive him entirely of oxygen. The Red Skull, like Doom (hence, I guess, the team-up) doesn’t defeat easily. He pulls out another hyphenated weapon, the Ionic-Knife, and cuts a hole in Doom’s armor. Doom has more hyphens up his sleeve, though, and activates the Freeze-Unit in his glove, sealing up the hole. Doom and the Skull struggle with the hyphens at their disposal, and eventually a cliff face comes crashing down on the spiteful Skull. Doom disarms him with a perfect punt: 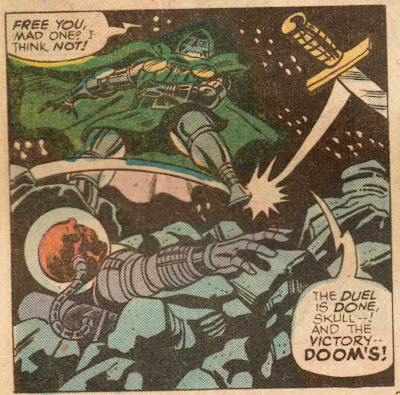 Doom then leaves the Skull buried beneath boulders and rockets off towards home.

Somehow, though, I don’t think this will be the last time we see the Red Skull…..

Man, I miss comics like this. For all the hyphens, hyperbole, and alliteration, this comic was a load of fun to read and write about. It was full of action, great characters, and enough weirdness to grab me and keep me. Overall, I would have to say this comic was absolutely amazingly awesome. Was it worth my two-bits? Oh yea.