In these economic times, finding inexpensive entertainment is difficult. Thank goodness for my local comic shop and a slew of comics nobody cares about anymore! Each week I randomly grab a comic from the bargain bin (for 50 cents) to see what kind of bang I can get for my two-bits. These are those tales. (This post is also available on Pop Culture Zoo) 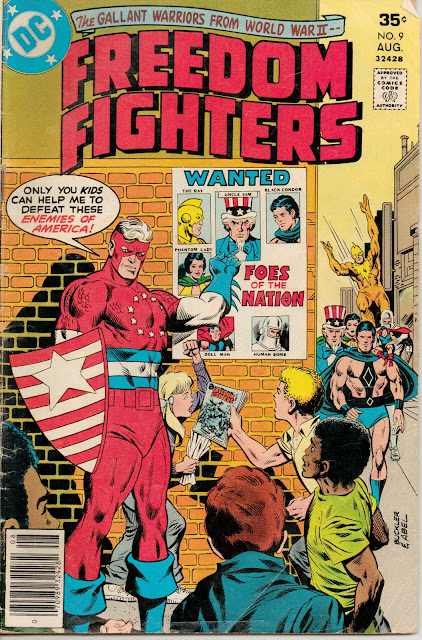 OUR BUDDIES CAN HANDLE A FOUR-ON-FOUR SITUATION!
So it’s the summer of 1977. We’ve all got “Star Wars” Fever and I wish I was cool like Greedo. Jimmy Carter is telling us about an energy crisis and gas prices soar to sixty-five cents a gallon. We are soothed by Barry Manilow telling us that it “Looks Like We Made It”, comforted by the knowledge that David Berkowitz, the Son of Sam, is finally behind bars, and really not all that surprised that Elvis has died on the crapper. Into this dense miasma of culture, DC Comics publishes Freedom Fighters #9 and everything is right in the world again.

I don’t know why, really, but I absolutely LOVE this comic. It’s hokey, full of holes, and veers off into all kinds of weirdness and inappropriate moments, but it is the kind of comic that encapsulates all the things that drew me to reading comics in the first place.

But first, some back story. The Freedom Fighters consists of (in this incarnation) Uncle Sam (who embodies the “Spirit of America” – more on this later), Doll Man, Phantom Lady, The Ray, Black Condor, and The Human Bomb. These characters were originally part of the Golden Age powerhouse publisher, Quality Comics, but Quality Comics folded in 1956, and DC bought up the licenses to many of their characters. There is this whole Earth-X, “Crisis on Infinite Earth” brouhaha that DC went through to try an incorporate these characters into their main continuity, but that is a discussion best left in the hands of a better fanboy than I, and really has little to do with enjoying this book, this fabulous book.

The story of Freedom Fighters #9, “Blitzkrieg at Buffalo!”, has a lot of layers to it. There is this villain, The Americammando, who in reality is another villain named The Silver Ghost, who has, with the help of The Crusaders (Rusty, Barracuda, Fireball, and Sparky), defeated the Freedom Fighters. The Americammando has tied the unconscious bodies of the Freedom Fighters to the main power source at Niagra Falls (blacking out “much of the Eastern U.S.” apparently??) and is going to fry them by turning the power back on. While mind-numbingly ridiculous, this is a great way to start a story and I was instantly hooked.

Anyway, there is also this reporter, Martha Roberts, who seems to know that The Americammando is really The Silver Ghost and is trying to convince The Crusaders that they are being used. The Americammando tells Barracuda that Ms. Roberts is just a “Bleeding Heart Reporter” and should not be believed. And then we get this: 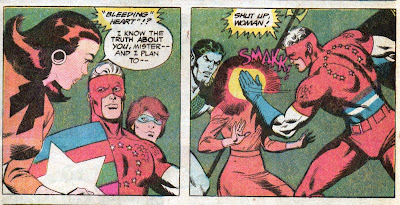 WHOO-HOOO – how about that! You don’t get to see a “SMAKK!” like that much anymore, do you? And while this is certainly easy character development, you really do have to hate this Americammando dude. Even Barracuda is disgusted by this and strikes the Americammando. They duke it out for four panels and then we get this: 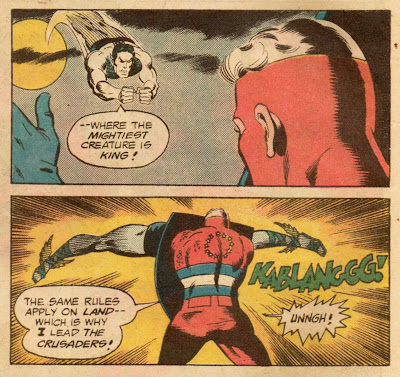 SWEEEEET! Now that’s a “KABLANGGG!” I can really get behind. I just love this image and hats off to the art team of Ayers and Abel for drawing me in (pun intended) even more.

The story continues with The Ray absorbing the electricity, saving his fellow teammates from being “Electrifried” (his words, not mine), long enough for Uncle Sam to pull the massive plug from the outlet (seriously) while shouting his apparent catch phrase, “THUNDERATION!” I love it!

The Americammando then finds the Freedom Fighters have escaped and takes the reporter hostage. While he flies her off to Manhattan, The Crusaders and The Freedom Fighters engage. After The Ray takes them down with an initial“BZZZZZZAPPPPP!”, Doll Man finds out that The Americammando has kidnapped the reporter and wants to go after them. Then we get this:

Ummmm, I will try and be mature here and not draw attention to the obviously puerile connotations of his statement. I will be the bigger man… ummmm …. hehehehehe.

So, the “four-on-four” continues and we get to see Uncle Sam in action against The Barracuda: 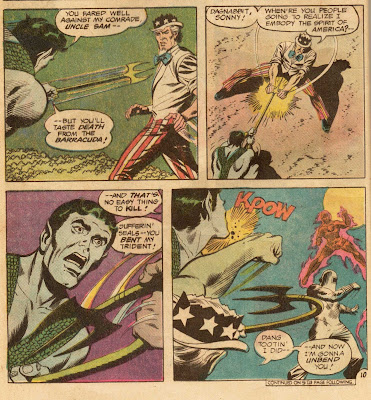 This is great stuff! From the grabbing of the trident to the “I’m gonna unbend you!”, how can you not love it? I am a little confused by this emboding the “Spirit of America” business, but I suspended enough belief at this point to make it moot, really.

The fight between the Freedom Fighters and The Crusaders lasts another couple of pages, and it gets better and better. Take a look at this sequence:

“KERBLAMMM” indeed. The Human Bomb’s power is that he causes explosions by touching things, and here he is punching this guy in the face. “KERBLAMMM”!

Even the Phantom Lady gets into the action: 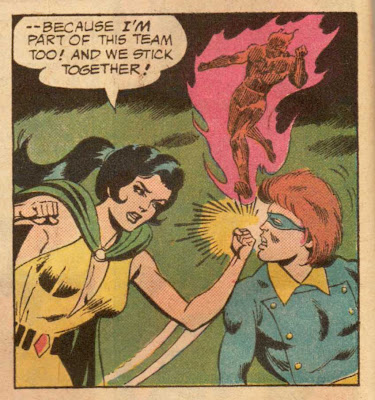 Man, that Phantom Lady packs one hell of a …. What the hell? Really? They make her hit like a girl? Not even a sound effect? Shouldn’t we get some sort of “PHANTOM PUNCH!” or something? The creators of this comic seem to have some misogyny issues that I hope they have worked out in the ensuing thirty four years since they published this. The only two women in this comic have not been the most ideal of role-models so far.

Anyway, the Freedom Fighters defeat The Crusaders, of course, and then we get this little back story about the Crusaders origins:

That’s right, these are fanboys turned heros at a comic con by some kinda transformation ray thingy that IS NEVER EXPLAINED OR BROUGHT UP AGAIN. But come on, this is a fanboy uber-orgasam! And I love the look on the faces of the guys next to Fireball – I am laughing just typing this. On a side note, these four fanboys, Marvin, Lennie, Arch, and Roy are actually based on the real life comic creators Marv Wolfman, Len Wein, Archie Goodwin, and Roy Thomas. These little inside jokes were great marketing tools that really brought fans into the “club” as it were. Nobody did it better that Stan Lee and Marvel Comics at this time, but this little moment is great.

But back to the story. Finally, The Ray and Doll Man catch up with The Americommando and his hostage. During the ensuing conflict, The Americaommando sends Doll Man plummeting to the ground to his certain death. It is at this moment that Doll Man gets to show off another power other than his all-intimidating ability to make himself very small: 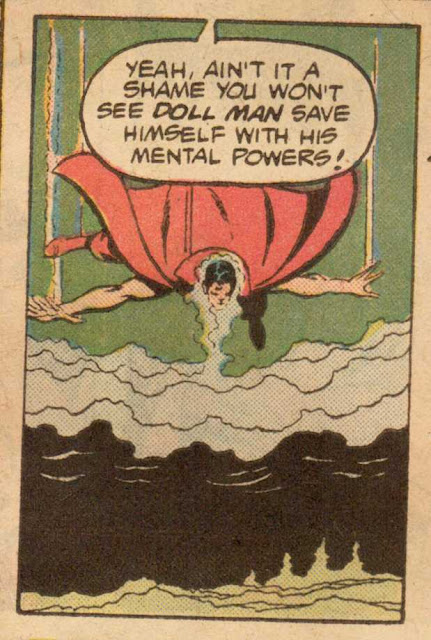 Apparently Doll Man has “Mental Powers” as well. This dude is awesome! I love the art in this panel, too. I have no idea what is happening here and without the exposition my mind would bend completely.

The story ends with Doll Man choosing to stay with his reporter girlfriend rather than help The Ray go after The Americammando (who they now know is The Silver Ghost), which pisses of The Ray but seems to please Martha quite a bit.

After a full page ad for the “Amazing Air Breathing Crazy Crabs” (Guaranteed LIVE Delivery for only $2.98 plus fifty-two cents postage each), suddenly we find Doll Man at the office of N.Y.C. District Attorney, David Pearson. There’s a gunshot, Pearson yells “YARRGH!” and the cops bust in, point at Doll Man, and say “OMIGOD! He’s just MURDERED Mr. Pearson!” The fact that Doll Man is standing over Pearson’s body holding a smoking pistol doesn’t really help his case much.

Like I said earlier, I love this comic. The fight scenes, the cheesy dialogue, the cliffhanger ending, the unresolved everything, the unexplained unexplainable, the fanboy shout-out – what’s not to love? This is a comic the way I remember comics back when I was a boy. This sort of story line, action, possibilities – this is what drew me in and I have enough of that boy buried deep in my scruff to still enjoy the hell out of it.

And for fifty cents? That’s less than a gallon of gas in 1977. I would guess that it is also a lot less than the cost of a four-on-four situation.


Hail the Freedom Fighters! Hail Rozakis! Hail Ayers and Abel! Hail DC comics for this!
P.S. DC is currently running a reboot of The Freedom Fighters with the same gang, but with a whole new gestalt. Comic great Jimmy Palmiotti is writing it, and it has gotten some attention. Sadly to say, the most attention it seems to be getting right now is its imminent cancellation. I guess it ain’t 1977 no more. Just go buy a gallon of gas and you’ll see how far we’ve come.