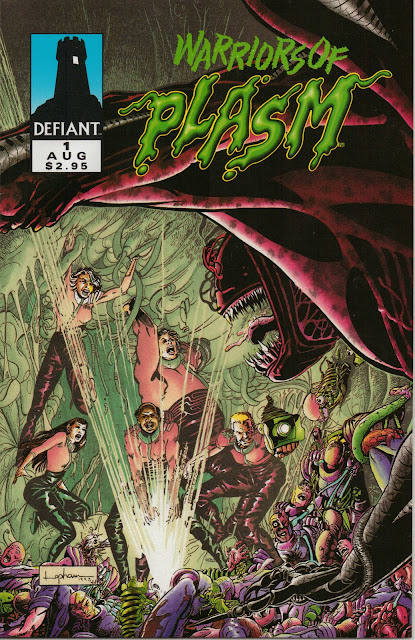 He Must Have Sensed My Nodes Tweaking!
It’s August, 1993 and the radio airwaves are filled with “Runaway Train” by Soul Asylum and breaking news that Michael Jackson has been accused of child molestation. We’re at the movie theaters to see the ultimately misleadingly titled Jason Goes To Hell: The Final Friday. At the comic shop, Defiant Comics has launched its flagship title, Warriors of Plasm to great fanfare.

Warriors of Plasm was some sort of bio-morphic sci-fi superhero alien attack social commentary sex-filled anger splatter from the mind of former Marvel Comics Editor-in-chief Jim Shooter. Defiant Comics was his new baby, after having been shit-caned by Marvel and being forced out of Valiant Comics. Needless to say, Shooter had a Conan-sized battle-axe to grind with the comic book industry by 1993, and his ego was as large as his stature. Say what you will about Jim Shooter, but he is certainly not one to back away from a fight. But this is neither here nor there. Needless to say, Shooter’s Defiant Comics lasted two years before it folded. Its premiere title, Warriors of Plasm, ran for thirteen issues and issue number one is now in the two-bit bin. 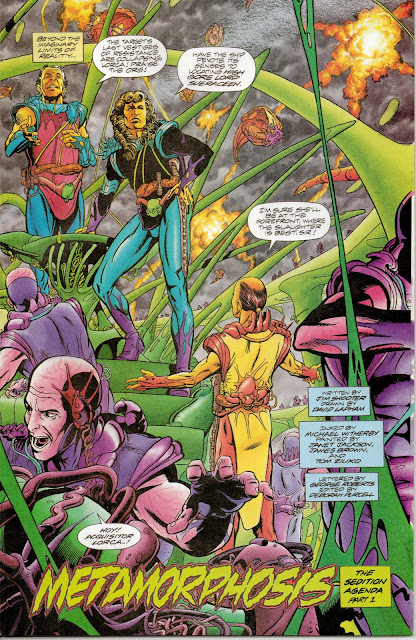 The comic opens with a densely packed splash page introducing Acquisitor Lorca, who’s the main character of this book. Lorca is leading an attack on somebody and with the help of High Gore Lord Sueraceen and her Trample-Zoms (I ain’t making this up, promise) has finally secured victory. Apparently these people conquer worlds in order to incorporate its bio-mass into their own ecosystem as part of some sort of diabolical recycling program, a la Galctus. High Gore Lord Sueraceen, also known as Sue(?), relishes her job, as you can see from these panels: 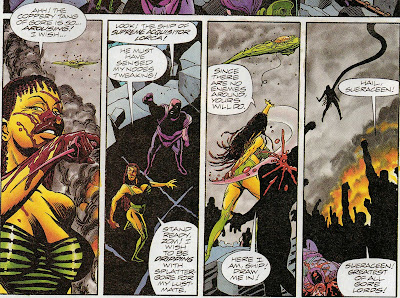 Talk about job satisfaction. But I digress.

Lorca takes the harvested biomass back for processing to “The Org of Plasm” where they all seem to live. Everything at the Org is made from biomass: the ships, the buildings, the streets, even the people. The people of the Org are a gluttonous, slovenly lot who spend most of their time “lolling in the Plasbaths” and need “an occasional event to stimulate chatter and provide diversion.” Shooter and Lapham are scathing in their indictment of the people of Org whom they portray as vain and obsessed with fashion to the point where they alter their bodies to try to ride the latest fad. An armless man tells the reader that “Arms are out of fashion” while apparently the surgical implanting of a horn on your head is “in this cycle”. They also worship Lorca, as not only does he provide an “event”, he also provides the biomass necessary for their continued existence.

This is great stuff.

Unfortunately, this is about the high point of the comic. The rest of the book kind of falls apart from here on out. Lorca is not whom he seems. He is actually plotting the overthrow of the Org government to avenge the death of his love, Laygen. Using DNA from Laygen’s hair, though, the Zom-Mother is able to recreate a perfect clone of Laygen for Lorca, complete with all of her memories and personality. This is not enough for Lorca, because, as he says to this absolutely complete copy of Laygen, she “is not real … Laygen lived once and never again.” Earlier in the book, it was established that all life comes from the recycled biomass. The clone of Laygen came from the recycled biomass. Lorca is kind of splitting hairs here (see what I did there).

Anyway, Lorca’s plan to overthrow “the vile rulers” of Org is to harvest ten thousand humans from Earth and genetically reengineer them to become super warriors. Why Earth? Apparently, according to Lorca, “it’s a world of bold, willful, self-reliant people.” Like Charlie Sheen, for example. Lorca grabs ten thousand earthlings and steeps them in the “Morph-Fluid” where the “Splicers” will remake their bodies to “fulfill the potentialities of their minds and spirits”. Why ten thousand? Because it is over nine thousand, obviously.

Of course the plan goes awry and 9,995 humans die in the goo. Five humans survive. Cookie Wazenegger from Saddle River, Rick Tietz from Hoboken, grandma Louise Johnson, Reverend Martin Gilbert, and Lieutenant Elvis P. Mazerov from the U.S. Army Reserves. This issue does nothing to explain why these five survived; my guess is it was because they were the easiest clichés to characterize. The Morph-Fluid not only clothes them, but also gives them superpowers. Cookie becomes some sort of psychic or something, Rick is a one-armed super strong guy, Louise is also strong and maybe invulnerable too, Martin can control light, and Elvis gets “real fast”. These five, I assume, become the title characters, the Warriors of Plasm.

There’s a chase/battle through the Org. There’s some sort of absolutely ridiculous looking “Prototype”:

that the Reverend destroys with light. The five begin to understand their new found powers, and then escape back to Earth (maybe?).

There’s a sub-plot between Lorca and the Grand Inquisitor Ulnareah. Ulnareah is the one responsible for Laygen’s death and he really seems to have it in for Lorca. Shooter does a bit of quick characterization by giving Ulnareah a slug tail, and by having him engage in a very uncomfortable pedo-moment: 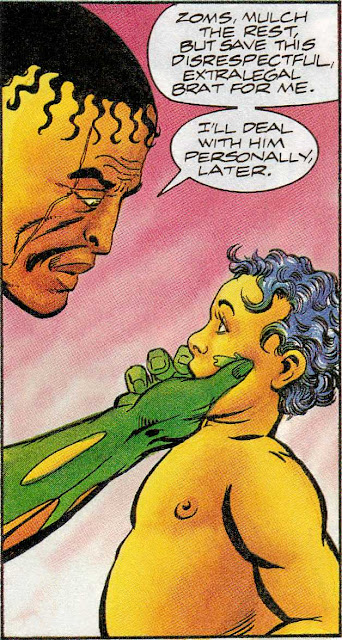 Obviously, we are not supposed to like this guy. You would think that anyone in conflict with Ulnareah would be someone we would root for (the whole enemy of my enemy bit) but Lorca isn’t likeable either, so we end up in this whole gray area. I guess we are supposed to be rooting for The Warriors of Plasm, but these five, at least in this issue, are either whiny or bossy or pathetic. All in all, it really makes for an unsatisfying read, and by the end of it I had no interest in reading the next issue.

I’ll give Shooter and Lapham some props, though. As I was reading it, I was reminded slightly of Grant Morrison’s far superior The Filth which was released nearly a decade later. So that was a nice thing, it made me go re-read that after having not looked at it for awhile. There is a moment where Ulnareah first appears and Laygen says, “Someone’s calling on the Eye-Phone.” That was a little disturbing considering this came out in 1993. Maybe Steve Jobs is really a High Gore Lord… There’s a moment when Sueraceen says, “He stroked the hair-trigger on his own lust-mate!” which made me laugh, albeit uncomfortably. And when Elvis says, “He who hesitates gets his lamps pounded shut!” I knew my son and I had a new motto for the next couple of weeks.

Still, the best part of the whole comic is at the very end. The last two pages consist of a letter from Jim Shooter to his readers and it is the most pedantic, rambling, angry screed I have come across in some time.

The purpose of the editorial piece is to thank readers for supporting his new comic book venture, Defiant Comics. What it ends up being is a conspiracy laden spew about how he got forced out of Valiant Comics by an act of "white-collar piracy" and how others "were fired because they were friends of mine whose loyalty could not be purchased."

This is followed by one and a half pages of him thanking all sorts of people for standing by him after his last company "forced him out" once it became successful, and for helping him start Defiant Comics. He ends it by saying, "This universe is the real thing, the keeper. Watch!” Remember that I found this in the two-bit bin. I think that fact speaks for itself.

Shooter has gone on to do other stuff and David Lapham has certainly redeemed himself if for no other reason he produced Stray Bullets, which I could never recommend enough. Warriors of Plasm, like much of the 90’s, is probably best forgotten or left as a little treasure in the two-bit bin.

Remember, “He who hesitates gets his lamps pounded shut!” Amen to that, brother