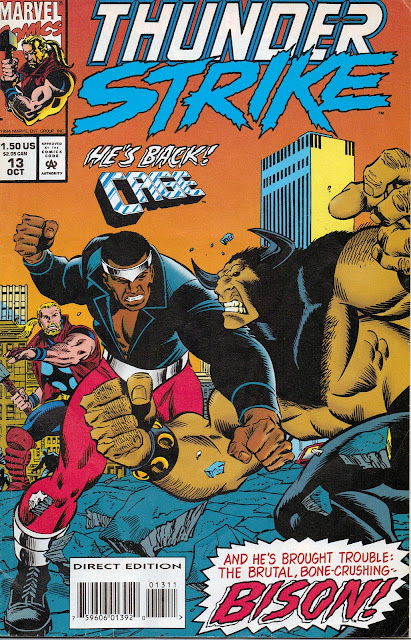 HOO-BOY!
Other than the announced cancelation of The New Mickey Mouse Club after its triumphant five year run, October 1994 had a lot going for it. This was when both Pulp Fiction and Clerks were released, and the radio had Kurt Cobain telling us “About A Girl” and REM asking us “What’s The Frequency, Kenneth?” This was also when Thunderstrike #13 hit the shelves.

In the spirit of full disclosure, in October 1994 I wasn’t reading Marvel Comics. To be honest, I have only heard of Thunderstrike peripherally, usually as the butt of a joke. Needless to say, jumping into this series at issue #13 with little to no prior knowledge added a layer of confusion to an already confusing comic, and this confusion certainly helped to paint my initial reading experience with a further thin coat of gray. In the interest of journalistic objectivity, though, I did some research and then gave the book a re-read. What follows is the best I could do under the circumstances.

According to The Marvel Comics Encyclopedia: A Complete Guide to the Characters of the Marvel Universe (DK Publishing, 2006):

Eric Masterson was an architect who was working at a building site where Thor, under a secret identity, was also employed. Thor was attacked by the Mongoose, and during the battle Eric was injured by falling girders. He was left with a permanent limp. After becoming friends with Thor, Eric was wounded again, this time mortally, and Odin merged him with the thunder god to save his life. Thereafter, Masterson would assume the form of Thor whenever the hero was needed on Earth. When Thor seemingly slew his brother Loki and was banished from this plane of reality, Eric took his place as Thor II. Eventually the real Thor returned, and Eric was given his own enchanted mace and became Thunderstrike. Thunderstrike eventually sacrificed himself to save Thor.

Got that? Confused? Yeah, I know. But it was the 90’s, I guess. You can see why I may have stopped reading Marvel Comics during this decade….. 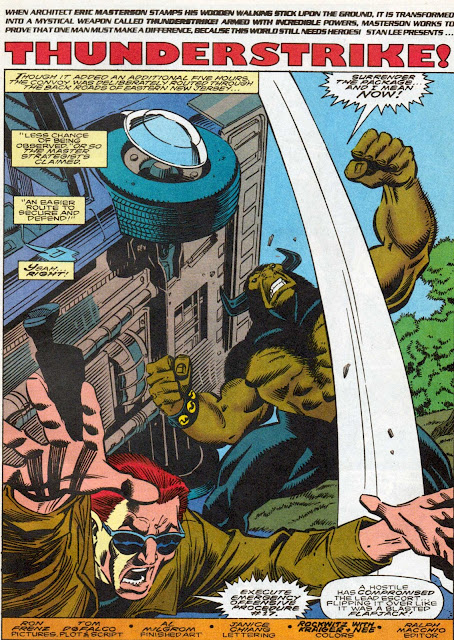 Thunderstrike #13 opens with a splash page that, while impressive in terms of perspective and layout, is incredibly static. The Minotaur looking dude, who apparently is Bison, looks like a poseable action figure or a bull-headed contestant in the Mr. Universe contestant (or maybe like a former Republican Governor from the great state of California – with horns!). That big white swath is, I assume, supposed to give the illusion of motion, but all it does is look like part of the St. Louis Gateway Arch.

So the Bison is attacking some sort of SHIELD convoy, looking for “The Package” (although from his stance on the page above, it appears he already has a sizable one), and apologizes to everyone as he tosses them about. Of course, this will not stand…. 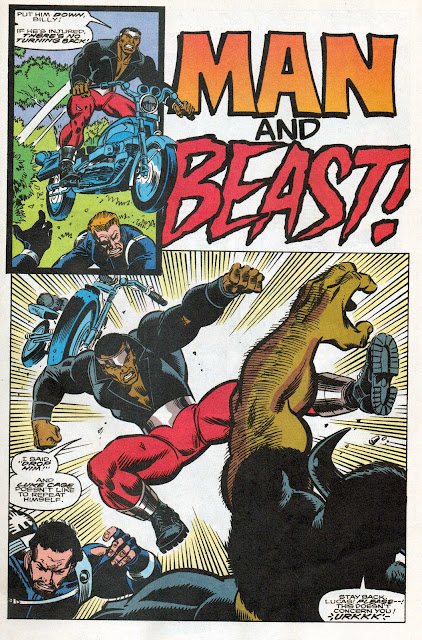 Enter, one Lucas Cage, Power Man! Cage seemingly appears from behind a nearby bush, riding what seems to be a flying motorcycle. And he’s wearing tight red pants. Can someone give me some back story on that? Why is Luke Cage wearing tight red pants? Was this a fashion in the early 90’s that I missed? I thought it was all ripped jeans and flannels. Tight red pants? I also have to point out that the flying kick that Cage is delivering looks rather uncomfortable, but it does, I think, reveal the location of the package Bison was seeking???

A fight ensues between Power Man and Bison for six panels, ending with Bison fleeing. It is followed by five panels of a rather confusing bit between Cage and SHIELD Special Agent DePaul, in which Cage threatens to use the power of the press to get out of being held in custody? Cage drives off with some sort of device attached to his shoulder.

Then BOOM, we’re in Manhattan at the “loft which is shared by Eric Masterson and Samantha Joyce.” These two apparently needed a third roommate to “share expenses” and are welcoming Leah Princess, who, according to Eric Masterson, is really “Stellaris, a super-powered warrior from out space who specializes in slaying Celestials.” Eric reveals that Stellaris and Thunderstrike have some sort of adversarial connection, so her moving in brings up the likelihood of all sorts of “Three’s Company” hijinxs. Ha! Ha! Ha!

By the way, check out the mullet on our hero. 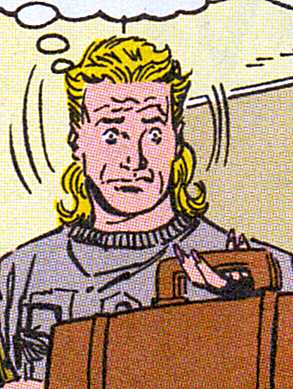 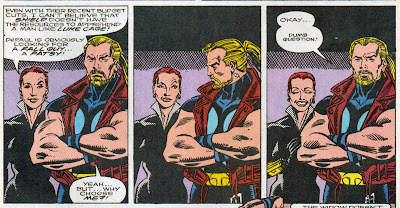 At least Thunderstrike is a self-deprecating hero. I love the look on Black Widow’s face in this scene. Not sure about Thunderstrike’s choice of earrings, though.

Quick cut to Erik Materson’s son, Kevin, expressing dismay over the prospect of moving to Los Angeles and away from his father. Quick cut to Doctor Paretsky taking Susan out on a dinner date (I have no prior knowledge, so no idea who these people are). Quick cut to a guy on the phone talking to his “Master” about “Inferno 42” which is “the most destructive element of all time!”, which is apparently the “package” Bison was looking for.

Quick cut to a woman looking at a picture of a guy in a basketball uniform. And then there is this:

I love the smell of Bison in the rain. I assume he got the green trench coat from Ben Grimm, but where the hell did he get those shoes? 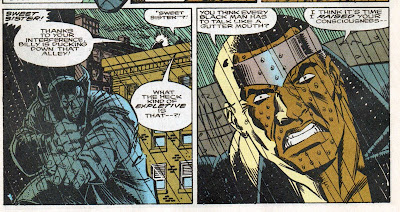 Props to the writers for Cage’s line about black men and gutter mouths, but honestly, as Thunderstrike notices, “What the heck kind of expletive is that..?” The look on Cage’s face is priceless, though, especially with the pin-point pupils and the way the rain is depicted on his face. If it wasn’t for the tiara, this would be one seriously scary dude. A dude about to “raise” some “consciousness!” But raising consciousness, in this case, is not enough for Cage: 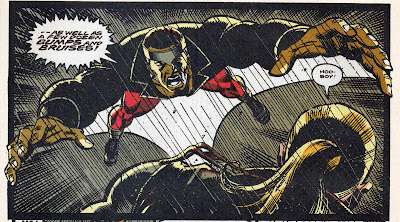 “Hoo-Boy” is right. This is some crazy stuff. Look at Cage’s hands! They’re almost twice the size of Thunderstrike’s head.

In the midst of battle, Cage makes fun of Thunderstrike’s expletive, “Hoo-Boy,” and knocks him off the building. Thunderstrike, while falling, gets all proud of himself for using some Captain America training and making Cage take the brunt of the impact. Smashing into the ground is all it takes to end the four-panel battle, and Cage decides that “a conversation would be nice.”

Cage explains that Bison is actually his old buddy, Billy Kitson, who lost a basketball career due to an injury, only to vanish and come back as Bison. I think that happened to Detlef Schrempf also. The boys decide to work together to find Bison. Because Cage still “eats red meat, avoids musicals, and leaves flying to the airlines”, they taxi around New York looking for Bison. That’s right, they take taxis. A huge African-American wearing tight red pants and a tiara and a long haired body builder type wearing a leather vest and carrying a mace – I’m sure finding a taxi in Manhattan was no problem. Anyway….

They end up at a deserted barber shop which used to be the main entrance to SHIELD’s New York Headquarters, sit in the barber chairs, and are whisked down to some sort of sub-basement. DePaul (remember him) is alerted to their presence, dons some sort of metal super suit, and blasts through a wall with a “KRAKA-PWOOM!” He then calls Thunderstrike a moron and threatens to arrest them for trespassing!

The three of these guys are then suddenly SHRRAAAKOOMMed with sand, which leads us to the final page: 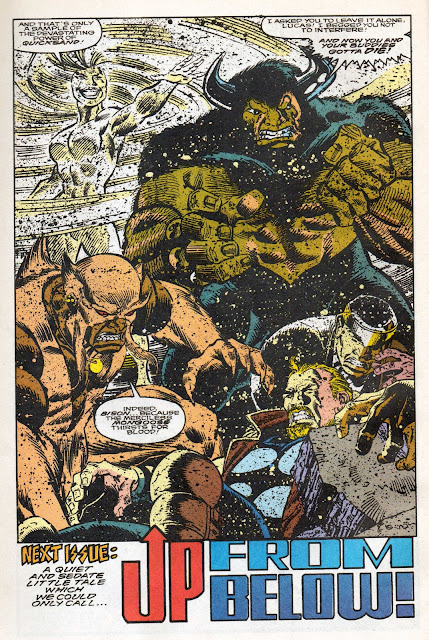 As if DePaul wasn’t enough, now they have to fight Bison, Quicksand, and The Merciless Mongoose! How’s that for a cliff hanger? Oh, and by the way, look at the size of Cage’s hand. It’s grown even BIGGER! I wonder if Bison got gloves to go with his shoes, I think Cage could borrow them.

Was Thunderstrike #13 worth the fifty cents I paid for it? I am a big fan of Luke Cage, so I guess it was nice to see him, even in red pants. I learned about Thunderstrike, although I am not sure how this will aide me in my life in any way. Reading the comic distracted me from the news from Libya and Japan for ten minutes or so, which was kinda nice. So, I don’t know – I guess that all justifies fifty cents….

Would I buy another Thunderstrike comic? Hoo-Boy.