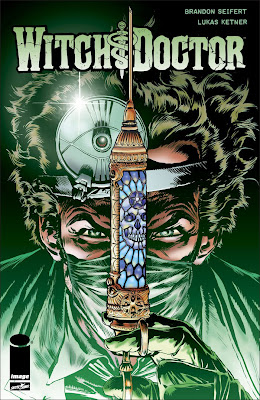 I just got back from WonderCon where I was lucky enough to be introduced to one of Image/Skybound's newest titles, Witch Doctor.  Introduced at Robert Kirkman's panel on Friday evening, this new title is written by Brandon Seifert and is illustrated by Lukas Ketner.  At WonderCon I was able to purchase a preview copy of the series, "Interview With The Tapeworm", and also grab a few moments to chat to its creators.

The caption at the beginning of the preview sums up the book pretty well:

Everything about this book clicks.  From the storytelling to the artwork, it is an immersive experience that is horrifying as anything I've ever seen and as funny as anything I've ever read.  When I met Seifert and Ketner at the Image Booth at WonderCon, the first thing I said to them was, "Nobody is having as much fun in comics as you guys." 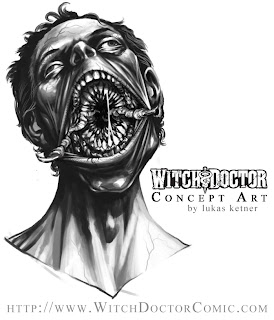 Vincent Morrow, the title character, is instantly likeable.  He has a dry sense of humor, an obvious intelligence, and seemingly no fear.  This is going to be a great character to watch develop.

Morrow has two assistants, Eric Gast, EMT-P, and "Penny Dreadful".  Seifert expertly uses these supporting characters to play off Morrow perfectly and provide a way into the madness while raising even more questions.  Gast seems to play the role of the compassionate clinician, a perfect foil for Morrow's crazed experimentations, while "Penny Dreadful" appears more insane than the Doctor and just as monstrous as the creatures under the Doctor's scrutiny.  I can't wait to find out her backstory.

Ketner's art is fantastic and perfectly suits the Gothic nature of the book.  As Seifert writes in the back of the preview:

Witch Doctor is going on my pull list, for sure.  After Seifert and Ketner signed my copy of the preview, I wished them enormous success for the book, to which Ketner replied, "I sure hope so, I've got plenty of student loans to pay off."

With the backing of Robert Kirkman and Skybound Entertainment, the book certainly has legs, but even without this, it clearly stands on its own merits.

I hereby declare Witch Doctor as my most anticipated series of 2011!


It's a sick world - LITERALLY. The universe is a living thing, and the monsters of legend are it parasites.  Earth's immune system -- humanity -- has been at war with supernature for all of history.  But to fight a disease, you don't need soldiers.  You need doctors.

Doctors like VINCENT MORROW, excommunicated from the medical community and headhunted into an exciting new career in the black arts.  Morrow serves the world with both hands -- one in magic, one in medicine -- as earth's protector.  Earth's WITCH DOCTOR.