“Uncomfortable in a Good Way”: Rob Kirby reviews OFF SEASON by James Sturm 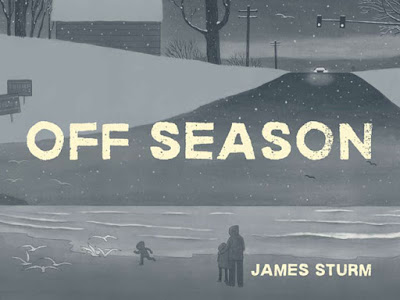 In Off Season, James Sturm examines — and lays bare — the charged emotions of a working-class man named Mark, recently separated from his wife, Lisa. Mark’s already intense personal circumstances unfold against the backdrop of the rancorous 2016 presidential elections, and he absorbs the warped political culture around him, which seems to only magnify all the wrongness in his life.

This is an emotionally harrowing tale, rendered in artfully composed cameo-like panels, awash in moody greys. Oh, and all the characters are cast as dogs—providing an important distance to the narrative. The result? Sturm captures our fraught sociopolitical moment so acutely it can be downright uncomfortable to read (but, you know, in a good way).

Off Season begins in the final weeks leading up to the 2016 election. Mark is an independent housing contractor and his estranged wife, Lisa, is an educator. They have two children, Suzie and Jeremy. Mark has recently moved into his own apartment and sees the kids on weekends; the couple is teetering on the brink of divorce while Mark teeters on the brink of financial disaster. The stage is set.

As is the tenor of the day, Mark and Lisa’s feelings reflect the omnipresent political drama playing out around them: conservative vs. liberal, red vs. blue, Trump vs. Hillary, male vs. female. Mark, once an enthusiastic Bernie Sanders supporter (along with Lisa, who now favors Hillary Clinton), feels deflated: “Unlike Lisa, it’s hard for me to get enthusiastic about any of it anymore. Yeah, Trump is a walking sack of bullshit but Hillary is just more of the same old crap (…) Not that I’d vote for Trump but at least he’s his own man.”

When tween-aged daughter Suzie presses him on who he is voting for, Mark is first ambiguous, then contradicts himself:

Mark: There are other people running. Maybe I’m what is called an “undecided voter.”

Suzie: You have to pick someone.

Mark: I did pick someone.

In the following weeks and months, Mark’s simmering anger becomes more apparent and Sturm skillfully exposes the underlying tension in scenes of everyday life, using narrative captions in ironic juxtaposition to the action in the panels. In a vignette called “The Hungry Giant,” for example, Mark indulges in a familiar game of horseplay with his kids during a weekend visit, playing a scary giant who awakens hungry and chases after them, to their terrified delight. In the game, the giant must be placated and put back to sleep . . . but then he wakes up and the game begins again. In the captions, Mark tells an alternate narrative, describing how his brother Alan, twice-divorced, has been urging Mark to “lawyer up.” But Mark believes the respect Lisa and he share will see them through the separation. Perhaps Mark is being naïve and in denial; by not listening to his brother, he risks “waking a sleeping giant.” Or perhaps not. 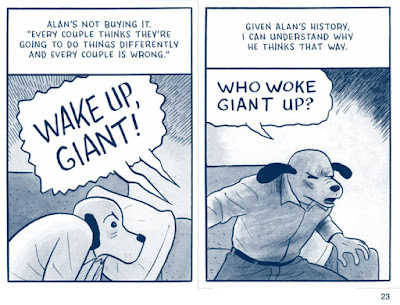 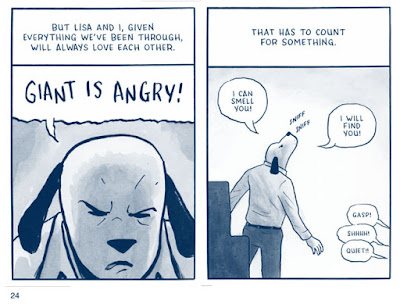 Eventually, Mark’s anger towards Lisa grows and spills over into his feelings about Clinton’s candidacy; we suspect a possible grudging allegiance to Trump, perhaps as revenge. This focus of Off Season feels particularly current. In the two-plus years since the election, many progressives (me included), have become increasingly frustrated by the seeming proliferation of media profiles of white, male Trump supporters, meant ostensibly to “promote understanding,” while minimizing or ignoring their subjects’ underlying misogyny and/or racism (don’t even get started on the fact that these white men are always the mainstream media’s default for such profiles in the first place). That said, Mark is a fascinating, well-rounded character study, practically a template for the Disaffected-Working-Class-White-Male-Voter. Through him, Sturm weaves issues of class and gender relations seamlessly into the narrative; unlike our media, Sturm refuses pat characterizations or easy answers.

It’s been said that once you truly understand someone it is much harder to dislike them. Though Mark often displays misplaced anger and irrationality, his love for his wife and children is always evident, shining through his darker impulses. We see and appreciate his struggles to remain afloat in situations where he is rendered powerless. For example, while he tries to bring integrity and professionalism to his work, he’s stuck with a smarmy project coordinator named Mick who flat-out lies to him, continually offering excuses about his ability to pay Mark adequately, while posting photos on social media of his expensive weekend getaways. Mark has our sympathies when he finally confronts Mick, albeit not in the destructive way in which he does so. Sturm illustrates this sequence with cool restraint, presenting it as a dark still-life. Somehow keeping the action off-camera adds to its impact: 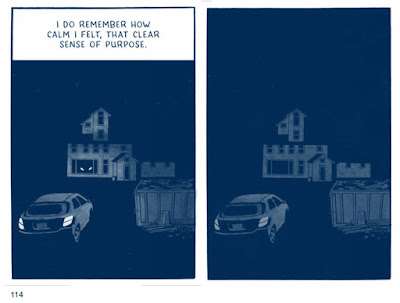 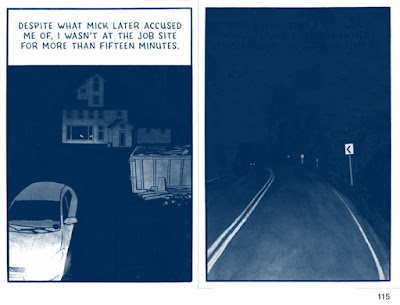 Sturm provides generous background to Mark and Lisa’s history, which includes Lisa’s history with major depression and her one-time affair. Like Mark, she is presented as a decent but complicated person. Though the story is told entirely from Mark’s perspective, Sturm’s significant skills with character and nuance flesh out Lisa and the rest of the characters considerably.

Off Season ends after the election, in December, when Mark and Lisa decide to convey a united, harmonious front in order to spend Christmas with Mark’s family. When Mark’s father receives a MAGA hat as a gift, it’s a particularly awful moment for Lisa, but Mark’s empathy leaps to the fore, and he later discretely hides the cap away to avoid further upsetting her (and tellingly, not upsetting anyone else either—Mark’s political leanings remain opaque). We’re left thinking perhaps there’s a little hope for these two yet (whether there’s hope for the US body politic is another question altogether). An odd epilogue titled “Watching a cat cough up a hairball during Suzie’s piano lesson,” depicts exactly what it sounds like: a metaphor for getting all the bad stuff out. Sturm hints at a sound resolution to this troubled marriage, then further suggests that striving towards even a fake solidarity or understanding is better than not trying at all. In teasing out ambiguities and insisting on the humanity of his flawed but deeply human protagonist, Sturm has created both an anxious document of our political moment and one of the best graphic novels of the year. 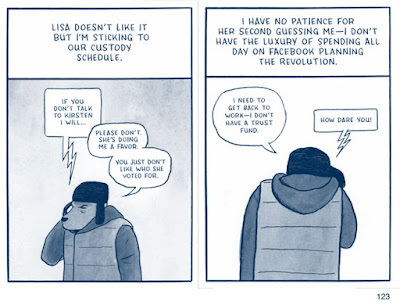 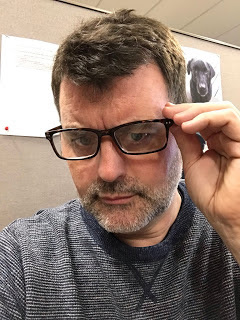