“Held together with glue:” Matt Vadnais on Scott Jason Smith’s MARBLE CAKE and the Mundane Miracle that is Urban Living 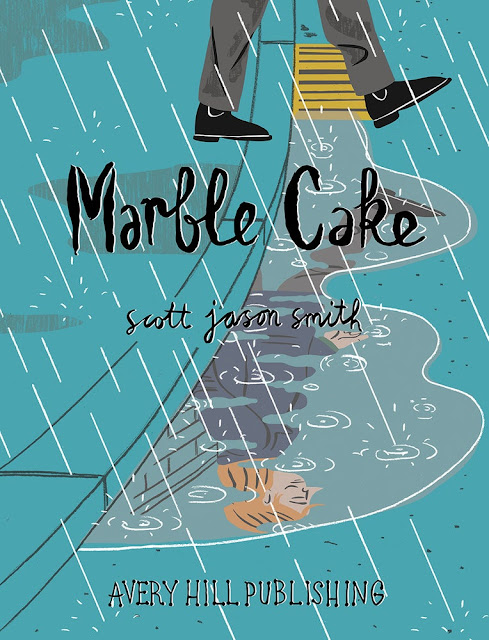 If Scott Jason Smith’s Marble Cake features a protagonist, she is Sally, a woman who opens the book with an internal monologue extolling the joy of finding refuge on the “disabled toilet.” Her solace comes in a place that is simultaneously out of view of her fellow Londoners and – as we are reminded by the initial pages that zoom in on the bathroom door and its signage – proclaims something definitive, and in this case incorrect, about the identity of all who use it. Though the book provides many, many moments of interiority, – both for Sally and for many of the people who live in London but share haunts and habits in the way one might expect from the residents of a small town – Sally never clues us in regarding the extent to which she derives comfort or pleasure from using a restroom that signals something inaccurate about who she is. Nonetheless, she is, throughout the book, preoccupied with some version of the question raised by her use of a toilet designed and marked as being for someone with different needs; again and again, she contemplates the difference between what she knows of other people and some other version of their own stories or roles in other people’s stories. Though the details of her plot matter to what Scott Jason Smith is doing in Marble Cake, they aren’t handled in a way that makes her the main character of the story; she is our protagonist largely because her thought process provides a significant clue as to how one is supposed to read the book. As she contemplates the lives and identities of people who buy various items from her at the grocery store where she works – all of whom are given scenes and internal monologues of their own – Scott Jason Smith instructs the reader to contemplate the relationship between the aspects of one’s story that are legible to others and the rich, though often mundane, interiority that is not.

Sally, a reader learns early in the book, suffers from a pronounced though ultimately not-that-bad toothache. Questions about the nature of pain – perhaps even more than questions about whether or not we all perceive the color red in the same way – provide an intro-to-philosophy gateway to contemplating the differences between one’s sense of self and one’s sense of others: is pain real? Does pain exist in the mind or in the tooth that aches, in a sensory experience of that tooth, or everywhere that one feels that pain radiating? How does one know that others are in pain, especially if others aren’t experiencing pain in ways that seem consistent with one’s own experience of pain?  To be clear, in Marble Cake Sally doesn’t ask any of these questions; still, her musing about stories that remain illegible despite her knowing what people buy – “I always wonder what goes on with the customers behind closed doors” she thinks to herself – serves as a signal that Marble Cake is a story about the secret lives of others. 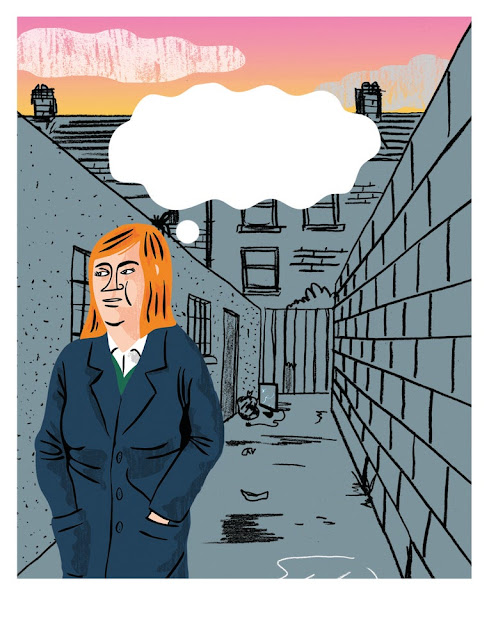 More specifically, Marble Cake is a book about the ways we misread or fail to read the pain, fears, and desires of other people. Smith doesn’t simply show us Sally thinking about the experiences of others that she does not have immediate access to; he extends this difficulty to the reader, complicating the way we understand what is happening in each of the characters’ heads. Many books that are about the difficulty of knowing others are content to let readers know the book’s characters better than the characters do; Smith goes out of his way to make his characters as hard to read for us as they are for each other. One result of this choice is that the book ends up far more experimental than the story itself would suggest. We have a conventional plot, complete with rising action, climax, and denouement. However, because of Smith’s decision to focus on multiple characters at the same time while obfuscating or truncating important scenes, Sally’s story is not nearly as central to the way Smith makes his point as one might expect.

If this were a more conventional book, it would be about Sally’s decisions and the consequences of those decisions. Sally, in other words, does things absolutely worthy of being a protagonist in a more conventional story. In order to think about the way that plot – and its relatively obscured place in Marble Cake – serves to emphasize one of the most profound things that Scott Jason Smith is doing here, it is necessary to give away the books ending (or lack of ending). Consider yourself warned that a significant spoiler is coming after this lovely example of the book’s art; if you want to stop reading this and go read the book before continuing, I understand and will only say that you should. Marble Cake is terrific. 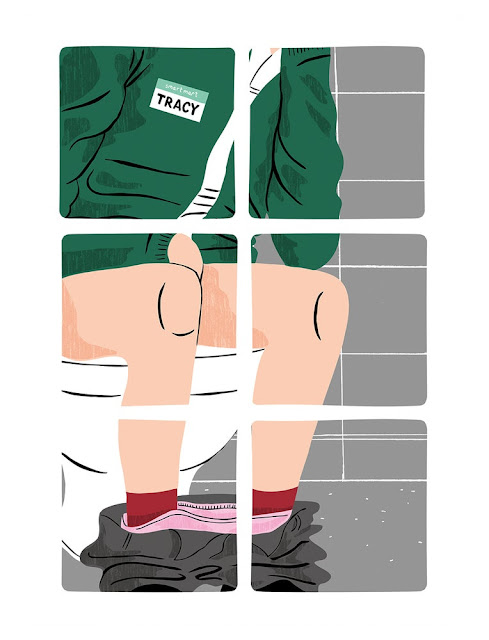 So. Spoilers. Throughout the 120 pages of Marble Cake, Sally begins, perhaps, to fall in love, though it’s worth noting that the reader is denied meaningful dialogue between her and her potential romantic partner through the brilliant use of faded and empty dialogue bubbles. Despite not getting to spend much time with her and her “not boyfriend,” the reader has access to Sally’s thoughts and the thoughts of her potential partner: they are both interested in a relationship. Despite having had multiple dates that the reader can only assume were charming and comfortable in equal measure, Sally drinks more than she intended to at a party and has a sexual encounter with a near stranger. Circumstances work out in such a way that the encounter itself could remain a secret known only to her; she contemplates the murkiness of whether or not the encounter was a kind of infidelity since she – though maybe she’s falling in love – is technically single. However, any chance she has to begin a relationship without revealing that she had sex is dashed by her realization that she is pregnant; the pregnancy is obviously going to make her situation much more complicated by making her private choice to go to bed with her friend’s cousin legible to her potential boyfriend.

If Scott Jason Smith were telling a conventional story, we would see the consequences of her actions in terms of her budding relationship; instead, the book ends with her about to tell her prospective partner the facts that he, soon, will be able to read on her body. This scene – which, again, the reader is denied – is one of the only moments in the book where someone shares a private truth to someone before it becomes an obvious part of their legible identity. Smith cuts from the scene to an image of a mother pushing a stroller, emphasizing the semiotics of motherhood. In addition to replacing Sally’s difficult conversation with imagery that explicitly suggests a potential future for her, Smith uses a similar technique to emphasize the stakes of this conversation. Throughout the book, the reader sees the impact of missing and ineffective fathers. Though the reader is given no real suggestion as to whether Sally’s child will know either a father or a potential step-father, Smith augments the stakes of this personal conversation with societal and community stakes depicted throughout the book. 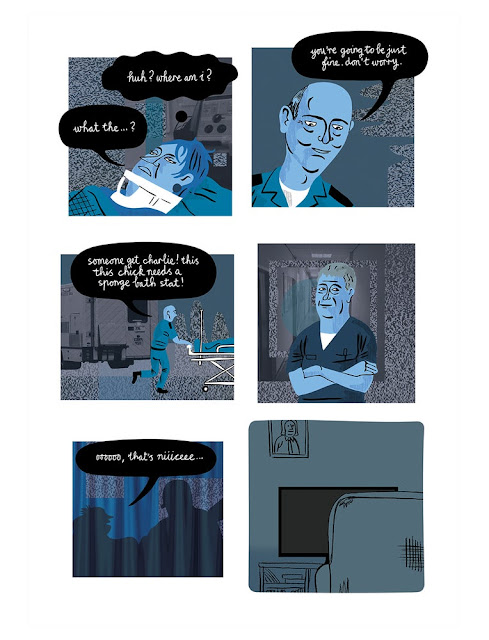 However, Smith’s decision to withhold the most important details of Sally’s plot does not feel like trickery. By this point in Marble Cake, the reader has been taught to think about the story as the swirl of lives happening in this part of London and not as the consequences of Sally’s choices. Throughout the book, characters notice a series of disappearances – one of which is explained in a sort of magical way as a girl who followed a soccer ball into a tree and ostensibly stayed there for days or weeks – and are threatened by a mysterious backpack thief who targets people in train stations and public places. Readers are trained to see the constant news reports and mentions of this man who uses some kind of blade to cut a backpack from his victim as evidence that he will play a key role in the plot. In keeping with Smith’s experimental approach to plotting, however, the backpack bandit functions primarily as a metaphorical proxy for the reader trying to figure out who these characters are by reading the artifacts of their lives. Though we do get access to many characters’ thoughts, most of those thoughts are no more revealing than the physical detritus of their lives, detritus that could, in most cases, fit into a backpack. 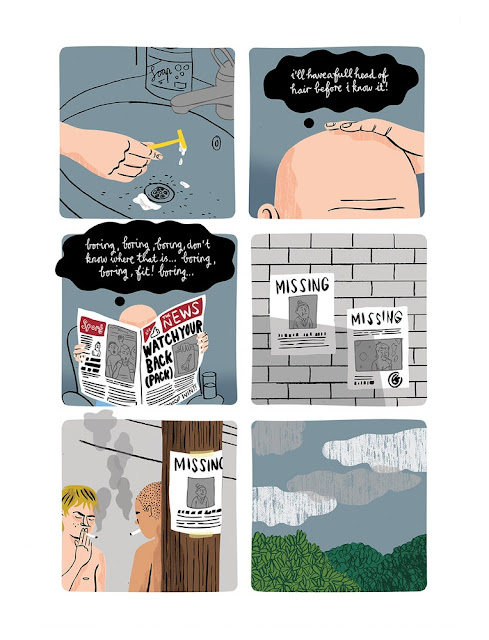 Though, in order to talk about how good this book is, I felt it necessary to spoil the plot details that stay just out of Smith’s primary focus. In light of the way that Smith contemplates the legibility of experience, however, sharing the interiority of my reaction feels unfair and prescriptive. Instead, taking a cue from Smith’s remarkable, potent, and ethereal first book, I will end on a simile, somewhat borrowed from its pages: reading Marble Cake was like watching strangers I suddenly and inexplicably care about struggle to keep their belongings dry while it rains much harder than any of us expected.