Overworked and Overstimulated: Nicholas Burman on FRIENDS IN MANY PLACES by Sander Ettema 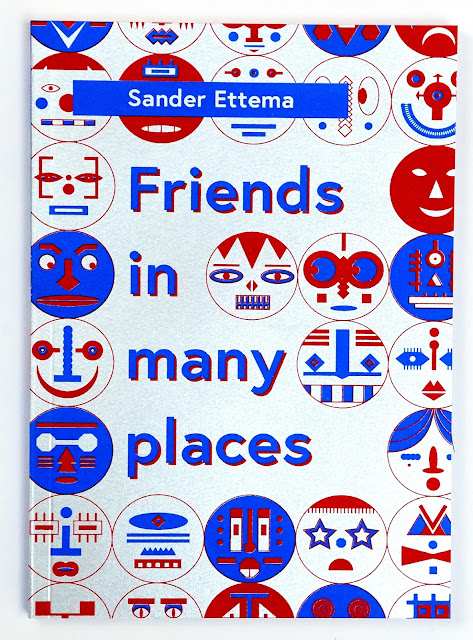 Sander Ettema’s hyperactive and disorientating debut, Friends in Many Places, is a fine example of when a printed comic is penetrated by, and made a mediator of, online culture and many of its real-life consequences. The artist submerses the reader into a world of an impossible amount of interruptions and expectations. Here, phrases such as “RISE AND SHINE” appear as if from a horror comic. Indeed, Friends feels like a millennial responding to the horror of online life, and going back through the rubble of internets yore to craft a therapeutic control mechanism for their current predicament, that of being overwhelmed by social media and surveillance capitalism.

Ettema, a Dutch artist, used the project as a way to creatively meditate on society’s demands for us to be constantly efficient and overworked. Additionally, he also wanted to alleviate the stress stemming from the fact that, as the foreword states, “the comments of peers, clients and just whatever I would read online would weigh heavily on my shoulders.” In the digital world of constant contact and self “branding”, there is a sense that people are always watching, and, in this environment, the self becomes anxious and self-conscious in equal measure. 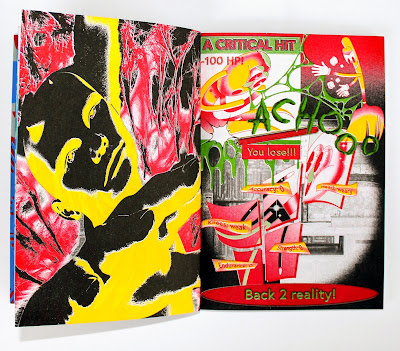 The book’s narrative is split between five acts which have their own theme, antagonists, and color palettes. The protagonist is an overworked, constantly morphing humanoid who sports a bowl haircut. Their journey takes place in a diegesis which is both part a hyperreal equivalent of the reader’s own screen-dominated epoch, and part a projection of the character’s various (sub)conscious fears and anxieties developed thanks to the same stimuli. Friends uses comics’ power of sequential association to suggest that the overlords of this world are a society of faceless, bubble-bodied mannequins, who Ettema portrays via a handful of splash pages. Their emotionless work ethic stands in stark contrast to the pained expressions of the nameless protagonist, whom Ettema depicts in hectic environments and a range of claustrophobic panels. The fifth act is dominated by a moon-faced automaton who provides the protagonist with a destabilizing cup of coffee, its malignant act of companionship results in a darkly comic and downbeat ending to the work: the protagonist’s self-combustion.

The change in colour scheme for each chapter is especially vital, and is, on first thumbing through the book, the immediate clue that this is a work of and about contrasts: the contrast between the hyper-real and the concrete; between expectations and reality; and between a state of calm pleasure and a state of over stimulation. Act I is shaded in pastel colors, giving it a sense of childhood innocence, befitting the fact that this section of the story is being told from Generation Z’s equivalent of a post-Garden of Eden Adam. Act IV’s pinks, greens, and blues, meanwhile, are much more clinical. Perhaps it is no surprise that that chapter ends with a lab rat discovering it’s stuck in an exitless maze not of its own design. 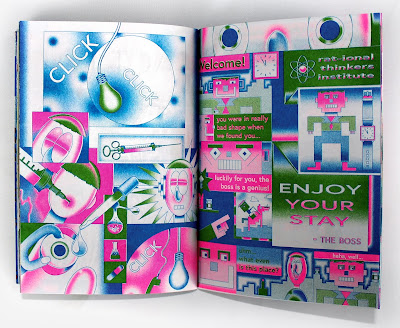 The bright, neon colors, typical of the risograph printing process, heighten the sense of hyper-awareness. In Friends, they seem to arrive via the subjectivity of the protagonist, whose googly eyes are always alert. The dreamy, sometimes translucent coloring also adds a hallucinatory edge to the work.

Ettema computer-generates nearly every inch of his work, only relying on pen and paper for when certain creatures need to look especially fluid. Rather than attempting to create an “organic” feeling with his digital drawings, figures and icons are created from the “basic” shapes available to him at a click of a mouse. Various images of textures and patterns are used as backgrounds and decontextualized to the point where they become highly ambiguous. Visual intertextual references, such as a hard-hatted Lego minifigure, are also sampled into this dayglo world. In other words, Friends in Many Places loudly presents an example of nearly every innovative function that digital illustration software has provided artists since its inception in the late 1980s. In this book, the process is the work. In our daily lives we are unable to escape the influence of technology, and neither can Friends, a comic made by an artist making a work which critiques his own tools. 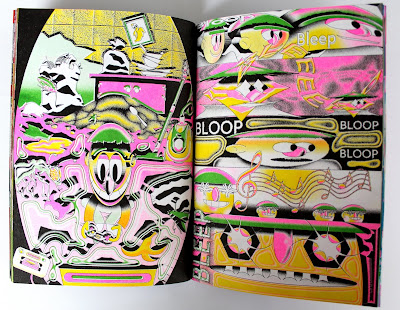 Friends wouldn’t work as a webcomic because much of the web already has the same, breathless impact. It is a success as a printed book because it transfers that environment into a space where it is tamed, made “human” again, thanks to the fact that the artist is in control of the color, the speed, and types of interactions between the various elements. And, finally, the reader is in control of turning the pages. In much the same way that the work was an attempt by the author to capture his own anxieties and stress, and making them manageable objects, the book also attempts to subdue the hectic, attention-grabbing aspects of the modern world which cause such emotions to arise.

While the story of a generally aimless individual negotiating various (economic) stumbling blocks and societal pressures is one for our times, it’s the aesthetic which does much of the talking. Ettema is inspired by the digital designs of the mid-1990s and early 2000s. Taking cues from a time before the influence of Apple’s iOS and Instagram aesthetics transformed digital environments into sterile and utilitarian spaces, he takes great pleasure in emulating the slight inaccuracies of Microsoft Paint and so-bad-they’re-good WordArt fonts. The relative simplicity of those times is exaggerated here. By being cut and pasted and warped, each element, including the protagonist, fights against the tide which pushes towards an ever-depleting space. Towards the end of the book, the spatial design of the elements on the pages seem more collage than comics; frames are dispensed with, and the reader is left to navigate a stream of consciousness, through associative rather than chronological, page designs. 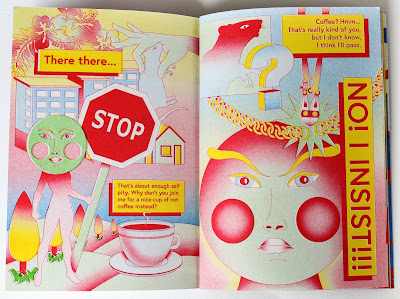 The effects of online culture and digital technology on the generations that have never known life without either are only just starting to be understood. To avoid the apocalyptic fate of Friends’ protagonist, we too must take control of the labyrinthine world of networks and digital signals that surrounds us. Probably the most telling point of the book is that there aren’t actually any friends in Friends. Rather, it suggests that we’ll just have to look elsewhere, likely away from both the screen and the page, to find them.

Friends in Many Places is printed by Jumbo Press, a risograph specialist that also produces large format prints and merchandise from its base in London, UK.