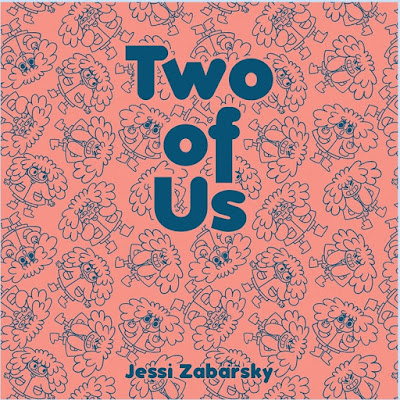 Jessi Zabarsky’s Two of Us is a deceitful comic. It’s all-ages charm masks a deeper, more emotionally entangled story of adapting to environments and mentalities outside of one’s comfort zone. On the surface, it’s a tale of a magical, ragamuffin heroine, Frebry, trying to fit into a normal school, with expectedly hilarious results. However, when taking all of the characters in Two of Us into consideration, Frebry isn’t the only character at play here who’s forced to mature in unexpected ways.

Zabarsky’s simple, direct story-telling comes with an empathetic heft that intertwines Frebry’s journey of maturity and self-discovery with a similar arc for her mother. The owner of a shop full of magical artifacts, Frebry’s mother is seemingly resplendent in wisdom and experience as she encourages Frebry to try her hand at Mundane School instead of magic school. This opening scene not only establishes the sweetly deadpan tone of Two of Us, but it also deceptively confirms the layered approach to the comic’s story. The scene depicting Frebry’s frustration at being sent to a different school may seem to focus on her, but placing her mother in the frame also positions her own mini-arc of growth in the story, as her own frustrations arise from positioning themselves within a world that’s harsher and less empathetic to them than their regular, more magical world. 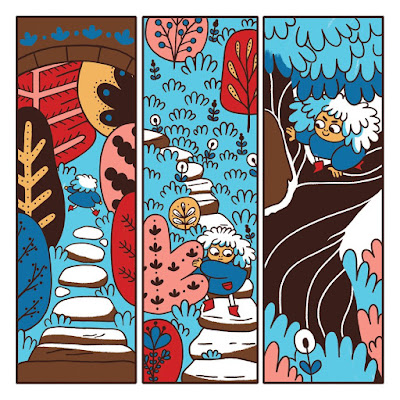 Two of Us carries a central message of maturity, of how Frebry’s experiences in both regular and magical schools allow her to gain sympathy for her single, ever-working mother by magically splitting into two versions of herself. The act of multiplying feels like a reflection of Frebry’s introspection and her getting to grips with understanding herself, bolstered by having to exist in two different worlds - magical and non-magical. It’s a handsomely crafted arc for Frebry, one that doesn’t push the boundaries of believing how self-aware a child can be.

Her maturity rests on the backbone of her relationship with her mother, who provides the platform to make Frebry grow up. The comic’s title then doesn’t refer solely to the two versions of Frebry in that context, but it could also refer to Frebry and her mother. Two of Us becomes much more emotionally well-rounded when read as a story about a daughter and her mother, rather than purely a story about Frebry. 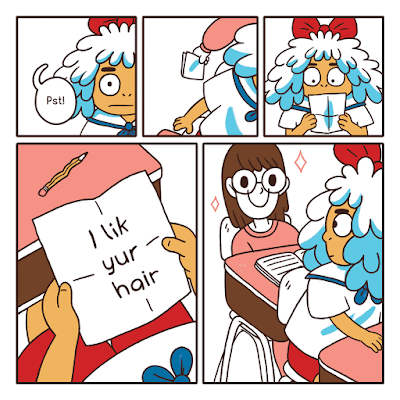 This slick trick Zabarsky pulls in the comic gives it a genuine depth. There’s something bittersweet in how innocently prepared Frebry’s mother is in sending her daughter off into the real world when she herself has far more trouble blending in than Frebry. Where Frebry clearly doesn’t adapt to the confines of the real world, she at least forms a close friendship. Her mother fails to do even that, but only through the assistance of their daughters do Frebry and her friend’s own mother break down their prejudices against each other. In such few pages, Zabarsky delivers a deceptively deep narrative in which child and adult play off against each other’s attempts at adapting to new, uncharted, frightening worlds they’re not experienced in.

Zabarsky’s art suits the vibes of the comic to perfection. She illustrates locations and architecture with only the barest detail, yet she makes those details count. She’s more invested in portraying her characters than her landscapes, focusing on Frebry and her mother by illustrating a warm, comical sense of character from the pair of them. Frebry is an absolute riot, drawn with a shock of uncontrollable, fluffy hair to reflect her boundaryless persona and gawking anime eyes that tap into that classic, gargantuan wonder a child can have with the world. At the other end of the spectrum is her mother. Zabarsky draws her with as more slender and graceful than Frebry, there’s a joint sense of weariness and optimism in her face from raising her deliriously uncontrollable daughter. It’s wonderfully illustrated, but again, with minimalism, and yet with all the right detail. There’s not a beat missed in these characters. Zabarsky also makes use of a limited color palette that never overwhelms the comic’s compact, stripped back style. 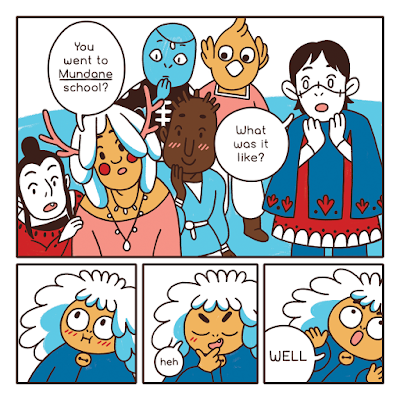 Everything about Two of Us is clear, concise, and hits home. It pinpoints its emotional targets with great subtlety, yet that subtlety is precise throughout. Zabarsky’s direct story-telling gives the comic clarity to be enjoyed by younger readers, but its layered, character-driven story can easily be appreciated by older readers who may be able to spot these tactics better than youngsters.

Beyond these analyses, however, Two of Us is a warm, jovial tale of the hardships of being both young and old. It’s a brief enough story to never lose track of this, and it’s sweetly deadpan vibe matched with the thick, blocky art lends the comic a firm tone. Two of Us stands as a comical yet gentle affirmation of how persevering in unknown situations and landscapes can increase maturity without destroying individuality. Within Zabarksy’s controlled artistic platform, Frebry’s gleeful journey is a pocket-sized joy to behold.