Miniature Jesus #1
(Ted McKeever; Image/Shadowline)
4/5 stars
Let's just get one thing straight -- if you start a comic with a Walt Whitman poem, you've got my attention. Add to this comic a musing on the nature of morality and an exploration of religion as a concept, and I'll probably ask it out on a date. Then add the fact that this book was created by Ted McKeever and I'll probably go down and one knee and propose marriage.
Miniature Jesus #1 is my new wife. 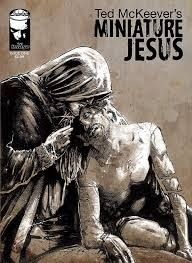 Ted McKeever makes great comics. They are smart, clever, well-executed, thought-provoking, entrancing, off-the-wall, poignant, insane, touching, masterful, and a host of other positive adjectives that, as I have lost my thesaurus, I could spew here. I understand he's also a really nice guy.
Anyway, let's talk Miniature Jesus #1. This is a book in which nothing is wasted either in art or in intent. Every panel contains a doctoral thesis of ideas, symbols, heft -- from an open mailbox in front of an abandoned motel, to Star of David crosshatching on the window of an open door, McKeever is begging you to go deep, to read with your eyes open and your brain engaged. And this is only on the first page for goodness sake.


And then McKeever has the audacity to quote the first stanza of Whitman's "As I Ponder'd in Silence" in which the poet wrestles with himself as to his own intent, a conversation with "the genius of old poets" who admonish him that there is only one theme fit for poetry
And that is the theme of War, the fortune of battles,
The making of perfect soldiers

Oh my. We're in for quite a ride here, aren't we? Then again, this is a McKeever comic and you should expect as much.
After 26 days of self-imposed exile (wait... wasn't Jesus supposed to be 26 when he was crucified), the main character, a recovering alcoholic, has a conversation with the rotting carcass of a cat about the Egyptian Goddess of Booze, and then he confronts what may be the very demon of alcohol who reminds him of this drinking past. This then leads the character to question where the "anti-demon who sits on (his) shoulder, whispering words of support and fortitude in (his) ear" has gone? The answer to this question takes up the rest of this book. Perhaps. And if the answer is what I think it is, Miniature Jesus is going to be an amazing journey.
The theme is war, after all. The making of perfect soldiers.

If issue one is any indication, though, McKeever is going to make you do a lot of the leg work to get where he wants to take you, and it won't be a casual stroll. This is a book you're going to read and re-read and then, probably, read again and, each time you do, you will find another little clue as to what you need to know. By the time you figure it all out, though, issue two will be out and that will probably take you somewhere else. This is a McKeever book, after all.
While Miniature Jesus ain't no Chocolate Jesus, it's still good enough for me.