Review -- IRON OR THE WAR AFTER 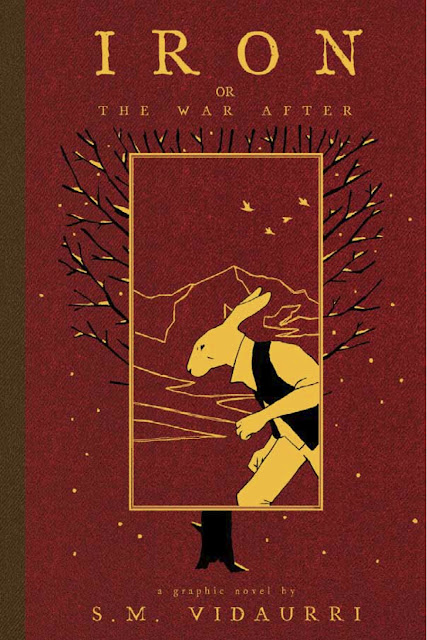 Jason Sacks: I'm writing the first part of my review of Iron on the day of the Boston Marathon bombing, one of the most horrifying days that I've lived through in a while. It's terrifying to think of all the innocent people who were caught in those two terrible bomb blasts in Copley Square, of the loss of peace of mind that everyone will remember from this day, and of the ramifications that every one of us is going to have to live with for the rest of our lives.
No matter how we try to move past that horror, the events of April 15, 2013, will always linger in our minds as one of those rare moments that cut right through all the grind and pressure of everyday life -- like the Oklahoma City bombing, the Newtown massacre and 9/11, this is a day that people will remember, people will react to, and people will always have in the back of their minds as they consider attending a wide open, major public event.
I only hope to God that the authorities find the craven murderers quickly. I hope that they show the same mercy on that killer or killers that the murderers showed to all the innocent men, women and children who were living their happy, normal lives attending the Marathon with friends and family. There's a special circle in Hell waiting for these evil terrorists.
The central scene of Iron, or the War After is another terrorist act. Today's events cast that act in a dramatically different light than that scene might have otherwise.
The world that S.M. Vidaurri creates is a world of slow glances and quietly important moments. Vidaurri's world is a place where only a few small pieces of the characters' tumultuous inner lives are on display in every scene. Much happens below the surface in Vidaurri's graphic novel. Therefore the effects of so much pain and fear, courage and cowardice, terrible memories and wrenching politics show in every character's well-shaded eyes.
A war has just concluded, but the pain of the war still lingers among those who experienced its trauma. Simmering angers and resentments simply cannot be submerged in a new word, particularly because the losing side resents the winners tremendously. There have clearly been many experiences like the Boston Marathon bombings in the world that these characters live in. The trauma of those events still lingers painfully in the minds of these anthropomorphized rabbits and geese and mountain goats.
Because the war has not really ended for these anthropomorphized characters. As Vidaurri so smartly labels it, this is the "War After." And that "War After" has consequences. A train with over 800 people onboard gets blown up in Iron, by the nominal good guys, as a bit of revenge for the evil that has happened in the war. A child is even the one who musters the courage to set up the bomb. I child is the one who prepares to blow up the train.
A child! Wars have consequences. Wars have terrible consequences.
Elkin, I've rambled a bit here in my introduction; can you help me focus my mind of the enormity of the actions that Vidaurri shows us readers?

Daniel Elkin: I think you hit it on the head when you talked about the consequences of war and violence, Sacks. As violence begets violence it begets violence anew -- an endless and ubiquitous cycle of blood . On the same day in Boston that shrapnel tore into the lower extremities of innocent bystanders watching people run (an irony thick and resonating), it was reported that a wedding in Uruzgan, Afghanistan was interrupted by bombs dropped by a US warplane -- thirty innocent people blown apart as they celebrated a union between loved ones.
Death. Blood. Horror. Terror. Innocence subsumed in explosions. As Karl Shapiro writes in his poem "Auto Wreck":

But this invites the occult mind,
Cancels our physics with a sneer,
And spatters all we knew denouement
Across the expedient and wicked stones.

And this, as you point out Sacks, is at the heart of Iron.
After my first read of this book, I felt very distanced from it, as Vidaurri just sort of drops us into the middle of a much larger story. Trying to decipher the characters from each other was difficult. They are, as you say, anthropomorphic rabbits and tigers and goats and the like. Their motivations? Enigmatic. It is only with a subsequent read that the story unfolds. You as a reader end up admiring Vidaurri's storytelling and feel honored that he trusts you so much to understand what he is attempting.
Iron is a book that demands at least a second reading, if not a third or a fourth. The rewards it offers, I think, are worth the investment.

Jason: I first read Iron in the midst of a giant a flurry of activity during the end of the Holiday season last year. In the week after Christmas, while I was off work and finally had the chance to get to my long backlog of unread books, I plowed through about a dozen graphic novels, one after the next. I liked most of the graphic novels I read, disliked others, but Iron stood out in the list.
I had trouble with Iron, but this creation lingered in my mind after a first read. I had trouble really understanding the style and pacing that the cartoonist was working to achieve. I stumbled over the subtleties of the book's characters. Their actions, their motivations and impacts of their stories simply passed me by as I read them. Because of that, I dismissed Iron as being something that I just didn't really understand and moved on to the next.
Then I had an interesting conversation at Emerald City Comicon with "Tay" Taylor, the editor Ironat Archaia. Tay was as excited about Vidaurri's book as any editor I've ever spoken to about their work. Tay called Iron her favorite book she'd ever edited, praised Vidaurri's storytelling and style. Tay requested for me to give this graphic novel another try. She told me to allow the storytelling to wash over me, to give the story in Iron a chance to play out in its own terms, more slowly and more stately rather than quickly and intensely like so many other comics. She told me to take my time, reread Iron several more times, allow Vidaurri to tell this story in his own voice.
You instinctively grasped what I needed Tay to tell me: slow down. Let the story of Iron wash over you. As you so beautifully say, Vidaurri trusts the reader to figure out for themselves what is going on in this book and why those events happen. This is a graphic novel where so much is stated in shadows and symbolism, in shifted eyes and sideways glances. But everything means something. The events and motivations in Iron are often subtle, but that subtlety gives Vidaurri's cartooning real power.
Characters change and grow as this story progresses, but the changes are small, understated and quiet. The intense inner frustration of living with war and oppression hits these characters hard. We can see that strain in subtle ways: in sideways glances and angry body language, in clipped dialogue and occasionally in angry actions as well.
It's simply impossible to pick up on that restraint on a quick first reading when you're consuming books in a great flurry. This book demands a slower read than that. Iron rewards a slow read in a way that you don't usually see with graphic novels.

Daniel: I love it when we agree completely on things, Sacks. This is not a book you read at the laundromat or over a Grand Slam at Denny's, hungover. Comics tend to have an intensity of action, a pushed pace towards the next conflict, and characters who often times have to tell you their thoughts. Iron, on the other hand, is a slow, quiet book about damaged individuals coping with power struggles, morality, obligations to family, obligations to nations, and obligations to ideals. It reveals instead of tells. In this book even scenes of horrific violence are somehow quiet.
And this tone is a result of carefully storytelling, but also in the presentation of the art. Tightly inked lines provide vessels for Vidaurri's color choices of muted grays and blues. There is a washed and blended feel to the pages in this book which complements its intent perfectly. Even the train explosion you referenced earlier, Sacks, is soft, subtle, silent. A character is brutally tortured, and there is a quietness to this as well. Folks lose their loved ones throughout this book, a consequence of their actions, their situations, their ideals, but each loss is, in its presentation, almost gentle. This juxtaposition may have been one of the things that pushed me away initially. Once again, with another read or two I understood why Vidaurri made these choices and I respect the artistic courage he demonstrates by making them.
There seems to be a redemptive drive in the narrative of Iron. Decisions need to be justified, lives need to have purpose, wrongs must be righted, individuals must be acknowledged, and family names must be cleared. There is an attempt at some sort of resolution, some sort of healing in this book, and its quietness, I think, helps it achieve its goal. You just have to be open to it, which may take a second read done with intent and trust.