Author's Note: This Column Originally Appeared on Comics Bulletin
CHEAP THRILLS
Random Pulls from the Bargain Bin
In these economic times, finding inexpensive entertainment is difficult. Thank goodness for my local comic shop and a slew of comics nobody cares about anymore! Each week I randomly grab a comic from the bargain bin (for 50 cents) to see what kind of bang I can get for my two-bits. These are those tales. 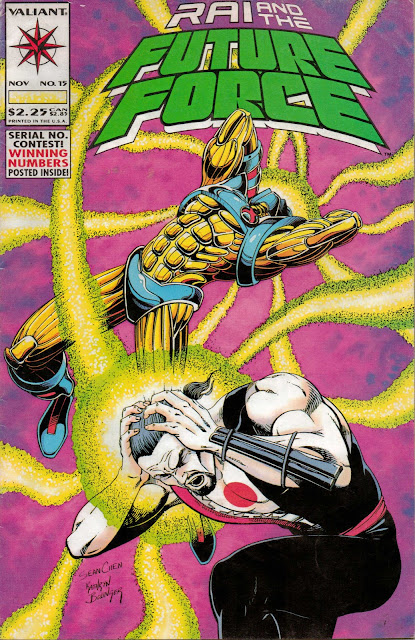 YOU FLOOKIN’ DIRTBAGGERS THINK YOU GO WALKING, THINK SOME MORE.
For some reason November of 1993 seemed like it was an important moment in American history. Was it that The North American Free Trade Agreement (NAFTA) was signed into reality? Was it the deaths of H. R. Haldeman or Bill Bixby?

Was it the release of Wu-Tang Clan’s Enter the Wu-Tang? Was it that Robocop 3 or Ernest Rides Again opened in movie theaters across America?

Or was it that Britney Spears, Justin Timberlake, and Christina Aguilera joined the cast of The New Mickey Mouse Club?

While all these events certainly contributed, I don’t think any of these events really made November of 1993 stand out.

So what was it about November of 1993 that distinguished itself from all the other Novembers that preceded it?

Then again, I had such low expectations for this comic that I could be misreading this whole thing entirely.


See, I had stopped reading superhero comics in the 1990’s. The reasons for this were myriad, but mostly it was because the storytelling during that decade had sunk to pablum levels, and, much like watching an episode of Jersey Shore, I often felt stupider for having experienced it. So, it was with great trepidation that I opened up Rai and the Future Force #15, as I greatly value my ability to have lucid conversations.

Rai and the Future Force #15 opens with a splash page of what appears to be an invading force of insectoid robots (which is a great band name, by the way) shootin’ lasers and blowin’ up stuff. 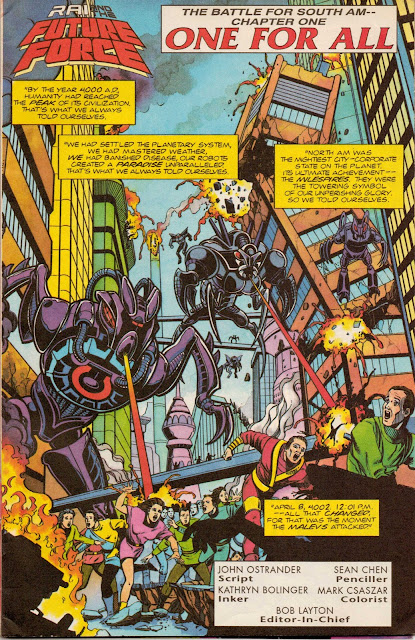 Shootin’ lasers and blowin’ up stuff is always a good way to start just about anything (I’ll tell you about a job interview I had one time if you ask), but this scene also serves the function of providing some back story. Having a comic provide some context before leaping into its story is like getting off a train in a station in Bulgaria and having someone hand you a map, especially for a new reader. It orients you, and it makes you feel welcome.

Thank you Rai and the Future Force #15 for this little kindness.

So the back story is basically that in the year 4002, the Malevs (creatures from a “Robotic Planet”) have attacked the paradise that was North Am (“the mightiest city-corporate state on the planet”), and using “Ectotheric Energy” were able to gain control over all North Am robots by seizing control of the “Main Brain”. There is a rebel group, the titular Future Force, composed of Magnus the Robot Fighter, XO Commando, Elzy, Slagger, Tekla, General Timbuc, Gilad-Ani-Padda, Spylocke, Rokland Tate, Izak of Phobos, and Rai. Please remember all these names, as there will be a test at the end of the column.

After doing some quick internet research, it became apparent that Rai was a pretty major character in the Valiant Comics universe. For those of you for which this is important, I feel obligated to let you know that this incarnation of Rai is housed in the person of Takao Konishi. Then again, if you are the kind of person who needs to know these sorts of things, you probably already knew that. I guess I just wanted to let you know that I knew and try to avoid being yelled at.

So, with the back story in place we enter the world of Rai and the Future Force #15 with Leeja Clane, daughter of the former president of North Am, making an appeal to the leaders of South Am to join together, link their respective Main Brains, and fight against the Malevs. But all is not well in South Am. 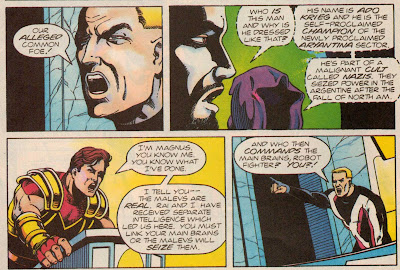 Damn those Argentinean Nazis from the year 4002. They are always messing things up.

Rai tries to bring everyone on board (especially that damn future Nazi) using his “latent Harbinger trait -- that helps him to ignite belief within others in what he truly believes himself” which seems to take the physical form of a glowing crystal. 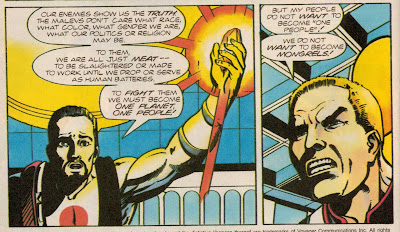 But future Nazis are still Nazis and won’t be swayed by glowing crystals and puppy dog eyes (believe it or not). A matter of fact, the Nazi is so much opposed to the idea of human unity that it sends some kind of Nazi feedback out into the ether. 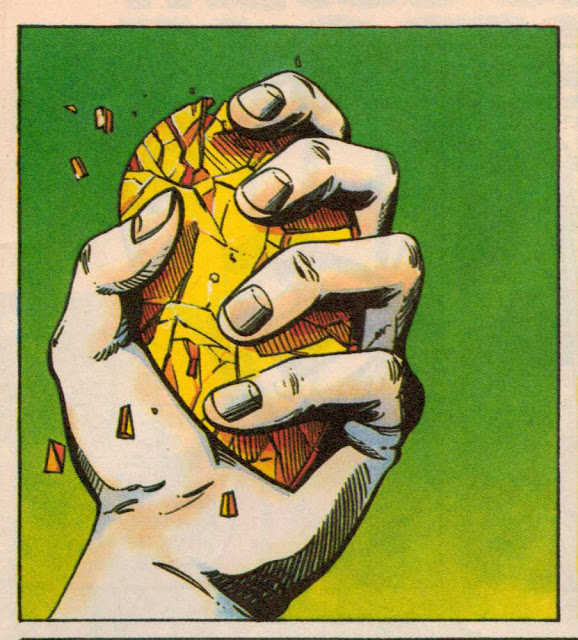 Since the Nazis won’t play ball, all the other South Am leaders bail on the whole uniting to defeat a common enemy thing. This leads Magnus to go all coup d’état on their asses which plays right into future Nazi’s heil Hitlering hand and gives him an excuse to show off his jewelry. 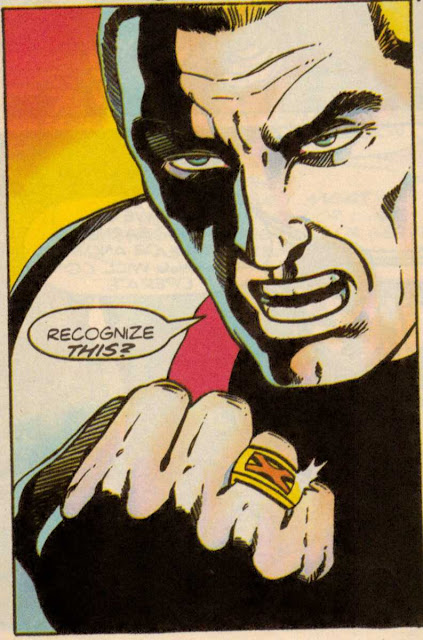 Ummmm….. no. Is it a Xavier Institute Graduation ring? A runner-up gift from the X-Games? Something you got from a box of Cracker Jacks?

So the future Nazi gets all armored up and starts blasting. This leads to the following fight scene: 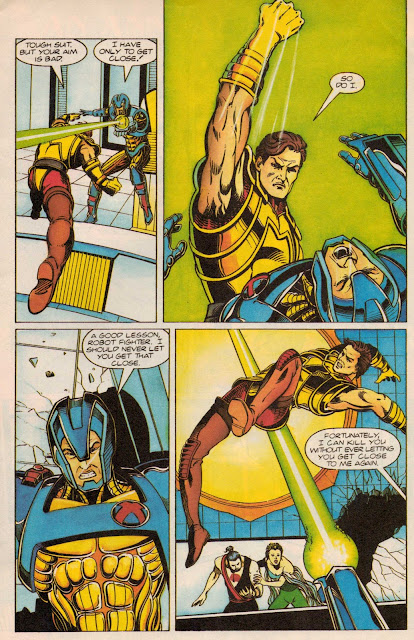 Make up your mind on the whole issue of closeness, Mr. Nazi!

Also, you’ll notice in the upper right hand panel of this page the whole background goes green all of a sudden. I don’t think this is some environmentally friendly message, either. This is something that happens throughout this comic. In most every panel in this book there are rather detailed backgrounds that really helps locate the reader in the setting of the story. Every once in awhile, though, it just washes out entirely and seemingly pulsates with green or orange or yellow or white. Is this supposed to add an emotional tone to the panel? Was artist Sean Chen running behind and colorist Mark Csaszar had to play fill-in? Whatever it is, it does distract from everything else.

Anyway, the Nazi is blasting all over the place and Rai steps up to save the day. Rai has the “Blood of Heroes” that lets him “take command of things mechanical” so he tries to “Mindlock” with the Nazi’s armor. 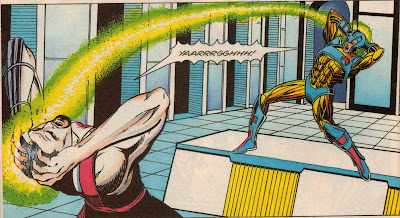 Apparently the armor is “living” and it fought back on its own. This makes me wonder if the armor is a Nazi as well and, if so, how does that manifest itself in terms of its political and social belief system. Questions like these, though, sort of detract from the story. I’ll just let it go.

The armor is a little discombobulated by Rai’s attack though, and this leaves future Nazi with no other option than to run. Magnus, XO Commando, and a guy in a purple robe go after him.

In the confusion, the other South Am leaders decide this is a good opportunity to high foot it out of there, but they are stopped by Slagger. 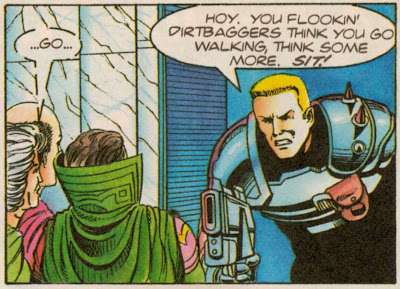 You Flookin’ Dirtbaggers is also a pretty good name for a band.

Rai takes command of the situation and orders everyone to start linking the Mainbrains. Slagger takes umbrage with Rai’s assumption of command, which gives Rai the opportunity to tell everyone how much the responsibility of saving the human race weighs on his shoulders. 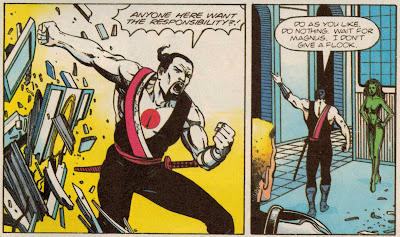 So Rai storms out in a huff, only to be followed by Leeja. In some sort of courtyard, Rai continues his self-pity rant which seems to have some sort of aphrodisiac effect on Leeja (hmmm… note to self, ladies dig the self-pity), which she acts upon. 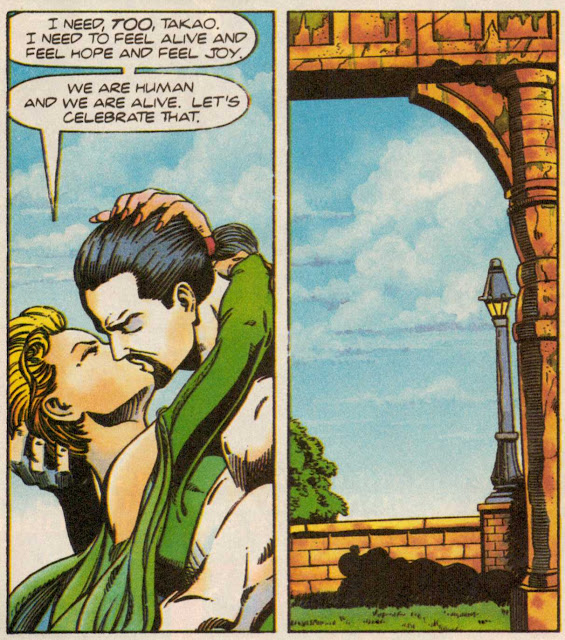 Ooops, they fell over.

There is a quick four panel cut to the Amazon Rain Forest where bug robots are setting up “installations” and are being watched by red eyes in the underbrush. Then back to the main plot where Tekla walks in to inform everyone that she just saw Rai and Leeja boning in the courtyard. The fact that Rai and Leeja walk in right after Tekla’s announcement seems to condense time quite a bit, making me wonder about how much time Rai and Leeja were actually together doing what they were doing, and also making me feel kinda dirty for even wondering about these things.

Thank you Rai and the Future Force #15 for providing me with “mature” content which only makes me think immaturely.

Then there’s some conflict between Timbuc and Leeja having to do with unrequited love. Slagger apologizes to Rai for questioning his authority. Rai starts barking out orders. Leeja looks wistful which prompts Rai to ask her if she regrets their down time together (which also leads to questions I don’t want to ask), and then the comic cuts to the palace of the Malev leader (oh yea, remember the plot). 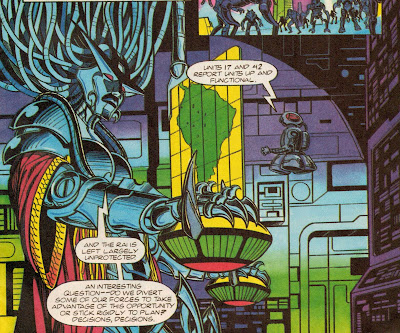 The Malev leader seems to have a particular flexibility in thinking when it comes to goal setting. He also seems to have identified Rai a real pain in his ass and decides that now is the time to eliminate him.

The comic ends with Leeja and Rai standing together in some observation deck tower place thing. 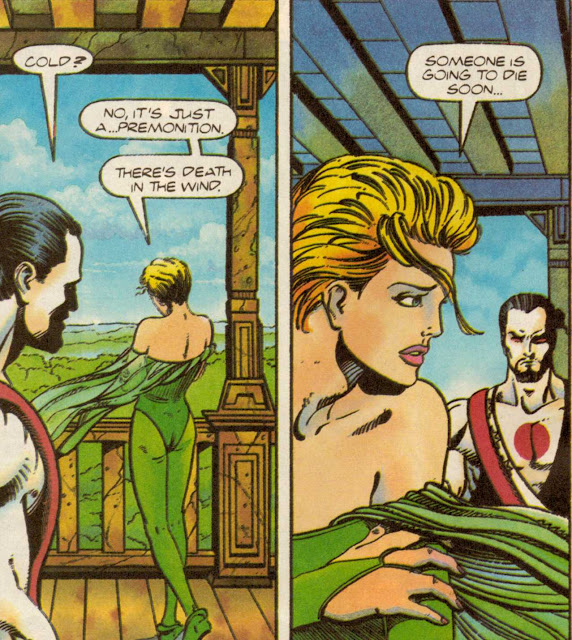 If you ask me, that is a pretty flookin’ good serialized storytelling cliffhanger moment right there, baby. I thinking that I should end all of my columns with a line like “Someone is going to die soon…”

At the beginning of the column I talked about this comic being transcendent because it worked on all these levels. I mean, think about it. You’ve got the basic structure of a sci-fi action story here operating on a whole paradise lost schematic. You’ve also got the whole robot vs. human conflict which functions as a metaphor for the whole Cartesian Dualism thing (further complicated by Nazi armor being alive). You’ve got fascism contrasted with global unity complicated by seizing power in a totalitarian manner in the name of the “best thing for the survival of mankind”. You’ve got Rai’s struggle between what he wants as a man and what he needs to do as a hero. You’ve got questions of intimacy and its affect on team dynamics. You’ve got levels here.

You’ve also got some life lessons, most importantly that the ladies love the self-pity act.

Seriously, though, Rai and the Future Force #15 is a pretty flookin’ complicated piece. It also has a pretty good pace to it and was a hell of a lot better than I expected it to be.

Sure there are some issues with it and it is by no means perfect (i.e. the sudden background washes). While its publication didn’t change the world, for fifty cents I’m pretty happy.

Then again, the responsibility of making these kinds of judgments weighs so heavily on my shoulders. My reviewing powers are not enough, my beliefs are not enough. I’m not even allowed my own fears! I cannot let myself be a man!

Oh, and yea….. Someone is going to die soon…