Author's Note: The article originally ran on FORCES OF GEEK! 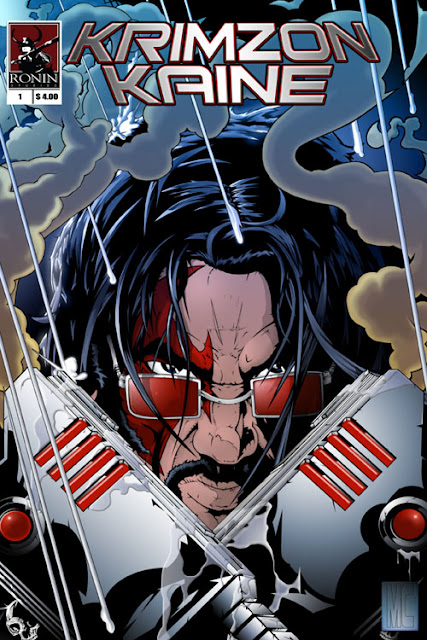 Mike Campeau is a Canadian. He seems, for all extents and purposes, to be one of the nicest people I have ever met. He also creates comics – crazy, action-packed comics. He has just recently released the first issue of his new series, Krimzon Kaine.

Krimzon Kaine is Mike Campeau’s first full length comic series and he’s darn proud of it. He describes the book as “a high impact, heart-pounding, action story” that’s got it all “including action, politics, crime, love, fast cars, and street wars.” It is set in a near future, but contains “a dab of distant science fiction.” Campeau rubs his hands together and says the “story is always running the red line to keep the reader pushed back in his or her seat by throwing endless twists and featuring action-packed characters. It’s action to give any action lover a fill-up.”

Apparently the key word for Campeau when talking about Krimzon Kaine is “action.” 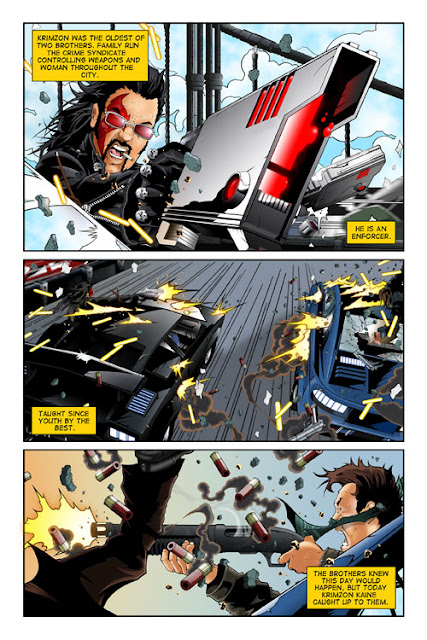 Campeau goes on to say that Krimzon Kaine was “formatted to feel like an action packed motion picture made as a comic book,” and he wants readers to “feel out of breath like they’ve been running alongside the characters” after they have turned the last page of the book.

Krimzon Kaine pretty much lives up to Campeau's assertions and jumps right into the action with a hail of bullets and cars careening through the streets. The title character has escaped from prison with the help of Thorne, his sexy side-kick, and they are on a vengeance mission with all their guns blazing and their feet pressing the accelerator to the floor. 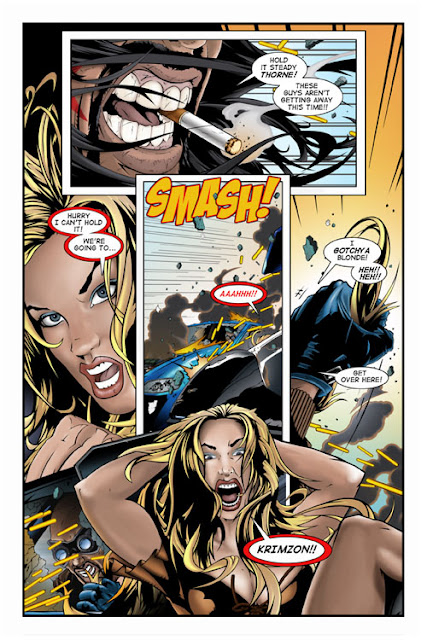 Campeau’s art is dynamic in this book. There is a great deal of energy and passion to his panels. There is also that crispness that digitally produced pages provide, and Campeau seems to have a pretty good grasp of how make his art come alive. I was reminded a bit of the work of Greg Land, as a point of comparison.

Living in Ontario, Campeau draws much of his inspiration from his “spirited daughter,” his dreams, and old Conan, Warlord, and The Micronauts comics. He also owes a lot to Barrington Barber’s Anatomy for Artists, Christopher Hart’s How To Draw Heroes and Villains, and How to Draw the Marvel Way by Stan Lee and John Buscema. 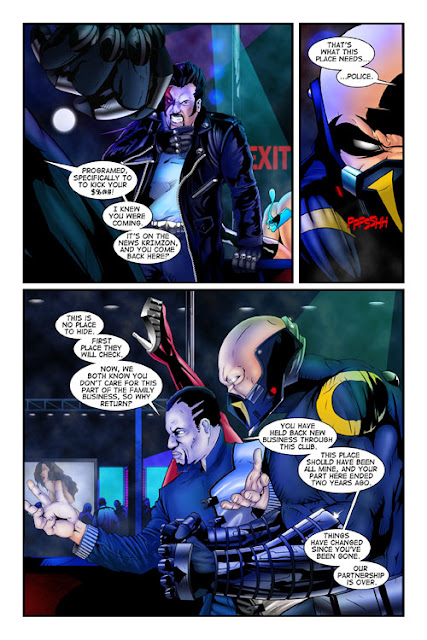 Krimzon Kaine is published by Ronin Studios, “a not-for-profit organization dedicated to helping comic creators realize their dreams of working in the comic industry.” The biggest challenge he faced while creating this book was finding available time, as his focus has been mostly pointed towards being the best parent he could be to his young daughter. “When she slept, I created,” said Mike. His biggest reward so far has been holding the published book in his hand after all that work.

My only criticism of Krimzon Kaine is its pacing. The book feels rushed, as if Campeau wanted to get as much as he could into the initial story in order to set up all the twists and turns he has in mind for his characters. This results in some wooden writing and an almost frantic jumping from scene to scene. As Campeau gets more comfortable with the story he is telling and the characters that inhabit it, though, this should get better. 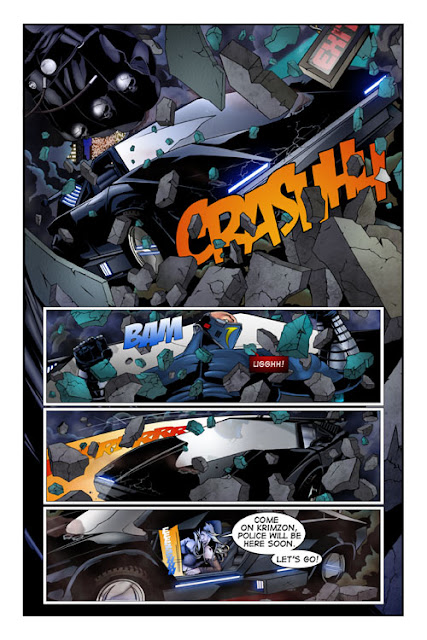 Still, if you like your entertainment to be packed with action, Krimzon Kaine will not disappoint you. Campeau has got that part down, for sure.

I said earlier that Mike Campeau seems, for all extents and purposes, to be one of the nicest people I have ever met. When I asked Mike at the end of our interview if there was anything else he’d like to share about Krimzon Kaine, comics in general, or anything else, he stressed how much he really liked being part of an active creative community and wanted everyone to know that anyone could contact him anytime with any questions about comics, creator-owned properties, or anything else. He can be found on Twitter as @mikecampeau, or on his main site.

Right now Campeau is working on Krimzon Kaine Issue 2 and a new creation with writer Adrian Wilkins called The Shadowsoul.

Krimzon Kaine is available for purchase at IndyPlanet.

Here's a Preview Campeau put together for the book: