CHEAP THRILLS
Random Pulls from the Bargain Bin
In these economic times, finding inexpensive entertainment is difficult. Thank goodness for my local comic shop and a slew of comics nobody cares about anymore! Each week I randomly grab a comic from the bargain bin (for 50 cents) to see what kind of bang I can get for my two-bits. These are those tales. 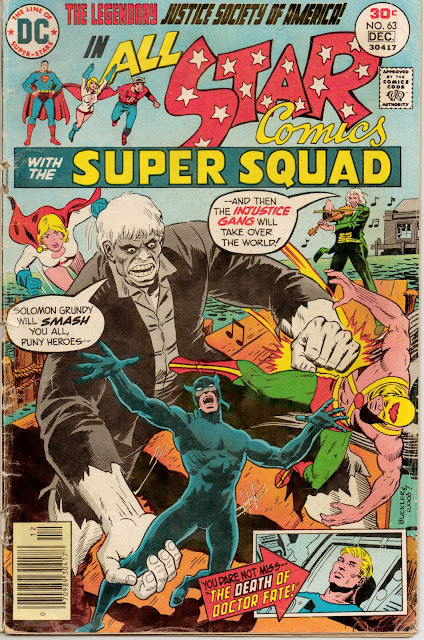 CAT HAS MADE GRUNDY MAD!
I cheated this week, and I am man enough to admit it.

Normally for this column I randomly pull comics from my Local Comic Shop’s bargain bin, but this week I happened upon a garage sale run by this truly twisted tweeker couple. Amongst the rusted lawn mowers and torn baby clothes, I inadvertently found a torn-to-shit comic book among the stacks of old coverless magazines they had piled in the dirt.

Samoa joined the United Nations, Richard Daley, the Mayor of Chicago, died, and Jimmy Carter was girding his loins to take on the mantle of our 39th President (and then later sinned in his heart).

Also, The Sex Pistols spewed profanity on the BBC, Bob Marley got shot in a failed assassination attempt, The Eagles released their album Hotel California, and, in the movie theaters, a very sexy Jessica Lange got scooped up by a giant monkey (not Jeff Bridges, but the bigger one).

All this created a veritable stew upon which to stew. The added spice to the meal, though, had to be the publication of All Star Comics #63.

The tall toothless tweeker wanted seventy-five cents for the comic. I distracted him with something shiny and gave him twenty-five cents. He seemed happy with this.

For a solid quarter we are really talking Cheap Thrills.

But on to the book at hand.
All Star Comics began in the 1940’s and was the birthplace of DC’s Justice Society The Justice Society at that time was made up of the Flash, Hawkman, Hour-Man, the Spectre, the Sandman, Doctor Fate, Green Lantern, the Atom, Doctor Mid-Night, Starman, and Wonder Woman (as their secretary). The comic folded in March of 1951 as public interest in superheroes waned and the book was then re-titled All Star Western until 1961.

In 1976, DC brought back All Star Comics as a format to once again showcase the Justice Society. They took up the numbering of the comic from its original incarnation and began with #58. It ran for seventeen issues and was the first regular DC series to take place in their alternate continuity, the blandly titled Earth-Two.

Issue #63 of the series stands out in my estimation for a number of reasons. First, I read it. Second, it has Solomon Grundy in it. Third, it is outstanding! The tag-team of Levitz, Giffen, and Wood are seemingly at their peak in this book, and it rides, baby. It rides! 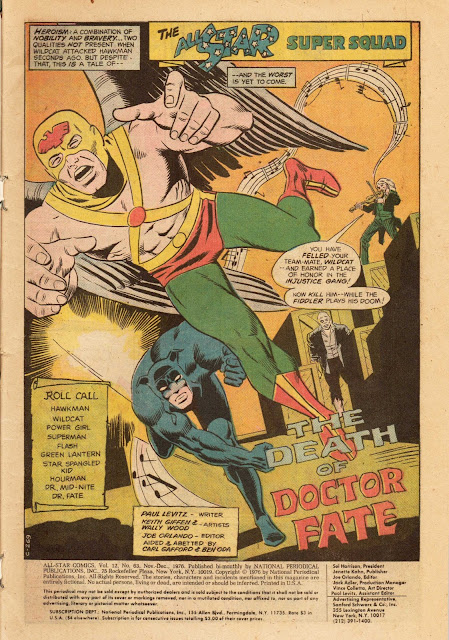 The comic opens with a splash page depicting Wildcat punching Hawkman in the back (a ten yard penalty in my book) while The Fiddler plays what I assume is The Ramones’ Blitzkrieg Bop, and Solomon Grundy does his best department store mannequin impersonation.

The Fiddler, for those of you who do not know, is able to play music from his fiddle that clouds people’s minds and makes them think they are engaged in some other activity. It also makes them make rather amusing faces. 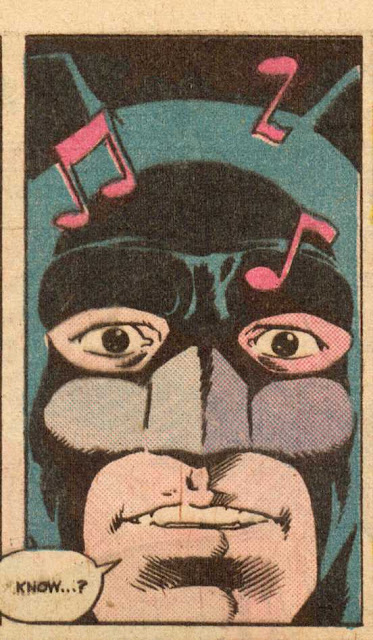 So Wildcat, under the influence of the Fiddler’s tune, thinks he is back in the ring (he’s a former boxer) in a must win situation.

I absolutely love the composition of these three panels. The giant pink music notes really bring the whole pastiche together – although it does make me think that my original Ramones designation might be wrong. Maybe it’s Queen’s We Are The Champions?

Anyway, Wildcat hands Hawkman a serious beat-down, to the point where everyone is convinced he’s dead. The Fiddler celebrates by stopping the music. This, of course, brings Wildcat out of his reverie and gives him time to punch The Fiddler around for a bit.

The Fiddler doesn’t like this much and tags out, allowing Solomon Grundy to enter the fight.

Attention Readers: I like Solomon Grundy very much. I can’t put my finger on the exact reason for this. Is it the fact that he wears a sports coat? Is it because he talks like Drunk Hulk? Is it because he always refers to himself in the third person? Is it because he is an anachronistic misunderstood albino dynamo? Whatever the reason, this gigantic monosyllabic undead thing has stolen my heart, and if I gush enthusiastically from here on out about him, please be aware that I have forewarned you.

So Grundy steps in. Wildcat throws an obviously ineffectual punch into Grundy’s groin, then kicks him in the back (what is it with these back attacks anyway?). “Grundy Never Fall!” 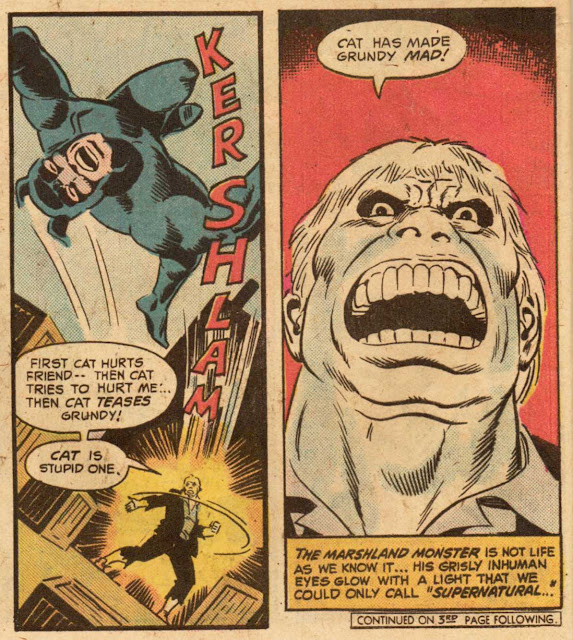 “Cat is stupid one. Cat has made Grundy MAD!”

Come on, this is dialogue worthy of Chekov or Mamet or Stoppard. Solomon Grundy is the Everyman and the Ubermensch at the same time. I kneel before him and his enormous white teeth!

After knocking Wildcat senseless, Grundy moves in to punctuate his point

only to have his Tony Award winning moment interrupted by the dues ex machina of Power Girl and Superman. 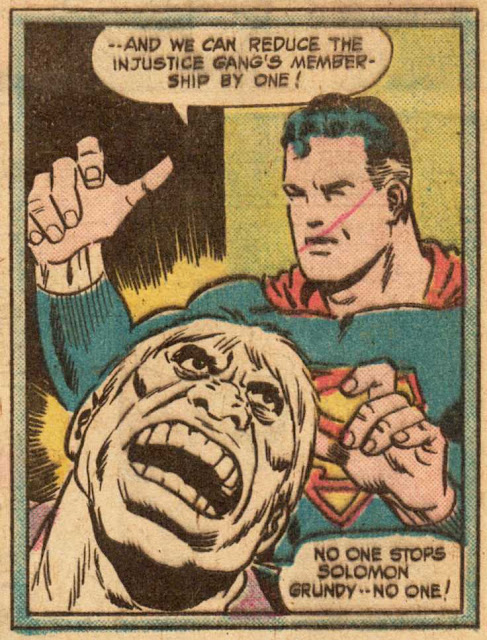 Oh the pathos in Grundy’s eyes. The missed opportunities, the awards, the acclaim….

Superman and Power Girl grab Grundy, fly him off, and drop him in an active (but currently cooling) volcano. That’s pretty hardcore, if you ask me. Whatever happened to the “Justice” part of the Justice Society? Oh well, now we know the answer to the question, “How do you deal the physical embodiment of all human tragedy?” You drop his ass in a volcano.

A surprisingly not-dead Hawkman shows up with The Fiddler over his shoulder. He goes on and on in a sort of self-pitying hipster drone about how his wife was taken by some other bad guy named Zanadu (not to be confused with the movie starring Olivia Newton-John and Gene Kelly, which came out four years later) and their failure to stop it from happening. He ends his rant saying “I’m not sure we’re even MEN!”

Given the nature of the outfits they are wearing, I guess I can see why he might start questioning this.

In response, Superman strikes a rather startling pose 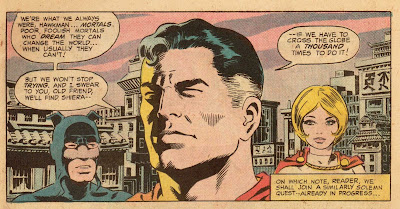 and starts getting all Hamlet in front of everybody. This is only a precursor of things to come, though.

There’s a quick cut to Egypt where The Flash and Green Lantern are trying to find a cure for the ailing Dr. Fate. It’s a half a page long, but apparently sets up some major stuff for the next issue. Since I have not read the next issue, I yell, “Next!”

Now we’re in the JSA Headquarters and we get this panel: 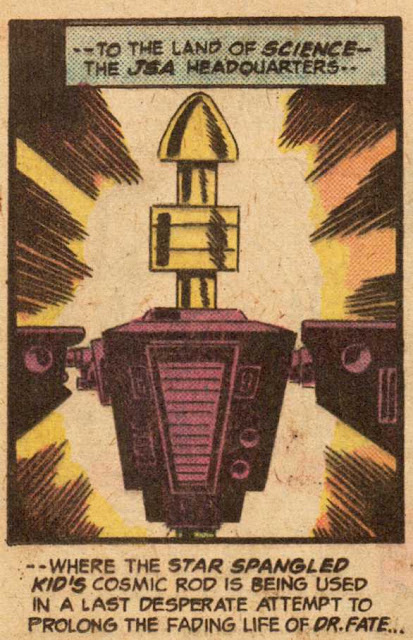 Really? The Star Spangled Kid’s Cosmic “Rod” – come on, you’re making this too easy. I mean, look at that thing….

Oh, and it gets worse:

What? Do we go smoke a cigarette now?

Anyway… With this phallic fallacy over with, Dr. Fate’s brain waves go flat. Apparently he was injured in the previous battle with Zanadu or something. And now he’s dead. Boom. One page is all you get (I guess this was before media-hyped superhero deaths meant big dollars in the coffers). 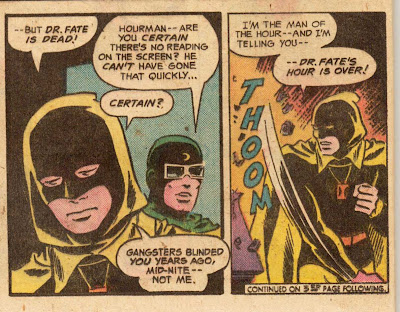 The three heroes wax on about the noble life of Dr. Fate, but Dr. Mid-Nite gets in the last word. 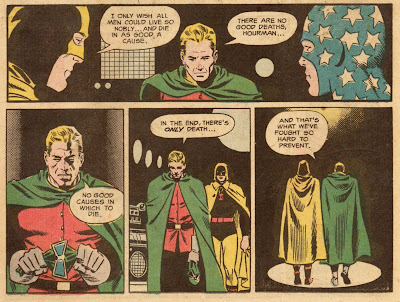 Great. Now I am totally bummed out. If even Superheroes have existential crises, what hope do I have in the face of my day-to-day First World problems? In the immortal words of Lloyd Bridges in the movie “Airplane”:


Thank goodness there are plot devices to distract us, though. The heroes hear that Zanadu has been spotted “over the city,” and they rush into action. Well, actually only Hourman and the Star Spangled Kid do the rushing. Dr Mid-Nite, on the other hand, stills wallows in the responsibilities of his free-will and the burdens of being all-too human. 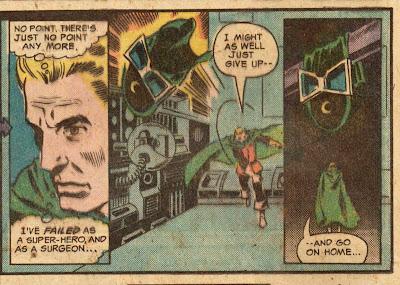 Man, I don’t know how much more I can take of this….

I need some senseless violence to raise my spirits and distract me from my thoughts. 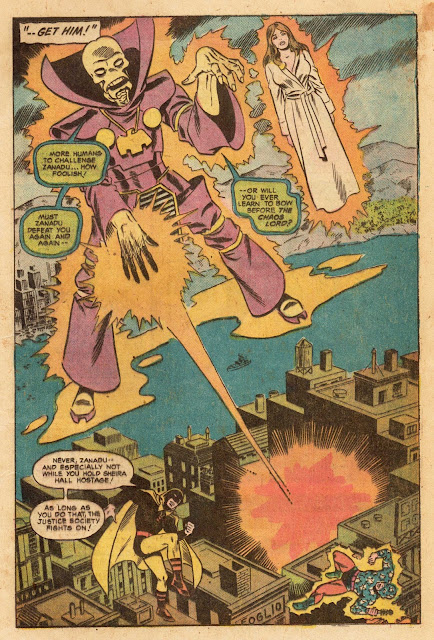 Yes, it’s the heretofore unseen but constantly referenced Zanadu, and not only he is a Disco Mystic (sorry Lou Reed), but he also talks about himself in the third person.

So we’ve established that our lives have no meaning and that all our decisions only lead to our eventual death. We’ve learned that all our claims of control are dandelion seeds buffeted about in the gale. We’ve understood that we are links in an endless chain wrapped around nothing. 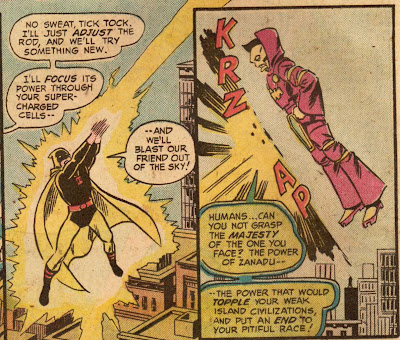 The battle over the city intensifies and the Star Spangled Kid calls once more upon the power of his Cosmic Rod (that’s like twice in an hour, no wonder they call him “kid”) to lay some serious smackage on Zanadu.

By happenstance Zanadu plummets into the JSA meeting room, down, but not out. Instead he channels his inner KC and The Sunshine Band to retaliate.

Do you hear that repetitive throbbing bass notes? Everyone else does. 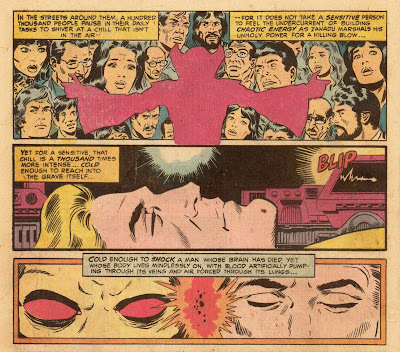 Apparently even the dead Dr. Fate.

Superman, Power Girl, and Wildcat show up out of nowhere, suddenly, and an epic final face-off begins. Zanadu starts coalescing his strobe light, gold chain, cheap cologne, platform boot, and twelve piece horn section powered energy for a final blast which will “engulf the world.” Suddenly, though, before Death by Disco can occur, Disco Dies with a sharp shot of Punk Rock.

Boo-Yea, Dr. Fate is back and he’s bringing the music.

This whole thing just rocks my world. After this long lyrical fugue stripping life of purpose, a man rises from the dead to punctuate the importance of the life force.

But it is also brilliant.

The party is over for this comic as we enter the last page, the epilogue. After having our fundamental conceptions of our own humanity brought into question and (maybe) then redeemed, Superman does what any normal person would do. 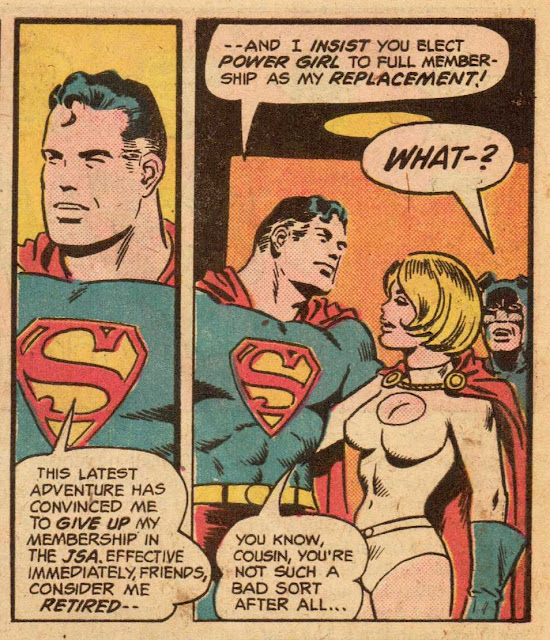 Considering the philosophical weight of what we have just been through, it’s almost understandable that the Man of Steel bow out. Fight it or flee it. Some battles can’t be won even with super powers.

Man, that was exhausting.

No wonder that tweeker wanted to sell this thing. In an amphetamine induced hyper-manic state, reading this comic would probably make your brain bleed.

Was it worth the quarter I spent on it, though?

From The Fiddler’s tune to Zanadu’s flares, this comic rocked on many, many levels.

Thank you, Paul Levitz. Thank you, DC Comics. Thank you, Keith Giffen and Wally Wood. That was one hell of a ride.

That, and I got me some Grundy!