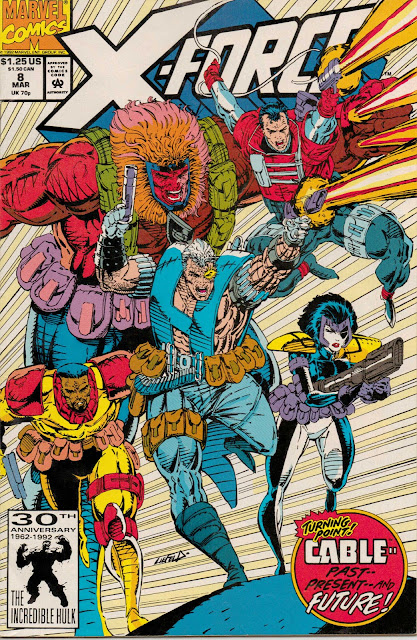 SOME REAR SUPPORT WOULD BE APPRECIATED.
So today we are looking back on March 1992. The Bosnian War is gearing up ugly. China ratifies the Nuclear Non-Proliferation Treaty. South Africans vote to end apartheid. Prince wins the “Heritage” award at the Soul Train Music Awards. The Jesus and Mary Chain release Honey’s Dead and Def Leppard release Adrenalize.

Rob Liefeld is comic’s golden boy. Among other things, he created this thing called X-Force which was wildly popular and its premiere issue sold four million copies. I was not one of the people who bought it. I had stopped reading mainstream comics by 1992, and Liefeld’s art style was one of the main reasons.

When I pulled X-Force #8 randomly out of the bargain bin and saw the Liefeld cover, my first reaction was to throw it wildly away from me as if I had just realized that what I was holding was not actually a clump of dirt as I had originally thought, but was in fact human feces.

But I am a purest at heart. The entire premise of this column is to randomly pick comics out of the bargain bin and write about them. So I held on to X-Force #8 with its Rob Liefeld cover, paid my fifty cents, and took it home and dreaded and fretted and ignored it until now.

When I finally got the gumption to finally open X-Force #8 to page one, my initial concerns about what I was to experience washed over me like melting ice cream on a toddler’s chin. 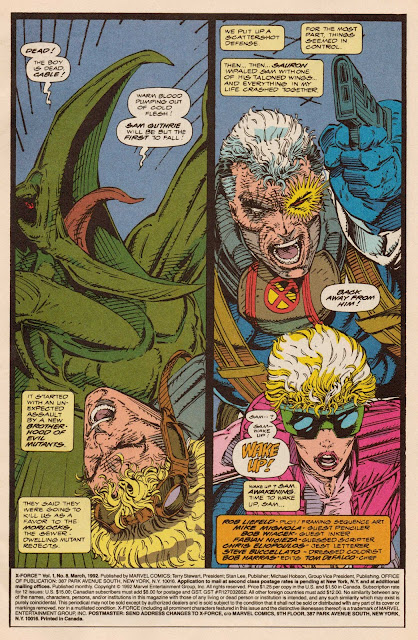 Text boxes everywhere, a preponderance of stippling and hash marks, LSD inspired perspective, and god awfully rendered hair filled my eyes and brought them to tears. Where the hell is this action taking place? Purple Town? The Lost Purple Dimension? Plum City? Backgrounds help us to figure out settings, you know.

So the villain Sauron has “impaled Sam with one of his taloned wings” and nobody seems particularly happy about this. Thank you first page.

Then I turn the page and it’s as if it is my sixteenth birthday and my dad had bought me a Porsche. Liefeld’s art mess is gone, BOOM, and is replaced by (you may want to provide your own drum roll here) one of my favorite artists, Mike Mignola! 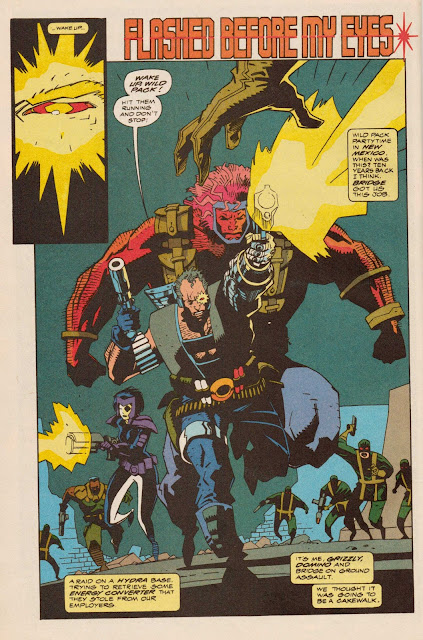 My tears of pain suddenly become tears of joy and I feel myself to be a blessed man.

Even better, the whole Sauron impaling Sam thing is gone too. We’re going flashback, baby, and anything is possible! Not only is anything possible, but suddenly everything takes on a thin veneer of awesome!

We’re ten years back in time (which puts us in 1982 when comics were still good) and the Wild Pack (consisting of the heroes Cable, Grizzly, Domino, G.W. Bridge, Garrison Kane, and Hammer) are attacking a Hydra Research Facility in New Mexico with all guns blazing.

The team is killing and laughing their way through the desert and making the jokes I would have made if I had the opportunity. Jokes like:

Anyway, Cable, Domino, Grizzly, and Bridge are slaughtering their way to the facility, taking out Hydra soldiers left and right. Grizzly destroys a Plasma Generator Cannon. There’s some more jokes made amidst the carnage and then the team starts ascending the facility to get to its roof.

There on the roof the rest of the team is waiting among some dead bodies and some more quick quips. 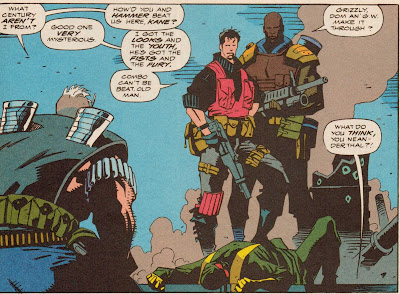 The team then enters the facility and begins to comment on how empty the place is. They were expecting heavy opposition and the lack of more people to kill is making them nervous.

Finally the team gets to the purpose of this mission.

Big Bomb Bad. The team is there to steal the Fiber Ionic Fibrillator which will cripple the Energy Matrix Channeler and Converter. It was at this point that I started to strongly suspect that “Guest Scripter” Fabian Nicieza was, as the British say, “taking a piss” (even though he is Argentinean), and this realization, combined with the relief I was still feeling from not having to look at Liefeld dreck and my happiness with Mike Mignola, made this comic spectacularly awesome!

Hammer goes to retrieve the Fiber Ionic Fibrillator while Cable frets about how quiet it is and Kane does some serious ego posturing. 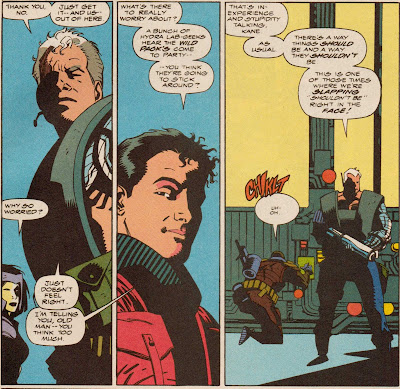 Did you notice in the final panel there the “Chiklt” sound and Hammer’s “Uh-Oh.”? The alarm has been triggered! 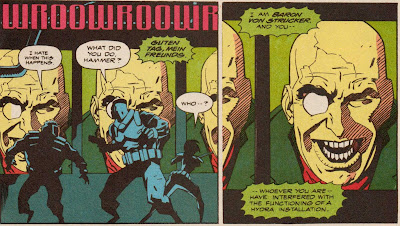 There is a meta-moment where Strucker announces that although it is typical in situations such as these for there to be five minutes or so of explication about complex plots and motivations, he is going to forgo all that and blow them up in 20 seconds. He ends the message with “I do hope your entrails do not unduly bespoil the beautiful desert landscape.” Nicieza is most certainly having a good time writing this one, and his enjoyment adds to my enjoyment and it’s all good.

Hammer gets the Fiber Ionic Fibrillator (that’s now the third time I’ve been able to write that!) and Cable “Bodyslides” the team out right before the explosion.

It turns out the team was working for Advanced Idea Mechanics (AIM) and they hand over the Fiber Ionic Fibrillator (four times!).

Basically, the team had been sent on a retrieval mission to retrieve something that didn’t even work. According to Cable, though, the amount of money they got from AIM “more than made up for the inconvenience.” That, and they got to say Fiber Ionic Fibrillator (yes, that makes five!).

The team goes their separate ways and Kane gives Cable the thumbs up.

No, you are not hallucinating. He did use the word “Beboobies.” He also did say, “Stay Frosty.”

As far as I am concerned, this is pretty much the end of the comic. It’s my guess that Liefeld, as the plot guy, reminded Nicieza at this point that this was part of a larger story and had to provide some sort of purpose for the flashback to mask in some manner that this was obviously a filler issue as Liefeld was slowly being pushed out of Marvel Comics.

So we get this complicated mishegas about Cable going back to his “time period” (which, in the hands of Mignola looks awesome).

Here is waited upon by robots with the names of the X-Men and is told about the “awakening” of a new possible “High-Lord” in the persona of Sam Guthrie. 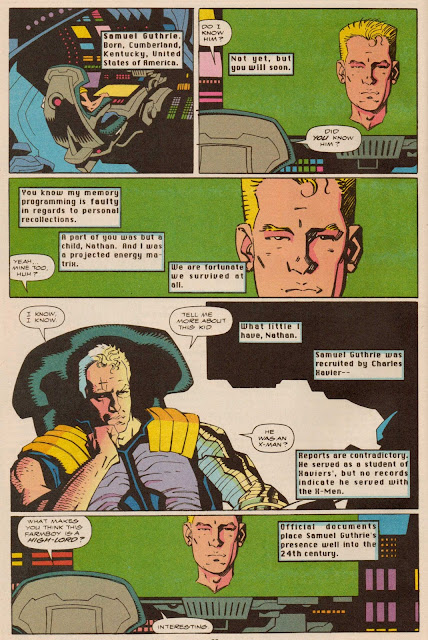 So Cable has to travel back through time to teach Sam how to be a man. The robots provide Cable with his “military accoutrements” for the journey and Mignola gives us this panel which, to my mind, is him totally making fun of Liefeld’s style. 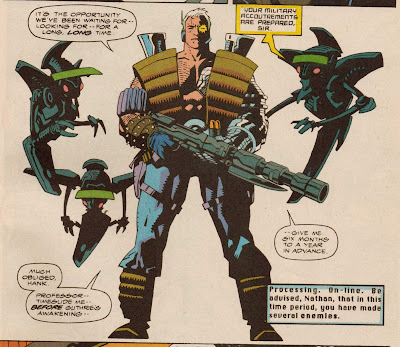 This is so endearing I can’t help but want to hug Mignola. When your own creative team begins to publicly mock you and your “talents”, it is certainly time to move on. (Liefeld left Marvel shortly after this issue).

Feeling all good about the way the comic read and looked and everything, I turn to the final page and 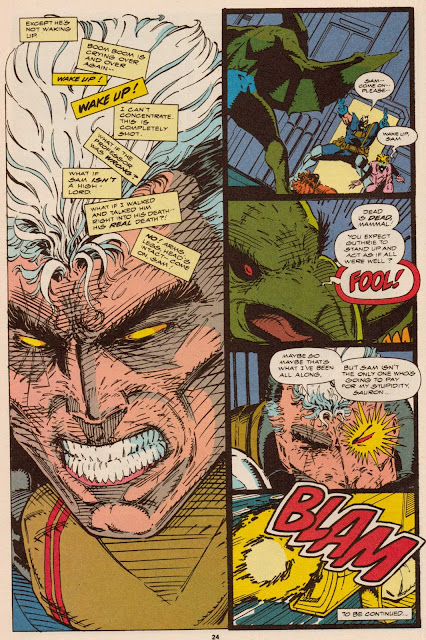 Liefeld has to remind us that there is still a continuity dependent story occurring and that he controls its course. The juxtaposing here between what Mignola and Nicieza had done and what Liefeld has ended the book with is as jarring as a spoonful of an ice-cream sundae followed by a spoonful of wasabi-covered cat vomit.

And to cement this point, Liefeld provides us with a “pin-up” at the very end, 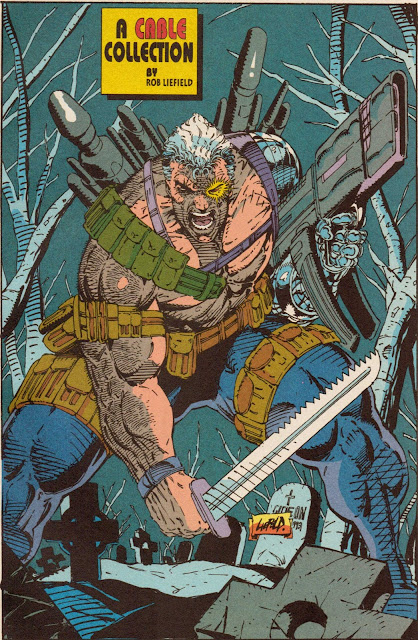 which you should now compare to Mignola’s panel earlier and laugh yer frickin ass off.

So, that, in a nutshell, was my experience with X-Force #8. X-Force #8 is a true reminder of the old adage, “Don’t judge a book by its cover.” I was convinced that I would have to be cringing my way through pages and pages of Liefeld 90’s comic art dreck based solely on the cover and my very limited knowledge of what the hell X-Force even was. Instead I got a super surprise from Mignola and Nicieza and had a heck of a time.

Fifty cents for Mignola and Nicieza to be seemingly “taking the piss” out of Rob Liefeld’s excesses of the 1990’s was fifty cents well spent.

Thank you X-Force #8 for that, and thank you too Marvel Comics for allowing it to happen.

Until next time, Stay Frosty!