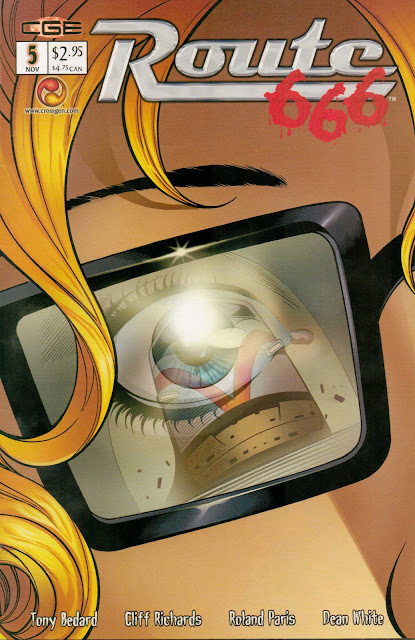 Nowadays you can’t be sure just who you’re dealing with…
There was a preponderance of weirdness in November 2002.

It was in November of 2002 that then President George Bush signed into law the creation of a new Department of Homeland Security, Gauthier Hulot of the Paris Geophysical Institute discovered evidence of a reduction of the Earth's magnetic field over the last two hundred years which he thought may indicate a reversal in the polarity of the Earth, and The Godless Americans March on Washington included 2,000 atheists and humanists parading down the National Mall.

Eminem’s Lose Yourself was all over the radio.

Into this weirdness, CrossGen published Route 666 #5 and this move, given the tenor of the times, made perfect sense. Route 666 #5 is weird, but it is weird in a good way and made for an enjoyable diversion from all the other weirdness that wasn’t so good.

CrossGen started publishing comics in 1998. In 2004 it closed up shop and declared bankruptcy. Disney then bought up their assets, and now Marvel is releasing some of their titles.

Route 666 was one of CrossGen’s few horror comics at the time and ran for 22 issues.

Let me just tell you right from the start that I really enjoyed this comic for a number of reasons.

To begin, Route 666 already wins my heart by providing a recap of the story so far in the form of a letter on the inside front cover. The letter is from Sheriff Francisco Fernandez of the Tucker Police Department and is addressed to Mr. and Mrs. Starkweather.

In this letter, Sheriff Fernandez details what has been occurring in the past four issues, to wit: Cassie Starkweather killed three people as she escaped from a mental hospital, hijacked the Sheriff’s squad car, killed the Sheriff’s son in a car crash, held the Sheriff at bay with a shotgun, shot ambulance drivers and claimed they were monsters (the Sheriff does say they looked like wolf-men when they attacked), and helped the Sheriff’s dead son’s ghost get to “a better place.”

It seems like I missed a lot in the first four issues. Thank you Tony Bedard and CrossGen for catching me up. It sure does add to my enjoyment of your comic when I know what the heck is going on (hear that, Secret Weapons). 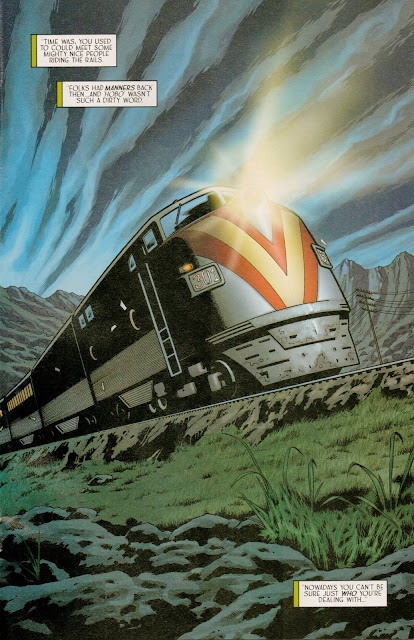 Route 666 #5 officially opens with a splash page of a train. I’m assuming it’s hurteling through the dark lonesome night, although it looks pretty static (no offense meant towards artist Cliff Richards as he redeems himself often throughout the rest of the book). A narrator tells us in text boxes that it used to be that you could “meet some might nice people riding the rails” and that “nowadays you can’t be sure just who you’re dealing with…”

I like this as it not only sets a suspenseful tone, but it also echoes what is apparently the theme of this series: Nobody is who they appear to be.

On the next page, it turns out that the narrator is riding in a boxcar on the train with four others. His name is Berkely and apparently he has been saying something like this for years. One of the other people in the car brings up a character named Railsplitter, who was apparently a killer of some sort. Berkely tells them though that Railsplitter “is an amateur compared to the killers they’re breedin’ these days.”

Upon Berkely’s suggestion, one of the girls picks up a stray newspaper. 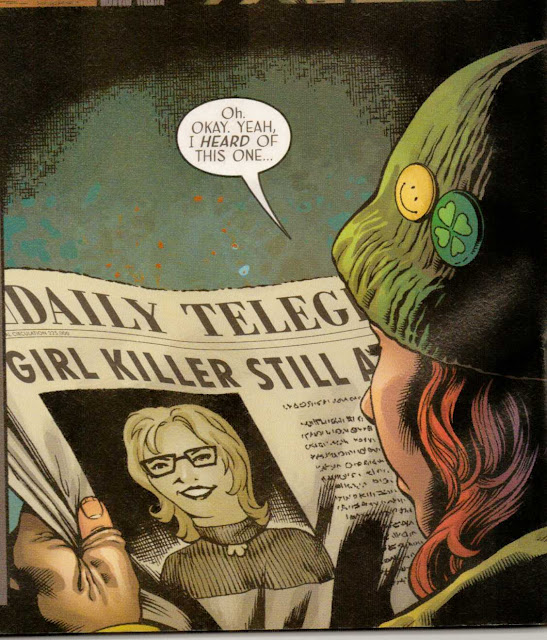 She reads the article about a “Girl Killer”. Through explication, it turns out that this Girl Killer is our hero, Cassie Starkweather, and that she “drove a fountain pen through a grown man’s brain.”

It also turns out that the “Girl Killer” they are talking about is sitting in the corner of the box car. 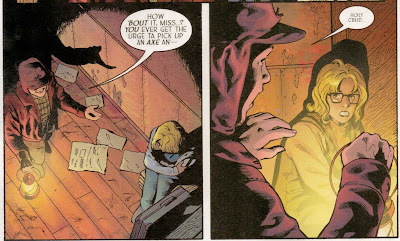 Upon being discovered, Cassie tries to escape, but the door is latched. The rest of the group figures there is probably a reward for Cassie’s capture, but Berkely convinces them to leave her alone. 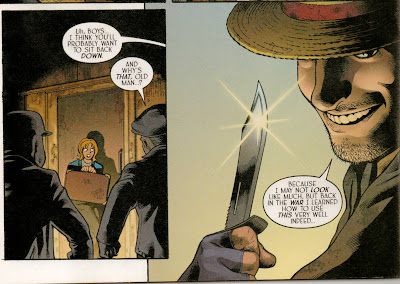 In the words of a great Australian Outback philosopher, “Now, THAT’S a knife.”

Cassie is able to jump from the train finally, and, after she dusts herself off, she notices that Berkely has jumped off with her too.

Apparently Berkely sees a person’s “true face” and doesn’t think she’s a crazed killer. He offers his help and wants to hear her story. Cassie explains what happened at the institution with the monsters, and how she thinks that the monsters are organized into a big conspiracy. There’s something about collecting souls and Dark Spirits and a place called Perdition and, were I going to read the whole series I would be interested, but as I only have this one issue, it’s just a bunch of noise in service of a larger idea and it’s not something I need to dwell on to enjoy this issue.

Berkely asks Cassie if she thinks there are more monsters out there other than the ones in the institution. It’s just then that Cassie spots a Mobile Meals van from the Stone River Hospital. There is a guy delivering meals to the elderly.

I’d say that classifies as a monster.

There’s a clever bit of artwork on the page which seems to indicate that Berkely sees the wolf guy as looking like an ordinary human, but he tells Cassie the opposite. It’s the kind of story telling trick that really only works in a visual medium, and I think works best in a comics format.

It adds another whole layer to the story concerning who Berkely is and what his motivations are.

Berkely tells Cassie that the only way to prove her innocence is to show everyone that these monsters exist, so they break into the office to see if they can find anything incriminating.

Unfortunately, they are discovered once they break in. 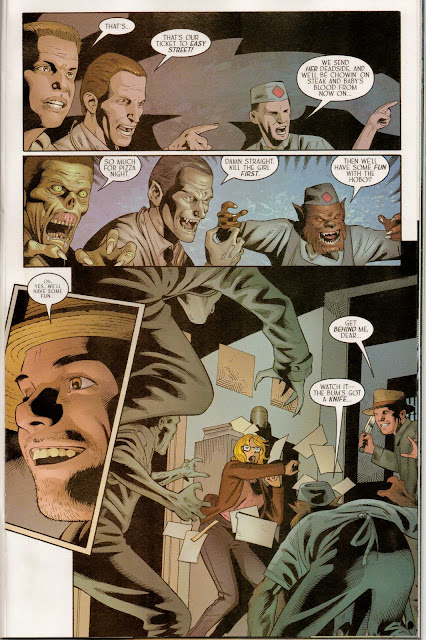 Oh yea, monsters! Oh yea, the bum’s got a knife!

Needless to say, Berkely knows how to use his knife.

First there is this: 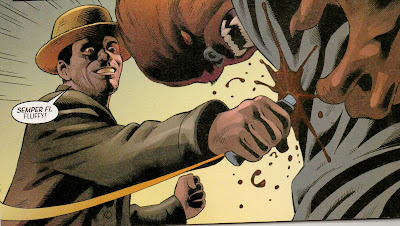 And then there is this: 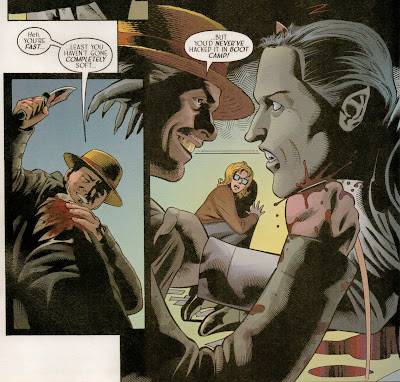 Once an injured Berkely has killed everyone, Cassie goes to try to help him. He turns the knife on her, but stops himself, claiming it’s just “nerves”.

At this point I have no idea what to make of Berkely. He seems like a nice guy, but he also is lying to Cassie in order to get closer to her. That, and he is wicked with a knife, killing at a drop of a hat.

Who is this guy?

This is great storytelling.

Cassie trundles Berkely into one of the food vans and they go off into the night. As they drive, Berkely takes off his shirt to dress his wound.

Here the creators of this book are adding more questions to this character. He claims that he was in prison for killing someone in self-defense. He then tells Cassie that the someone he killed was his father.

With that many tattoos, he must have been in jail for some time.

Once again I ask “who is this guy?”

The last page of the book is sort of a big reveal, as well as a sweet cliffhanger. We’re back at the train we saw on the first page (great bookending the story, Mr. Bedard). Some rail-yard bulls are looking in the cars to check for “Hobos”. One of them sees a light in one of the cars and jumps in to investigate. He exits quickly, vomiting. What has he seen? 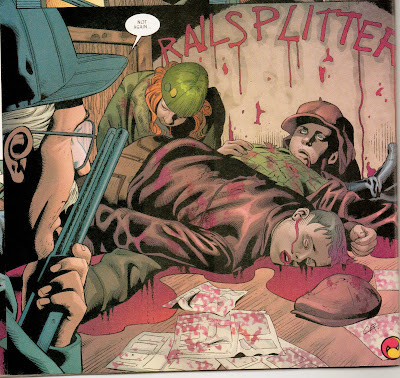 Beautiful! This is great storytelling in and of itself, and it makes great use of all that the comics medium has to offer.

I really enjoyed reading Route 666 #5 (and it was damn worth my two-bits!). It functions almost like a one-shot, but maintains an integral part to the larger story. Structurally, the book is complete. Thematically, while not breaking any real new ground, the comic is up to the challenge. The art is good, albeit a bit static at times, and Berkely is a fantastic character fully realized through a great combination of writing and art.

November 2002 might have been a weird time, and, while the concept of Route 666 is weird as well, the story telling in this issue is great.

Dare I seek out more of the series? I’d love to hear from anyone who’s read more of it to tell me if it is worth going on the hunt.

Until next week, stay weird everyone and watch out for hobos offering assistance. “Nowadays you can’t be sure just who you’re dealing with…”