Armed with this intellectual conceit, a bag of Funyuns, and a couple of Miller beers, I curl up in front of the TV and delve deep into the bowels of Netflix Documentaries to find out a little bit more about all of us. 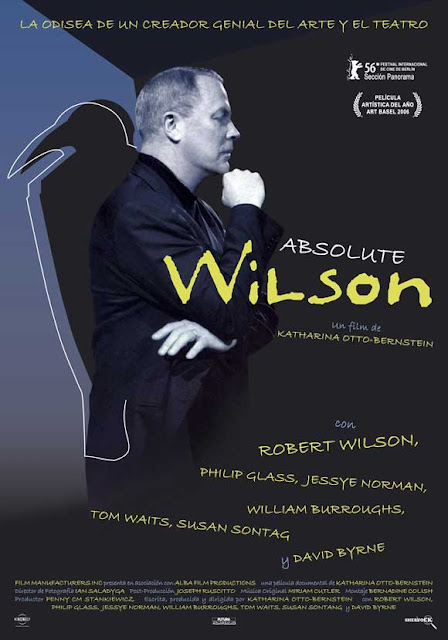 This documentary is ostensibly about the life and work of Robert Wilson, probably the premier figure in the avant-garde theatre world. On a deeper level, though, it is about human potential. It is a film about a man who happens to be an artist; it is not really a film about his art. As Ms. Otto-Bernstein has said, the film “tells a story for everyone to see how anything’s possible – it really is an extraordinary American success story.”

It is also, interestingly enough, a story about a father and a son. 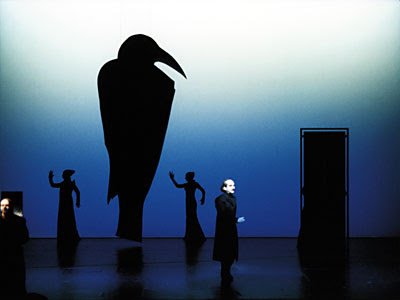 I first heard about Robert Wilson because of David Byrne, then the lead singer of the band The Talking Heads.

In 1985, Byrne released an album called Music for the Knee Plays which was a compilation of songs he had written for Wilson’s opera The CIVIL warS. I was fascinated by the music and listened to it over and over again. This was pre-internet days, though, and finding out any more information about what the Knee Plays were, other than what was listed in the liner notes of the album, was rather difficult for a suburban misfit teenager.

Wilson’s name next came into my consciousness thanks to the musician Tom Waits. He collaborated in 1990 with Wilson and the writer William Burroughs to create a play called The Black Rider. In 1993, Waits released the music to the play as an album.

Then Wilson collaborated with Lou Reed on the play Time Rocker.

After that, I had to find out more about Robert Wilson.

Wilson, though, was well known for his reticence and finding out much about him was difficult, to say the least. Needless to say that stumbling upon Absolute Wilson was a fortuitous moment for me. 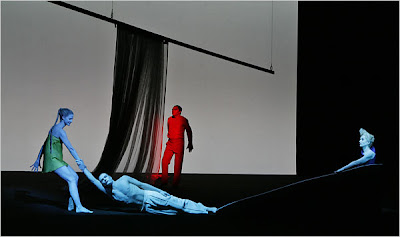 Ms. Otto-Bernstein says of her film, “This is a film about a full life, and art is part of it. It is not a film about art and life as part of it.” This is truly the guiding principal of the documentary. Through candid interviews with Robert Wilson and the likes of composer Philip Glass, writer Susan Sontag, Wilson’s sister Suzanne, and others, Otto-Bernstein allows Wilson’s story to unfold.

Growing up in the 1940’s with a learning disorder, a stutter, an artistic sensibility, and gay in conservative Waco, Texas, Wilson was the consummate outsider. Adding to Wilson’s issues was the fact that his father, Diguid Wilson, an athletic, all-American sort and mayor of Waco, couldn’t understand his son’s differences, and told Robert constantly that all of his “problems,” especially his homosexuality, could be “cured.”

Absolute Wilson focuses its narrative on how the issues Wilson faced growing up can inform an understanding of his art. It does a great job of juxtaposing stories from Wilson’s childhood with images from his plays and draws a number of parallels that add a layer of complexity to Wilson’s vision. 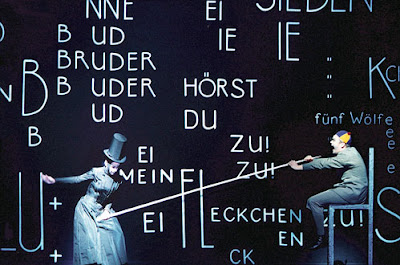 Wilson’s vision is what has brought him fame.

His productions are unlike anything being put on stage anywhere. They are beautiful, complex, surrealistic, baffling, disturbing, and take audiences to places they have never been. I think it is not hyperbolic to say that watching a Robert Wilson production challenges every audience member to examine their own conceptions about art and communication. I found myself constantly asking myself questions while watching clips of his stage plays, and that, apparently, is the point.

In a very telling moment in the film, Wilson says that the reason he works as an artist is to ask questions, specifically “What is it?” It is this question that is fundamental to our humanity and is, ultimately, the question that all art should be asking.

The documentary does have a sequential narrative. One of the downfalls of many documentaries focused on artists, especially avant-garde artists like Wilson, is that they tend to try to be art pieces themselves, usually to the detriment of the viewer. Absolute Wilson is straight forward, accessible, and engaging throughout the film.

While Otto-Bernstein talks about Wilson as being an “American success story,” she also brings up the fact that Wilson is primarily a star in Europe, where he is “a sort of rock star of the performing arts,” while in his own county he remains relatively unknown. Einstein on the Beach, an opera he created with composer Philip Glass, is probably his most successful production in America, and yet it is virtually unknown to the majority of Americans. 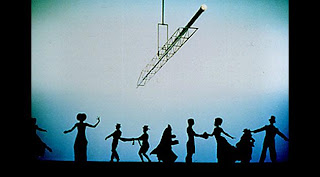 You don’t have to know anything about Wilson to appreciate this movie, though. You don’t even have to be open to avant-garde theater to enjoy it. Absolute Wilson is, at its heart, a human story. Robert Wilson’s story is a story that we can all learn something from, whether it is about overcoming adversity, seeking approval of a distant parent, or being true to yourself, Absolute Wilson provides a perspective on these issues that is as important as any.