Books In Bites 3: Three Comics Worth Your Attention

Quick Reviews of three books you may be interested in.
SUPERCAKES
by Kat Leyh
Published by Yeti Press
Available Here 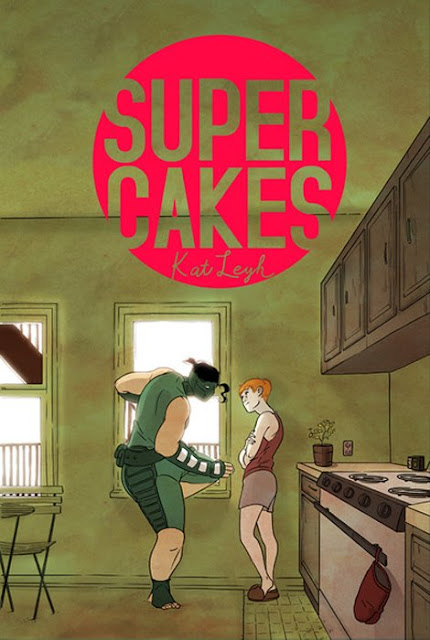 On the back of Kat Leyh’s wonderful new comic SuperCakes, it says this book “touches on topics most ‘capes and tights’ comics wouldn’t even fly near.” I assume this has to do with the central relationship Leyh explores in this book. While operating within the “punch em in the face while quipping” superhero overlay, SuperCakes is really a book about May and Molly and their budding relationship. 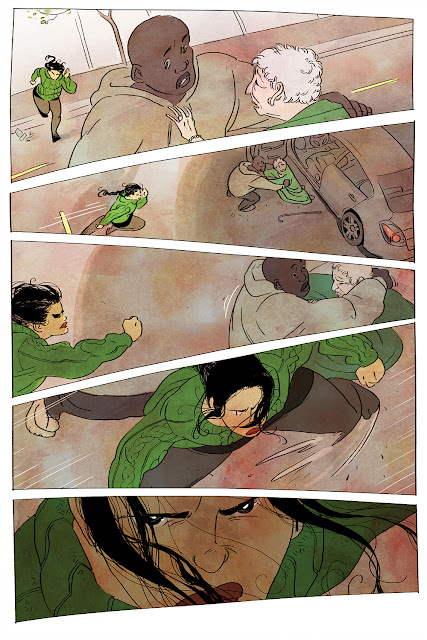 May and Molly are in the early stages of falling in love and, in a way, their superheroic team-up reflects the bond they are building as they become vulnerable to each other. May is the character more comfortable in herself and her sexuality, and, as Tank, her powers are “super-strength and a degree of invulnerability.” She solves her problems head-on, not shying away from conflict or judgement, caring so little about what others think of her that at one point she even wears a knit hat shaped like a cupcake on her head as she fights an invasion of ice-monsters wrecking her city.

Molly, on the other hand, is seemingly younger, not yet fully accepting of who she is, slightly ill at ease with her role in the world and in her relationship with May. Her shape-shifting powers metaphorically reflect the nuances and subtle actions of a young woman unsure of herself coming out to the world and committing to love. But she can absorb energy, subsume blows and explosions, and use that which is directed against her to become stronger and turn it back on her enemies.

And that, in and of itself, is a dynamic statement.

Both of these women are empowered. Leyh makes that clear by not only casting them in the trope, but also by carefully choosing how they operate within it. Their relationship with each other is easy, gentle, and loving. These characters serve as role models certainly in terms of their heroics, but also in terms of how relaxed and attentive they are with each other. 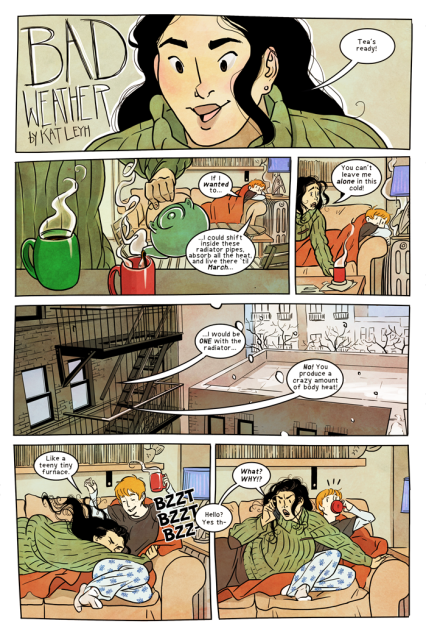 SuperCakes is positive, fun, engaging, and inspiring. Leyh shows that issues of racial and sexual diversity don’t have to be shoehorned into comics as if they are something added on in hopes of placating naysayers or tapping into a market. SuperCakes succeeds because, although it is about superheroes, it is about real people first.

You can grab a copy of this great book here. 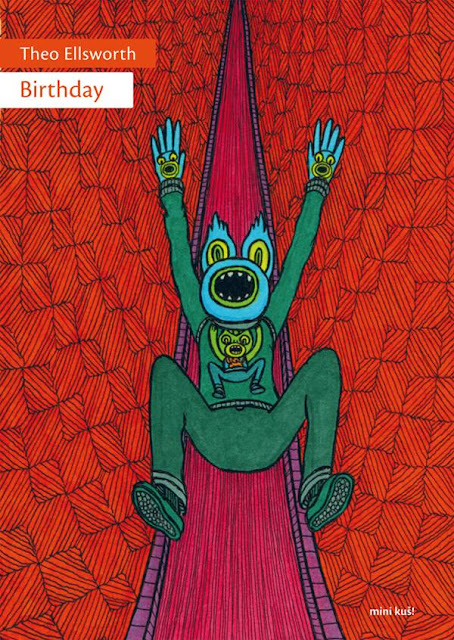 Nothing makes more sense in the world than Theo Ellsworth being published by Latvian publishing house kuš! komiksi. Kuš! komiksi has been putting out wild and beautiful mini comics and larger anthologies for years now that have explored the edges of what is possible in comics, while introducing and celebrating some of the very best artists working in the medium.

The last time I wrote about the work of Theo Ellsworth, I said, “Structured logic comes unglued quickly in Ellsworth's art, and it's not fully replaced with a primal or visceral understanding either. Rather, it demands a different way of interacting with the material.” Ellsworth produces comics that are unique. Books which burrow into your soul as only something completely new to your experience can. 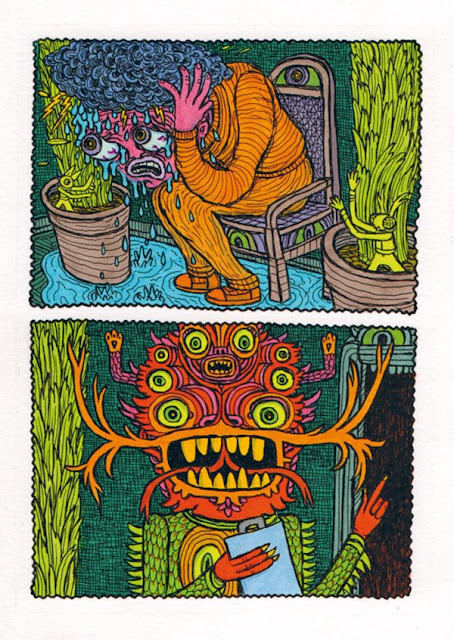 Birthday is what happens when you combine the editorial freedom of a publisher like kuš! komiksi and the purity of vision of an artist like Ellsworth. It explodes into being like a new universe is being created, and the ripples unleashed by it embrace you with beauty and with truth.

The solicitation of Birthday reads, “Our hero is insanely nervous. He's about to undergo an intense psychic initiation known as the Inner-Space Birth Ritual. You'd be nervous, too! Theo Ellsworth has faithfully documented our hero's bizarre experience in the pages of Birthday.”

What Ellsworth is able to accomplish in his art is project this experience directly into his audience. His tightly detailed and intuitive colored panels and pages transcend the paper they are printed upon and become an emotional energy that pushes into the heart of his audience. Your brain doesn’t process Birthday in a logical way. It makes sense of the narrative in an ecstatic and emotive understanding that is primal and holds you in an almost panicked state until the cathartic release at the end. 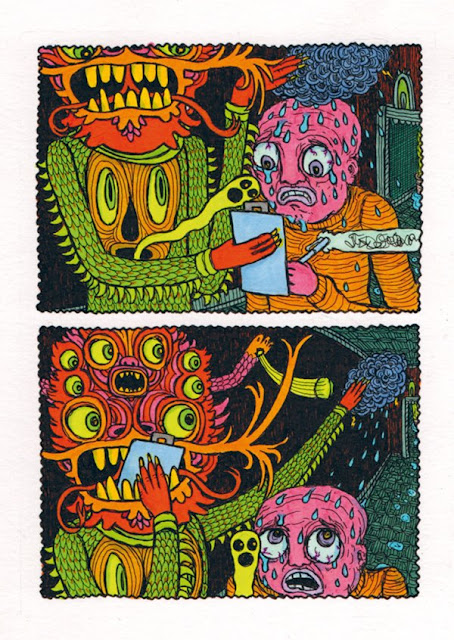 Ellsworth’s books are satisfying in a way no others are. They are psychoactive and to read one is to go through an experience that, while you are engaged in it, trips your vision into some other plane as if you have detached from the world around you. When you are done, though, and you return to your day-to-day, you carry with you new possibilities for seeing the life you have been living all this time.

You can pick up a copy of Birthday here. 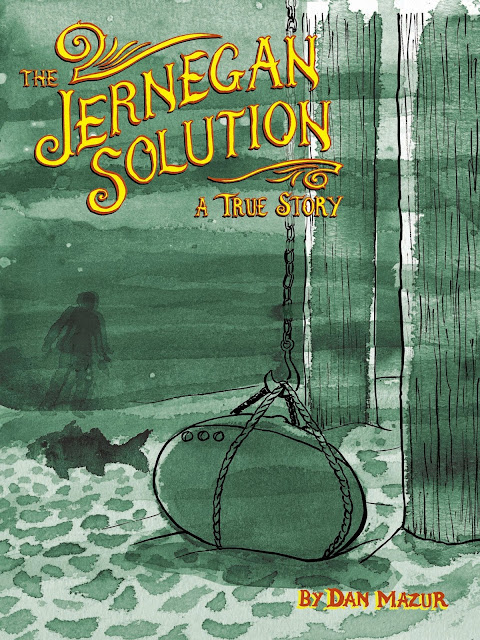 America is a country founded upon dreams of the impossible. For all its faults, there has always been an undercurrent of optimism and a belief that a fabulous future is just around the corner for everyone. This attitude has been responsible for all sorts of innovations and understandings that push us forward towards some brighter day, the green light, the orgastic future.

But this perspective has also been the fecund loam from which, throughout history, hucksters and charlatans have sprouted and thrived.

Dan Mazur’s The Jernegan Solution tells the story of this juxtaposition between American idealism and Americans who feed upon it. 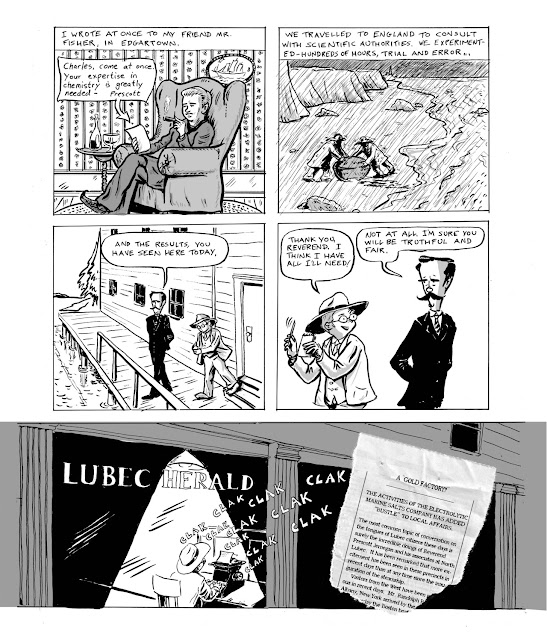 Of The Jernegan Solution, Ninth Art Press says, “Based on true events that took place in Lubec, Maine in 1898: Prescott Jernegan, a respectable Baptist minister, arrives in town with his partners and investors, claiming to have invented a process which efficiently extracts gold and silver from the water. An enormous ‘gold factory’ is soon in operation, creating sudden prosperity and the biggest excitement the little fishing village has ever seen.”

The story is told through the eyes of a fictionalized newspaperman, a narrative choice that allows the reader access to an objective recounting of the events that took place at the turn of the 20th century in this small town in Maine, but also gives Mazur space to editorialize without any sort of condescending sermonizing. The reader gets caught up not only in the events as they unfold, but also the optimism of the narrator. It’s a perfect choice for the story, adding an emotional depth to its reportage. 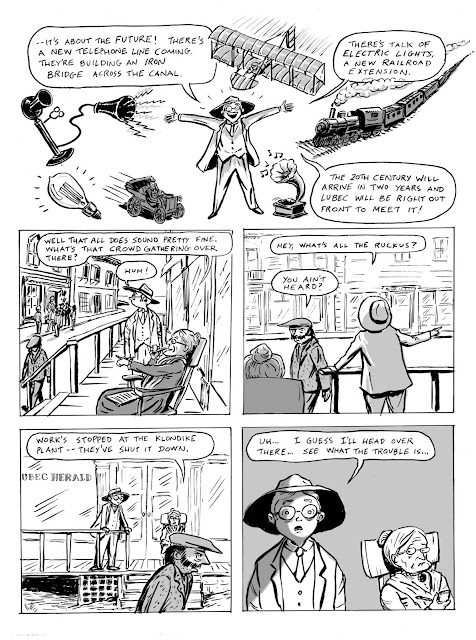 Mazur’s research and attention to detail in his art bring the story to life, placing the reader in this specific time and place. For those with a passion for this time period, it tickles that historical curiosity perfectly. Mazur has infused this story with heart, even though its subject matter opens up much darker territory.

As much as we like to think of the American character as idealistic and bright, we also know that so much of our history is dotted with people who prey upon this for their own gain.  The Jernegan Solution is a reminder of this and Mazur has brought this little known bit of history out of the depths and into the light at just the right time -- a time of presidential campaigns where we once again start thinking about the direction we want our country to go and who we believe will best take us there.


You can pick up a copy of The Jernegan Solution here.