I don’t know. I’m 10 years old or something (so many years ago) and somebody knew I loved comics so they handed me a reprint of some old Marvel tales and I stumbled across this and was enthralled. For me, Captain America has always been about this (from Joe Simon and Jack Kirby): 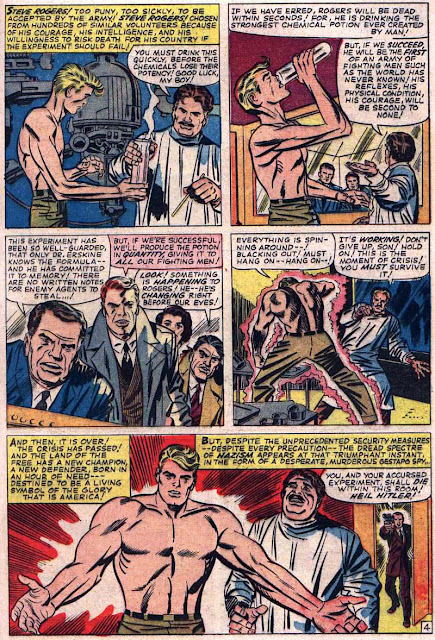 Every sentence on this page ends in an exclamation point! Everyone is shouting! Everyone is excited! It’s absolutely infectious! And there’s the mood ring environment pulsing from blue to brown to yellow to red, throbbing with excitement as well – the Pathetic Fallacy! Oh, and Steve Rodgers was so scrawny, so puny, so sickly (just look at the size of his waist), so ME – and then boom to buff, he glows, he glows!
“Daddy, why doesn’t Captain America have nipples like everyone else?” “Because he is America, son… AMERICA!”
Yes sir, this is truly America, isn’t it by golly, by gum – he’s our Captain America – created through science; he’s a Walking Testament to the Greatness of our Pharmaceutical Corporations Snuggled and Spooning in Bed with the Military Industrial Complex; he’s the first in what is to be an Army of Unstoppable Super Soldiers. How noble, how American! Damn right he doesn’t need no nipples!


But whatever — we live in cynical times now and it’s so easy to be cynical in them. This Simon/Kirby Cap was a symbol of whom we once thought ourselves to be. The one we could have been. The one we should have been. The one we, perhaps, still can be. This is Captain America and to a prepubescent boy trying to understand the world’s complexities he was a clear hero. He may have had no nipples, but he had no gray areas either.