What Is The Sound Of Both Hands Clapping: A Review of INKBRICK - A JOURNAL OF COMICS POETRY NUMBER 3 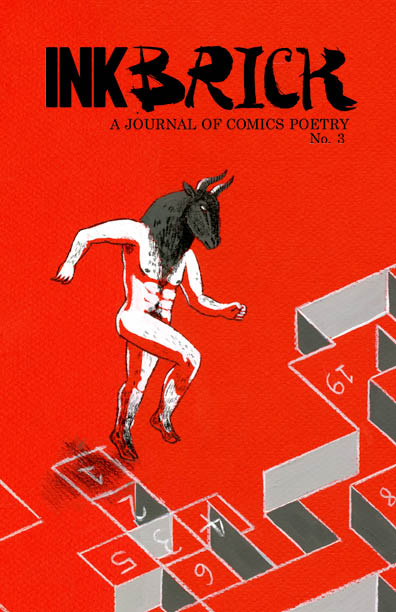 “You don’t read it. You don’t stare at it. You listen.” I wrote this when David Fairbanks, Keith Silva, and I reviewed InkBrick #2 for Loser City. It is how I understand what happens when an audience interacts with comics poetry. I still stand by this assertion and the recently released third volume of InkBrick bears this out even more.


Comics are typically at their best when words and pictures work in conjunction to express plot, character, setting, time, and action. Reading comics is a participatory act, as the reader takes in the information the artists have given him or her, and fashions the communication, makes meaning, understands story. Poetry works in different parts of the noggin. It paints in bright colors with thick brush strokes and asks its audience to feel more than think -- make meaning in the heart as much as the head.


Insomuch as they require an active engagement, both of these ways of comprehension are defensive acts. The mind and heart act as a bulwark against chaos, shaping it into understandable and comfortable bites of cognizance.


Comics poetry addresses the conversation between the parts of the brain that make both logical and emotional sense of the world. The typical actions in which a reader understands that which he or she is reading must be muted for a moment in the face of comics poetry. To fully engage with it, the reader must lower his or her defenses. Tear down the wall. Break them down. Allow for the chaos to supersede meaning just for a moment. Get uncomfortable, and then get quiet.


The comics poetry in InkBrick #3 have a lot to say.


InkBrick #3 shows an even stronger editorial hand than the previous issue. Alexander Rothman, Paul K. Tunis, Alexey Sokolin, Bianca Stone, and Gary Sullivan (all of whom, except Sullivan, have contributions in this issue) have once again culled and arranged an interesting cross-representation of the possibilities of comics poetry. While Rothman (“Play”) and Tunis’ (“Juniper”) contributions lean more towards the “comics” in the comic poetry axis, Sokolin’s contribution “Panopticon” leans more towards the “poetry” edge. Yet all three sit firmly in the experience of what is comics poetry.


Of the twenty contributors to InkBrick #3, though, a few really stand out:


One of the most impressive pieces is “The Shrine” by John Swogger.  According to the bio information provided in the back of InkBrick, Swogger is an archaeological illustrator who has also published work about Asperger syndrome and is currently working on a book about depression and eating disorders. Swogger says that “The Shrine” “is a poem-comic about my work as illustrator at the site of Catalhoyuk, and the visual relationship and interplay between my work there and the site’s visual legacy.” But it’s also a comics poem about the power of place and the effect it has on the individual. What is most interesting it communicates forcefully through what has been removed. It uses the style of a “blackout poem” and converses through redaction. What is unseen is part of the experience of the poem as much as what is presented. It would not stand as a comic, nor is it particularly powerful as a poem, but as comics poetry it is a work of art.


Catherine Bresner’s excerpt from “January 2nd” uses collage as her visual motif. Her crafted and manipulated images are, in effect, labeled with the words of her poem, each panel a piece unto itself, all merging into a greater whole that revels in a certain sad absurdity of resignation.


Likewise, Maëlle Doliveux’s piece “Tigridia Pavona” shrouds itself in despondency. A Tigridia Pavonia is an ornamental flower in the iris family that is known for having its blooms last only one day. Doliveux’s comics poem rests entirely on the conversation between the image and the words and its message of regret is hollow and quiet and suffocating.


The last contribution in the collection, “Rise/Fall” by Alyssa Berg, is also another instance of the singular aspect of communication inherent only in comics poetry. It is another quiet piece which demands its audience to open itself further than it would were it just approaching a comic or a poem.

If you are unfamiliar with comics poetry, InkBrick -- A Journal of Comics Poetry #3 is a good place to start. You can pick up a copy of it, as well as their previous editions, here.