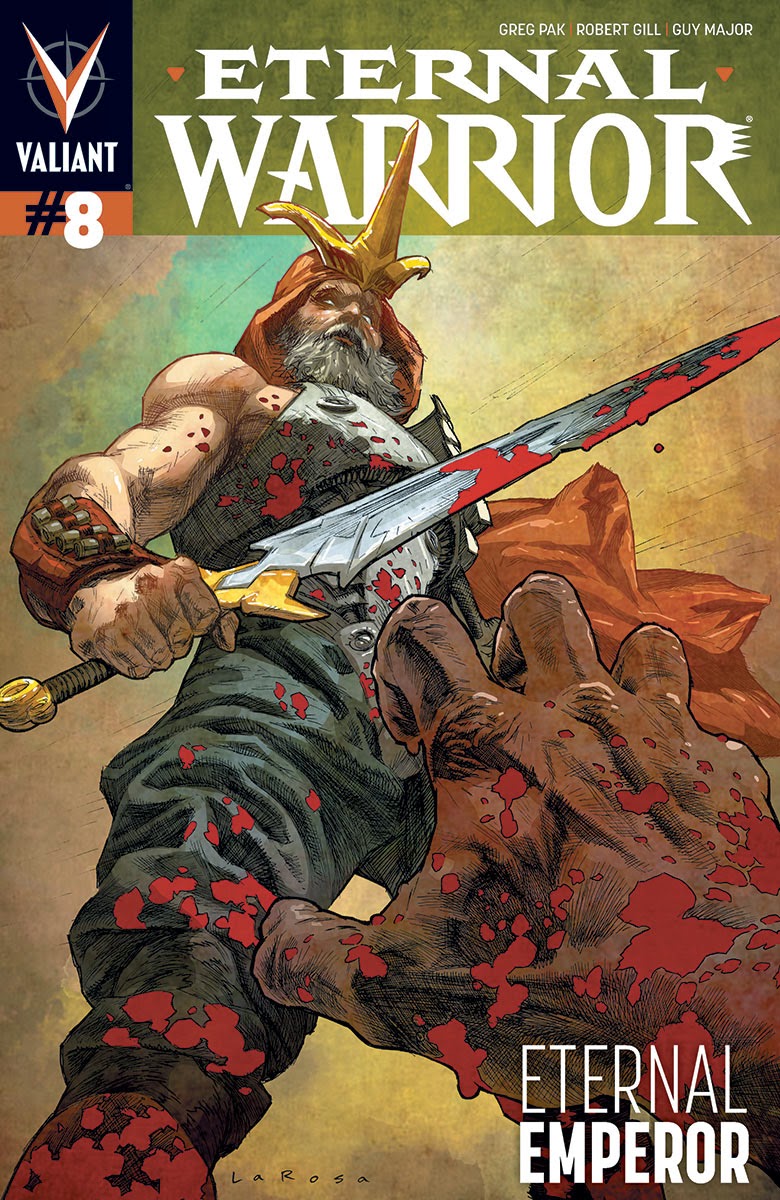 Elkin: Damn you, Greg Pak, you almost made me cry.
I like to think of myself as a relatively stoic sort, not prone to outbursts of emotion even on a subtle level, but Greg Pak'sEternal Warrior #8 has touched the blackened rubble that is my heart. This issue is the culmination of the Eternal Emperor arc that time jumped Gilad Anni-Padda into the year 4001 A.D. where he is the leader of a small, struggling village in the marshlands of Little Rock, and, more importantly, the protector of his granddaughter, Caroline.
This arc has all been pointing to its end, and the payoff in this issue is not where I thought it was going to go. Instead of a small tragedy, Pak turns this story into the human tragedy – that of the endless recurrence, mankind's fallibility. Pak is, in his way, telling us that the cycle of destruction is inevitable and, if you stick around long enough, you get to witness it happening again and again and again.
The first step in any act of human cruelty is when one group strips another group of their humanity. Early in this issue, Pak has the Eternal Warrior say, “I've seen people do the worst thing you could ever imagine, and then they go home, take a bath, and hug their babies. They're all people.” To which his granddaughter replies, “But … They're not US.” This is the moment in the story where it all turns, and artist Robert Gill steps up to the highest level, creating a quiet panel of Gilad touching his granddaughter's cheek. It is here the book starts to break me.

Gill's art is extraordinary in this issue. Ranging from those powerfully poignant quiet moments to the horror of genocide, Gill's pencils convey just the right amount of heft and import without being ham fisted or manipulative. Guy Major and John Rauch continue their use of a muddled palette that emphasizes the earthiness of what's occurring, connecting the horror with the inevitability of the sun rise. And Dave Sharpe once again shows that the work of a letterer can add a layer of emotional depth that no other aspect of comic craft can create.
But really, as great as all of the other creators have been during the Eternal Emperor arc, the highest praise still needs to go to Greg Pak. He's done a pretty amazing thing with this book. He's made me care. He's made me emotionally invest in the characters and what happens to them. And he's placed a truth on my table that, even though I knew and I knew and I've heard it before, became a whole new sour dish that, unfortunately, we all must feast from in the long run.
“She's just going to go there, isn't she? Like they always do, every single time.”
Eternal Warrior #8 is the kind of comic that you can give to your friends and say, “This. This is how comics can be great.”
Wunderlich: Right-o Elkin. I echo your sentiments through and through, but I’ll have to differ on one point.
Instead of fawning over Pak’s heavy, heavy story and Gill’s terrifically appropriate art (you’ve covered those bases and I couldn’t agree more) I’ll just highlight the one thing that disappointed me. Caroline. I know, I know…how, right?
The point Pak makes with Caroline is the center of everything the Eternal Emperor arc has been about. This final statement hits hard. It’s powerful stuff. I’m just not sure he earned it.
Gilad has spent much of this arc teaching Caroline about the world, human nature and so forth, yet when we get to those final pages I’m not sure I can sympathize. The message has weight, but the pessimism is all too glaring. The statement is bold and so perfectly executed it’s tempting to concede right away. Give it some thought though, take into account everything Pak and Gill have put together in this arc.
I’m trying not to spoil anything, because going over those final pages for the first time, I got it. I knew exactly what Pak was saying and was (much like Mr. Stoic up there) ready to take a deep breath and hold back my manly emotions. In retrospect, though, I want to yell at Gilad! His statements spell a melancholy end—and they don’t have to! May my ethereal arms pierce the fourth wall and shake this man to his senses, he knows better!

Still, this is a damn good issue. I don’t know if Pak earned his bittersweet ending, but it’s an emotional one nonetheless. This one will stay with me, that’s for sure.