Wunderlich: If Quantum and Woody is a pile of jokes with a story on top, Archer and Armstrong is the flipside. Fred Van Lente knows how to make us laugh but that isn’t his sole focus. A&A isn’t a sitcom, it’s action-adventure that just happens to be really, really funny when it wants to be. I love Armstrong with all his drunken, well-meaning wit. I love Archer and his constantly surprising action-hero moves. The problem with issue 19 is, I don’t love Bloodshot, I don’t care about H.A.R.D. Corps and the dynamic between A&A is entirely absent. 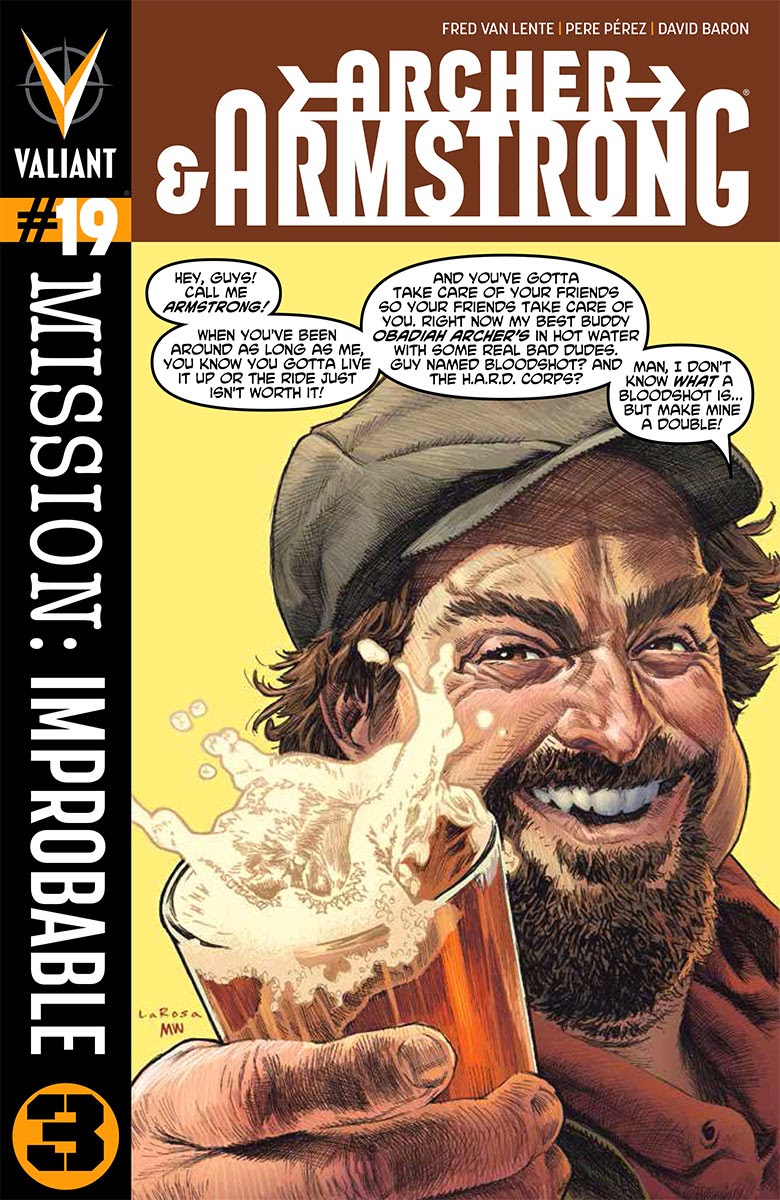 Starting in the middle of a cross-over is never a good idea. I haven’t read parts 1 or 2 of “Mission Improbable” (that’sA&A #18 and Bloodshot and H.A.R.D. Corps #20) so I’m already at a disadvantage. As always, Valiant’s recap page does an adequate job preparing the uninformed reader, but much of this issue relies on your disposition towards the characters. Like I said, I love Archer and Armstrong but I could care less about the other players.
It’s a sad admission, but page 1 was the best part of the book. Van Lente’s best creations--the Sect’s bizarre cadre of weirdos, are on full display. The opening is hilarious and weird and fun, but it all changes from there. The rest of the book follows Archer as he battles H.A.R.D. Corps and I must say, the fight scenes didn’t do much for me. Though Archer kicks all kinds of butt and proves why he’s such an awesome character, the rest of the cast don’t elevate to the same level.
I think the biggest problem here is the dialogue. It’s natural and suitable but often feels pointless. I can’t stand it when characters have to shout out the names of their powers as they use them (even if that is a necessary part of the story). When Archer and Armstrong are together, their dynamic alone can sell this book. The H.A.R.D. Corps have no such dynamic on display in these pages--their bickering seems forced. If you’re a fan of their book you may find much to enjoy here, but I was invested solely in the A&A team.

Pere Perez does his usual grand job bringing the book to life, but unfortunately his fight scenes aren’t in top form. His character work is terrific as always, but the settings don’t seem entirely fleshed out. Rooms are virtually empty, backgrounds dull and details negligible. It isn’t entirely Perez’s fault—the story takes place is a very uninteresting location, I just wish there was something to look at behind the characters.
Once this cross-over is finished I imagine A&A will be back in full force, as funny and exciting as ever. This issue, however, is a merely good book in an otherwise fantastic series.
Elkin: Damnit, Wunderlich, I hate it when you climb into my brain and steal all my words.
Your assessment of Archer and Armstrong #19 is pretty much dead on. And yet, as I am a wind-bag, I have just a bit more to add.

First, one thing you forgot to mention was the lettering work of Tom Long. I guess it says something about a comic when the thing you are most interested in is the craft of the letterer. Then again, it may say something even more about Long's artistry. Other than in the long expository section between Bloodshot and Veronica, Long's lettering is perhaps the most kinetic part of the book. From soft whispers to bold interjections, the dialogue lives through its conveyance. Grunts are grunted, sound effects howl, and you know when words are tossed in the air or broadcast through a speaker and it all looms large. Would Armstrong's mandate to BURN HIS PORN be half as funny if it weren't for the work of Tom Long? I think not, sir.... I think not.
The other thing you left out is that while this issue seems hurried – as if Van Lente is anxious to get to the highway of his story and begrudgingly has to drive through this mud puddle to get there first – there's a short back and forth in the middle of this book about the nature of faith that could lead to some larger themes later on. It comments on our modern conceptions of religion and, more importantly, religious people, and it certainly tweaked my interest. The line “Those who abuse the beliefs of others do not render those beliefs false” speaks large in this era of corrupt televangelists, child-molesting priests, and Fred Phelps. Given the context of this comic, too, it seems to be pointing towards something that Van Lente is trying to work out for himself.

I'm always excited when I see a writer using his or her art to better understand his or her own thinking about things. It indicates he or she trusts the reader, that the reader probably has these same sorts of questions, and as the reader reading the text also reads him or herself, the circle of thinking is drawn tighter, and, perhaps, we are all the better for the experience.
You gotta hand it to a publisher like Valiant that will allow a writer to use their corporate properties to have these sorts of conversations with their readership. I guess that's why, even though I pretty much am done reading superhero comics, I'm still so drawn to these books.
Still, like you, I can't wait to get the mud off the tires here and see this story start racing again.