Poets You Should Know -- Michael Benedikt 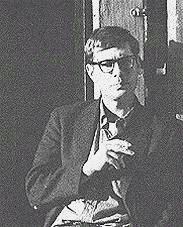 Michael Benedikt was born in 1935 in New York City. He received his B.A. from New York University and earned a Master's Degree in English & Comparative Literature from Columbia University. He was an Editorial Assistant for Horizon Press from 1959 to 1962, and in 1963-64 served as Managing Editor for the literary magazine Locus Solus.

Prior to publishing his first collection of poetry, Benedikt co-edited three anthologies of 20th-Century Poetic Theatre from abroad: Modern French Theatre: The Avant-Garde, Dada, & Surrealism (1964); Post-War German Theatre (1966) and Modern Spanish Theatre (1967). His anthology of twentieth-century American plays, Theatre Experiment, was issued in 1968. He is also the editor of two landmark anthologies of twentieth-century poetry: The Poetry of Surrealism (1974); and The Prose Poem: An International Anthology (1976). A critical Festschrift, Benedikt: A Profile was issued by Grilled Flowers Press in 1978. Benedikt was Poetry Editor for The Paris Review from 1975 to 1978. His editorial selections are represented in The Paris Review Anthology (1990). Occasionally active as a critic/journalist, he is also a former Associate Editor of Art News and Art International. His literary criticism has appeared in Poetry and The American Book Review.

Michael Benedikt's books of poetry include The Badminton at Great Barrington; or, Gustave Mahler & The Chattanooga Choo-Choo (University of Pittsburgh Press, 1980), Night Cries (prose poems, 1976), Mole Notes (prose poems, 1971), Sky (1970), and The Body (1968). Poems as yet uncollected in book form have appeared in the 1990's in such literary magazines as Agni, Iowa Review, Michigan Quarterly Review, The New Republic, The Paris Review, and Partisan Review. His honors include a New York State Council for The Arts Grant, a Guggenheim Foundation Fellowship, and an NEA Fellowship. He has taught at Bennington, Sarah Lawrence, Vassar, and Hampshire Colleges; and at Boston University. Michael Benedikt died on February 9, 2007.


THE TOYMAKER GLOOMY BUT THEN AGAIN SOMETIMES HAPPY


(1) How can a person practically drowning in our usual, daily, dirty, diurnal dreck possibly attempt to engage, full-time, in the production of Magical objects? That is a simple question which, I imagine, virtually every person who prides himself on being both a serious craftsperson and a good citizen of our ordinary, everyday world must, after all, ask himself or herself every now and then. Good heavens!—just try waking up first thing in the morning with a few nice, clear Visions of Bliss in your head, and then try perambulating just a few blocks beyond the relative safety and calm of your own house or apartment—and see how long your otherwise probably quite cheery, creative early-morning attitude survives even that little stroll into madness and disorder! Yes, if only as a form of mental exercise, just try calculating the exact effect that even your very first everyday encounters with the external world and the people in it, exert upon you and your early-morning psyche and disposition—and see then whether you feel like going around all day long, thinking playful, creative thoughts, chuckling pleasantly to yourself, and generally smiling and laughing! (2) I don't know how you feel about it, but for years and years, particularly from the point of view of a person practicing our own, would-be benignly optimistic profession—that of struggling Manufacturers of colorful and sometimes even relatively amusing toys—I've felt that this constant placing of myself into bad moods by the conventional world, practically amounts to theft! Theft of my good moods, theft of my creative, inventive capacities—theft of my peace-of-mind! Don't you, yourself, think that most of us spend a whole lot more time than we should have to, defending ourselves against the incursions of a virtual slew of tedious mentalities, intent on slipping themselves into our mental or even actual billfolds? (3) Still, we press on! As devoted Toymakers, of course, we must! The children, after all, want to be entertained! The public is practically crying out for novelty! (4) And besides, there is at least one additional reason to press on: It must be admitted—must it not?—that we ourselves sometimes get miserably bored...! And so, occasionally (sometimes when we least expect it!),we feel the sudden need to try to produce, in counter-response, a pretty doll with eyes sharp and bright enough to light up the world; or, sometimes, a stuffed teddy-bear which sings whimsical tunes— and which, every now & then, sometimes even dances....