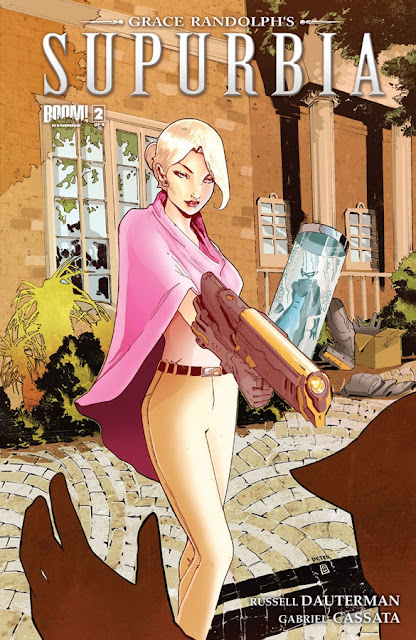 Jamil: And we're back! The Supurbia Tag-Team Review-a-palooza Version 2.0 starring Dan and Jamil. In case you missed it, our unstoppable duo reviewed the Supurbia debut last month, and now we turn to issue numero dos, which creator Grace Randolph personally promised would rock our socks.

In case you missed the big news Daniel, this series was promoted to ongoing status after just one issue. I was going to compare that to a band getting a record deal after one good show, or a TV show having a full season ordered after a solid pilot, but I guess those are totally plausible scenarios, so maybe that's not the best comparison.

Daniel: That is big news and congratulations to Grace Randolph and crew for going ongoing. I guess I have to wait to see where this goes.
So, issue number two. Grace Randolph did promise it would knock our socks off, but, to be honest Jamil, I'm still wearing shoes. As this was originally supposed to be a four-issue mini, I expected the plot to have advanced a bit further than it has. Right now it seems that things are still in the "setting-up for something" stage. The characters haven't advanced any in their development, nor has there been any real big plot beats covered.
I guess I am still waiting here, and my shoes are starting to feel a little tight. 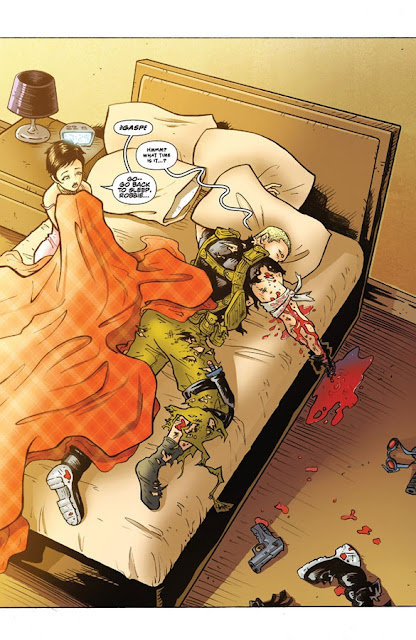 Jamil: If this was still a four-issue limited I think I would be seriously questioning the direction of the overall plot/vision. There is definitely a lot of "stage-settling" here, and it feels stagnant. The issue begins by introducing the characters the premiere couldn't fit, like the Comic Champion family, and partners (that's two times) Night Fox and Agent Twilight. Most of the major players show up, but there is no cohesive narrative throughout the issue. It's just character moment after character moment, with a couple of minor plot develops that still don't tell us much about the double-agent antagonist. Where is the principal action? What direction am I supposed to be looking? The spouses? The kids? The team?
The series is about setting up tropes and clichés and then breaking them in two, but right now the comic is in some type of limbo between playful satire and taking itself seriously.
Daniel: "Limbo" is the perfect word for what's going on here, which, for all intents and purposes, is nothing. I wonder if Randolph got the nod to go ongoing before this issue came out and decided that, if this was indeed true, she had room to start padding while she figured out how multiple arcs of this title would play out?
I really am disappointed, Jamil, as I started to get caught up in your initial enthusiasm and Randolph's promises of something new and exciting headed down the pike. Issue number two was kind of the proverbial "buzzkill."
At least the art is nice, huh?
Jamil: Yes, Dauterman improved from last issue; his layouts and rendition of the characters look a lot more polished. As with the story's tone, this book's visuals occupy a weird space between serious and silly, and a settled look could be hard to achieve. The art team is getting closer, though. The script so far has been light on action, and that plays into the subject matter, but scenes like Eli secret spear-throwing the last page splash carry a lot energy for the style. I also thought the cover didn't misrepresent the comic as much as the first one did. 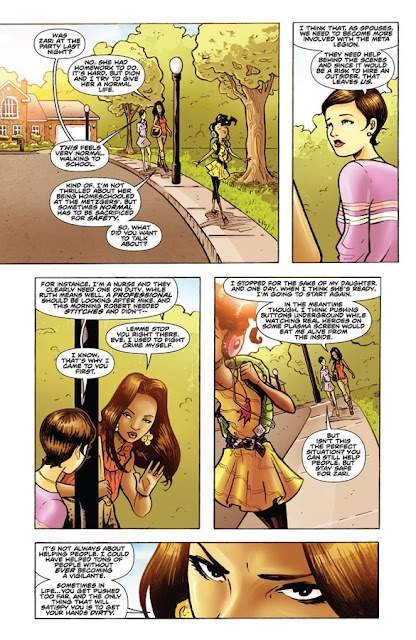 Daniel: It's kind of sad when one of the best things you can say in a review of a new book is "the cover didn't misrepresent the comic as much as the first one did." But that is kind of where we're at with issue number two of Supurbia, I guess.
I'm going to be optimistic, though, which is a departure for me. Based on the fact that Image has decided that this is a property that has some legs, I'm going to forgive issue two as a necessary evil (well, "evil" is probably too strong of a word). I'm going to assume that Grace Randolph and crew have carefully put this issue out in order for everything to be perfectly in place for one of the most amazing, jaw-dropping, unbelievably inventive, brain bending stories I've ever come across in comics. Issue three is going to make me start screaming from the roof-tops, "YOU MUST READ SUPURBIA!"
I can't wait to read it....
Jamil: I think Image just found their new solicit writer!
It's still an interesting comic, and there are no major logic fails that could deflate my enthusiasm still lingering from the first installment. A few legit smile-worthy moments sprinkle the issue, like Sovereign's interactions with Hella Heart and Night Fox, and Mike's surprise return. However, the colloquial, everyday-people atmosphere failed to excite here. Walking the kids to school is still just walking the kids to school, even with superpowers in the mix.
If Supurbia #2 is about positioning then so be it. With its newly minted status of ongoing it gets a pass, but something better happen quick. Right how this is just a high-concept premise, and we're looking for a story.