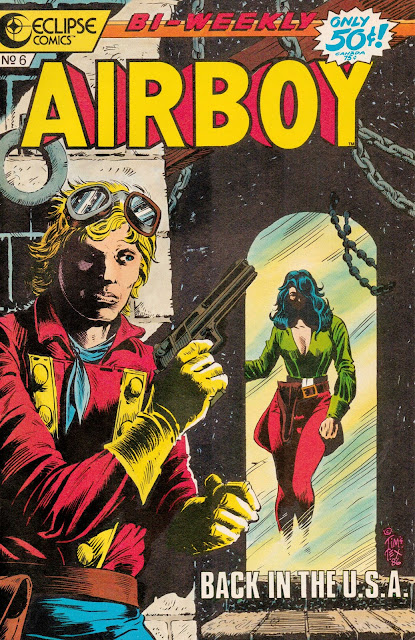 It saw the release of the movies River's Edge, Blue Velvet, and Down by Law.

The music was great in September of 1986, highlighted by the album releases of Love and Rockets' Express, Billy Bragg's Talking with the Taxman about Poetry, and Skinny Puppy's Mind: The Perpetual Intercourse.

Sure they canceled The Love Boat, but on the television, national audiences were treated to the premieres of ALF, Matlock, The Oprah Winfrey Show, and It's Garry Shandling's Show.

September of 1986 was a time of creativity and experimentation, love and politics. Into this mix, Eclipse Comics was in the midst of trying a new publishing idea – a bi-weekly comic book for only 50 cents. That comic? Airboy. And issue #6 of this series came out on September 23rd.
The Airboy franchise has been around since 1942. The character was first published by Hillman Periodicals and was created by writers Charles Biro and Dick Wood and the artist Al Camy.

According to my go-to source on these sorts of things:

The first Airboy was David ("Davy") Nelson II, the son of an expert pilot and, despite his youth, a crack flyer himself. His friend, inventor and Franciscan monk Brother Francis Martier, had created a highly maneuverable prototype aircraft that flew by flapping its wings, like a bird. Martier, however, was killed while testing it, and Davy inherited both the plane and a uniform, which had apparently been in Martier's family since the French Revolution. Davy soon christened himself "Airboy", and in his seemingly sentient new plane, "Birdie", helped the Allies during World War II. Airboy confronted such weird antagonists as intelligent rats, the mysterious Misery – whose Airtomb imprisoned the souls of dead pilots – and his cleavage-baring Nazi archnemesis, Valkyrie, a German aviatrix who later became his ally.

After the conclusion of World War II, David Nelson II continued to work as a freelance pilot and mercenary for a time, but he eventually retired from combat flying and stored Birdie in a barn outside his California estate. He had a son, whom he named David Nelson III, and founded an aircraft manufacturing company, through which he became very wealthy. In the mid-1980s, David Nelson II was assassinated by mercenaries from the South American nation of Bogantilla. When David Nelson III discovered that his father had been assassinated, he began to investigate the circumstances which had led up to his father's death. He soon discovered his father's mothballed plane and uniform and teamed up with a number of the surviving Air Fighters to face many of the same enemies as David Nelson II, as well as South American dictators, Soviets, pirates and corporate criminals.

Now that's a back story.

Before I go any further into this comic book, I need to be upfront with you about something. I'm no fan of flying. There is something about traveling miles above the ground at a very high rate of speed in a self-contained metal tube with a bunch of fat men who smell vaguely of cheese that unnerves me on a profoundly fundamental level.

I'm also not a big fan of war, genocide, or overpriced burritos, none of which have anything to do with this comic. A matter of fact, for a comic book called Airboy, there is surprisingly little flying in this book. A matter of fact, there is no flying. What there is, though, is some mildly complex character development, stage setting for future conflict, a robot with an off switch, and a naked guy in the desert.

So it has that going for it.

The book opens with this rather lush page: 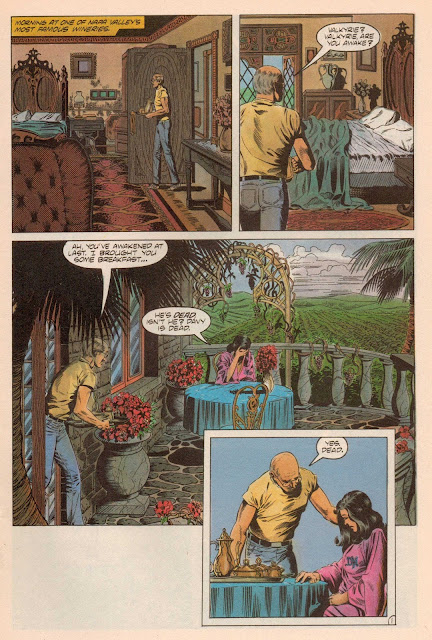 What follows is an great deal of exposition laying out what has happened previously, who these characters are, and why we as an audience should care. Dixon does a great job with this and, in a few short panels, sets me comfortably in the world of this comic (something all comic book creators should be doing, by the way). 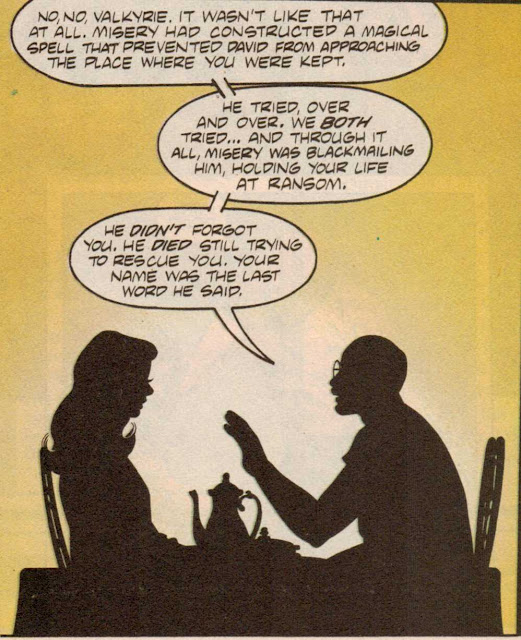 It's all certainly compressed, but there is an emotional resonance to the story so far which Woch's art does a great job of complementing. In these few panels, Valkyrie's sense of loss is palpable, as is her confusion and her sense of isolation. While she was under Misery's sleep spell, the man she loved died, she subsequently discovers that he had been married and had a son, that he gave up flying to become a vintner, and that she has been asleep for so long she doesn't even know who the President of the U.S. is anymore.

The comic then cuts to David Nelson III in his father's basement, looking through memorabilia. 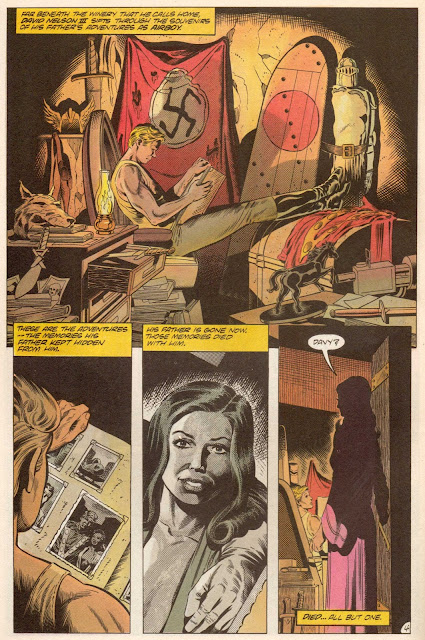 So Davy is looking at pictures of his dad with his arms around a lady who is not his mom. This lady is in his house now, and she looks exactly the same as she did in the picture. Seemingly wearing the same outfit even.

And then she enters the room. 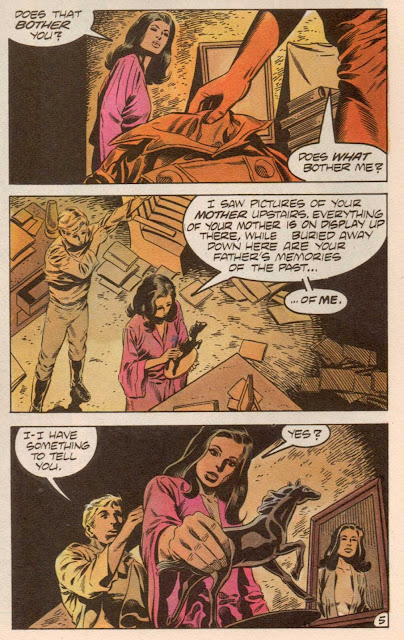 From here, things start to get a little ... shall we say … uncomfortable. This scene seems to be going all Oedipus on us, doesn't it? And turning the page doesn't help: 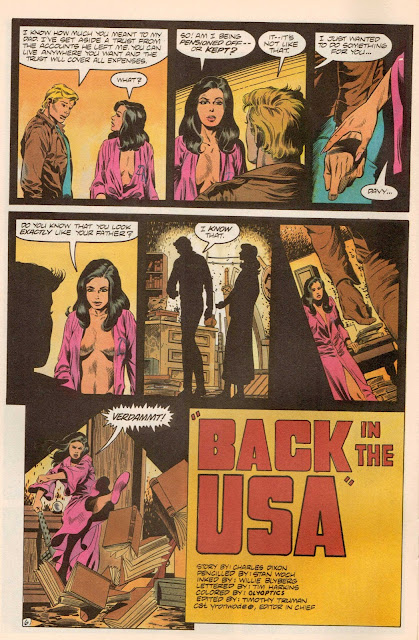 I guess I understand that these characters are confused and mildly desperate because of what has happened to them, but this kind of tension can't be healthy for either one of them. And that last panel of her kicking books, cursing in German, and having her fist that close to an automatic rifle has all these Freudian overtones that no amount of therapy could ever really cleanse one's head of.

After a highly charged scene like that, Dixon provides us with the a palate cleanse that can only be found in a robot with a sword.

Down in the basement, “among the machines,” is a robot with the brain of “Nelson Aviation's Greatest Test Pilot” who was the good friend of the original Airboy. He is having a sword training session with Hirota, the kind gentleman who was talking with Valkyrie on the first few pages. The robot is expressing his sadness for the passing of his friend while declaring that he has no desire to meet that man's son. Hirota points out how selfish this stance is. 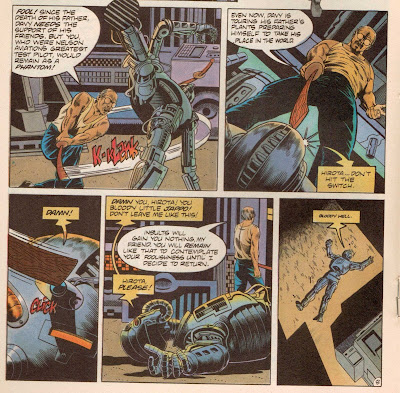 I am not sure why a self-aware robot would have an off switch right in the middle of his fucking head, but then again, what do I know about robots? I really like the way Dixon and Woch did the pacing on this scene, and I especially like the last panel.

The comic then jumps to outside of Bakersfield.* Davy is inspecting his father's business holdings now that he has been left in charge of the corporation. Here he meets Emil Kronenberg, the Head of Corporate Operations, who's obviously got some bodies hidden somewhere, probably next to all the skeletons in his closets, and is none too happy about young Davy poking around the corporate structure. I have a distinct feeling this is a plot point that Dixon will return to in the near future.

But for now, this comic needs a naked dude. 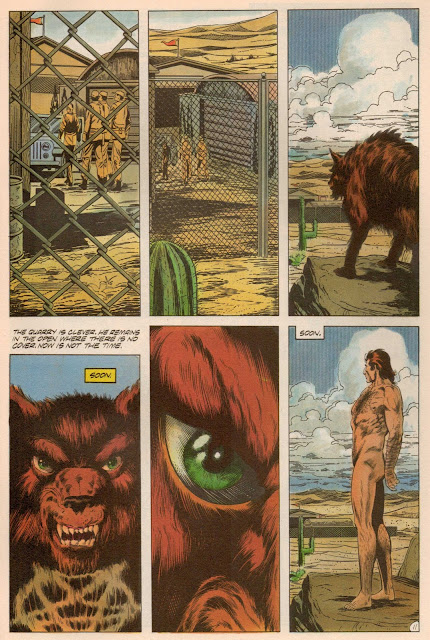 I honestly have no idea what this is about, but it certainly is nothing I was expecting. There's kind of a weird perspective on the guy, too, right? It's like he really want to show you his junk, but someone won't let him, so he is getting as close to it as he possibly can just to fuck around.

I'm sure this is a plot point that Dixon will come back to in future issues. I really, really, really hope he comes back to this in future issue. If he doesn't, then we've got a really fucked up kinda Gerber's “Elf With A Gun” situation here. And I don't even want to begin to think about the ramifications of that.

So I'll turn the page.

Valkyrie has moved across the country to begin a new life, and she's doing it in some pretty swanky style, living penthouse large. Her new neighbor has let herself in and decides that she is going to plan a party for Valkyrie. She begins sorting out a guest list as Valkyrie opens a crate full of … ummmm.... automatic weapons.

A guess a young single girl in the big city can always use a little protection????

Anyway, the neighbor finds a picture among Valkyrie's stuff and then this happens: 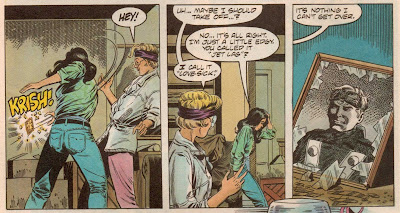 And that's how the comic ends. Boom. “It's nothing I can't get over.”

So, then, that's Airboy. You got 13 pages of comic book bi-weekly for fifty cents. Not a bad deal.

And hey, it's value held up, too. I mean, I paid fifty cents for it in 2012 – and I would do it again. This was a fun little tale ripe with good writing, good art, and a lot of places it can go in terms of plot.

I mean, it's not an earth-shaking revelatory masterpiece or anything. Sure you could plumb some depths about the weird Oedipal and Freudian nature of parts of the story, and you could maybe write a few dissertation pages on the social-political ramifications of the symbolism represented by a robot with a human brain that would consent to an off switch on his forehead, and there could be some fodder for an overly intellectualized conversation about the imagery of naked wolf-dudes in the desert and its relationship with the philosophy of Carlos Castaneda, but that's not what this column is about.

This column is about comic book version of dumpster diving. Mostly you get covered in some gawd-awful fetid and rotten garbage, sometimes you find that diamond jewelry that Grandma had forgotten she put in the shoebox the movers just threw away, and sometimes you find kind of a nice sweater that just needs a little cleaning and a button or two that you can wear the next day.

I think Airboy #6 is that sweater, but, then again, I have become totally lost in the metaphor. Maybe it's the button? Or cake? Cake is good.

*For some reason, Stephen Bishop's song, “On and On” just jumped into my head after I typed that sentence. I have no idea why, as it has nothing to do with anything in that sentence. I just thought I would share that.