Random Pulls from the Bargain Bin
This Column originally ran on COMICS BULLETIN
In these economic times, finding inexpensive entertainment is difficult. Thank goodness for the local comic shop and a slew of comics nobody cares about anymore! Each week Daniel Elkin randomly grabs a comic from the bargain bin (for 50 cents) to see what kind of bang he can get for his two-bits. These are those tales. 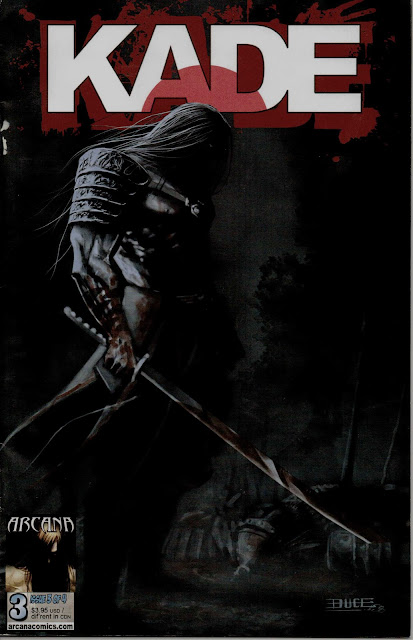 THE SAVAGES SPEAK THE LANGUAGE OF BRUTALITY. I SCREAM IT.
July 2009. It was only two years ago, but doesn’t it seem so much longer than that? It was only two years ago that there was that televised memorial for Michael Jackson, there was that really long total solar eclipse, Karl Malden died, and Harry Potter and the Half-Blood Prince opened in theaters (so did Bruno, but the less we say about that the better). In July 2009, the Sci Fi Channel became Syfy, Madonna was performing on her Sticky and Sweet Tour, and Tool was back doing shows after a two year hiatus.

July 2009 also saw the release of Arcana’s Kade: Rising Sun #3. This was the third installment of a four part mini-series featuring the immortal demon hunter Kade. I found it in the bargain bin.

Why it was in the bargain bin, though, completely eludes me, because this is a pretty good comic.

Kade: Rising Sun #3 opens onto action peppered with musings on how a warrior understands battle. 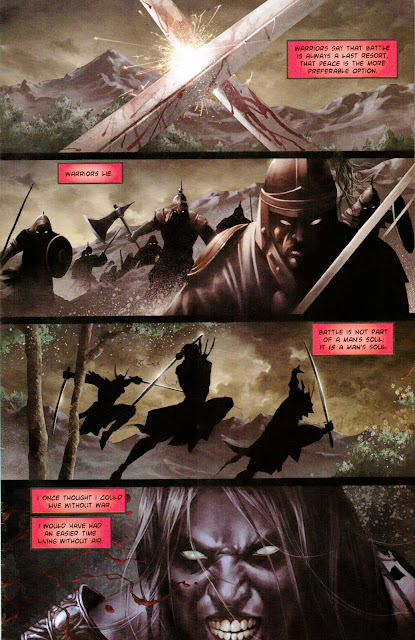 According to Kade, “Battle is not part of man’s soul; it is a man’s soul.” While this may be an oversimplification of a very complex concept, it is pithy enough to cause me to pause, it is concise enough to send me into a momentary reverie on the nature of man. Is this true? Are we, as men, fundamentally predisposed to violence? Is our veneer of civilization a hindrance to our self-actualization?

These are core questions that I unavoidably had to confront from reading the very first page of this comic (and, unfortunately, remain answerless). That’s a good sign, right?

The question remains, though, will the comic be able to keep up this pace? Or will it burn out after igniting so brightly?

The next couple of pages are filled with a battle between a Mongol horde and Kade and his group of samurai. I quickly surmise that this comic is taking place in feudal Japan. I appreciate that the writers of this comic showed me enough respect by giving me just enough information for me to be able to figure this out on my own. I appreciate that they didn’t place some garish yellow text box in a corner of the page spelling this out.

Things are looking good for this book. 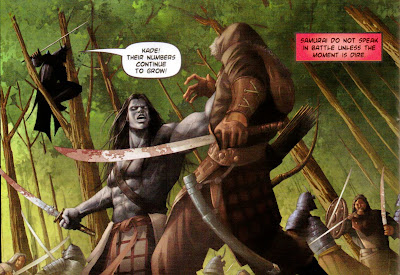 The action continues and Kade waxes philosophically on the nature of the samurai, the political organization of the Mongols, the rules of warfare, and his own army’s chances against the Mongols. It’s all done in voice-over text boxes, but it never comes off heavy handed or smacks me in the face as being overly didactic. A matter of fact, it’s interesting, it’s conversational, it helps to characterize Kade, and it further affirms the fact that the authors of this book trust their readers.

This comic is seeming more and more like a warm tub in which I can recline, cocktail in hand, as some sweet saucy jazz simmers on the speakers. I am comfortable in Kade. I like what I am reading.

In the comic, the Mongols retreat to regroup and wait out the night. Kade tells his samurai that they must tell their lord what they have encountered and what he thinks they should do next.

Kade proclaims to Lord Kinsabe that the only victorious course is to evacuate and leave the city to the Mongols. He feels further battle is futile and that retreat is the humane solution. Lord Kinsabe finally acquiesces to Kane’s wisdom in this matter.

I’d like to take a moment here to talk about Christian Duce’s art. While inconsistent and muddy at times, moments, like the panel above, near transcendence. This panel’s art conveys the character of Lord Kinsabe completely through his eyes. There is depth here. It’s kind of staggering. And I pulled this comic out of the bargain bin.

Until I read Kade, I never heard of Christian Duce. He has recently been doing the art on Flashpoint: Lois Lane and the Resistance. I think I should probably check that out. It’s funny where the bargain bin leads sometimes.

But back to Kade. Lord Kinsabe decides it would be best to march his evacuated town to the Emperor, because “turning loose an entire town in the province of the Emperor will create the finest kind of chaos.” The Emperor is seen as a demon, and Lord Kinsabe has some dreams of, perhaps, taking his place.

Kinsabe orders his town burned after it is evacuated. 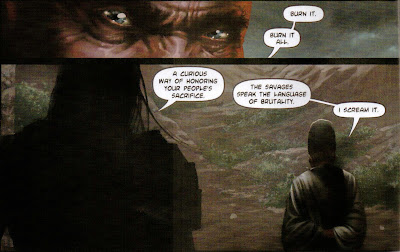 Once again, Duce’s art shines in the eyes. I especially love Kisabe’s line, “The savages speak the language of brutality. I scream it.” Now that’s how you use good writing to further character development. Personally, I’m thinking of adding this tag line to my business cards.

Kade leads the townsfolk on their long march towards the Emperor’s province. During this march, Kade begins to show his interest in a particular non-Japanese looking red-headed hottie named Misuno. 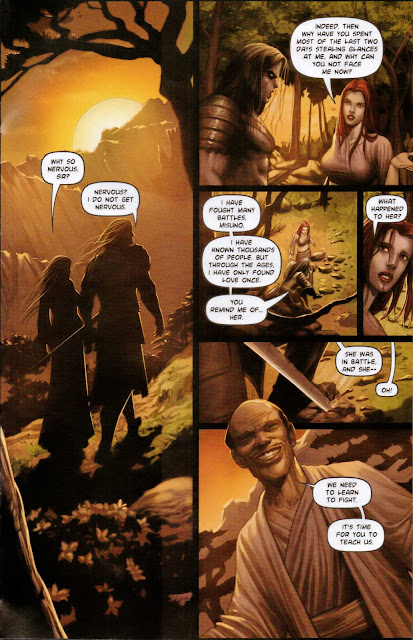 Misuno reminds Kade of his past love. The sexual tension between the two starts to rise a bit (the whole sword plunging into the earth? Subtle, guys), but they are interrupted by some smiling mustachioed man who wants Kade to teach him how to fight.

Then there’s this scene: 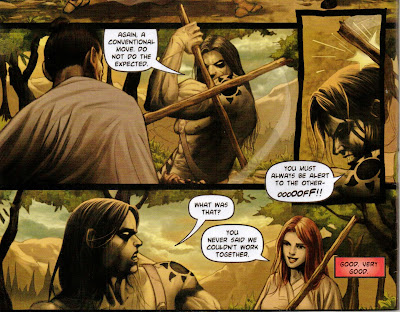 Cute. You can see what I mean by Duce’s inconsistency here, though. Kade looks like he is about 13 years old in the bottom panel.

Anyway, Kade and the townspeople make it to the Emperor’s province and they are suitably impressed by its grandeur. Just as they enter, though, Kade is wracked with staggering pain in his gut; it is the pain he feels whenever he is near to a demonic presence. I get that sometimes too, but only after I’ve eaten an El Pastor Super Burrito at my local Taqueria. There must be a lot of Demons working there.

Kade is convinced. His “Demon Sense” PROVES that the Emperor is, in fact, a demon; he certainly is one fat fuck. Kade wastes no time acting on his Demon Hunch Thing and, without much thought, takes “Things” into his own hands. 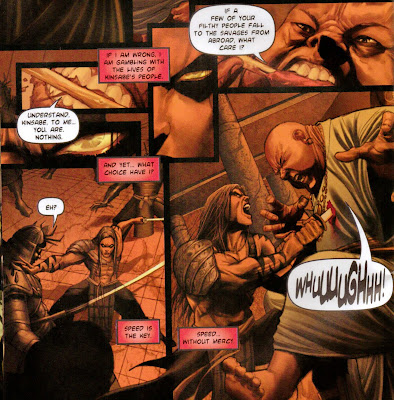 Kade certainly gets his “Point” across.

Sorry. I had to do that.

As a result of Kade’s actions, the Emperor’s guards are compelled to act. Kade then gets to swing his sword -- through the necks of seven or eight guys and give Duce the opportunity to dip into that red ink (literally).

Lord Kinsabe is taken aback by Kade’s rashness. While applauding the outcome, he is unsure as to why Kade went all brutal so quickly. Kade assures Kinsabe that the Emperor was a Demon, and proceeds to try to prove it. To do so, Kade must carve the name of the Demon onto the Emperor’s chest, as this banishes the Demon (of course). Kade decides that the Demon’s name is Shai’tse (because it has an apostrophe?), and uses his sword to write the name.

Unfortunately, nothing happens. Kinsabe quips, “Perhaps you spelled it wrong?” Kade wonders if, by chance, the demon’s name has changed. Then he has a “sharp” realization: 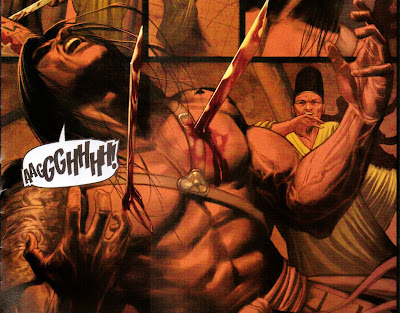 The last page is the big reveal. The Demon in question was not the Emperor after all (oops). The Demon is, in fact, Kade’s lady interest, Misuno! Misuno, we learn, is the reincarnation of Kade’s former lover, Erza. 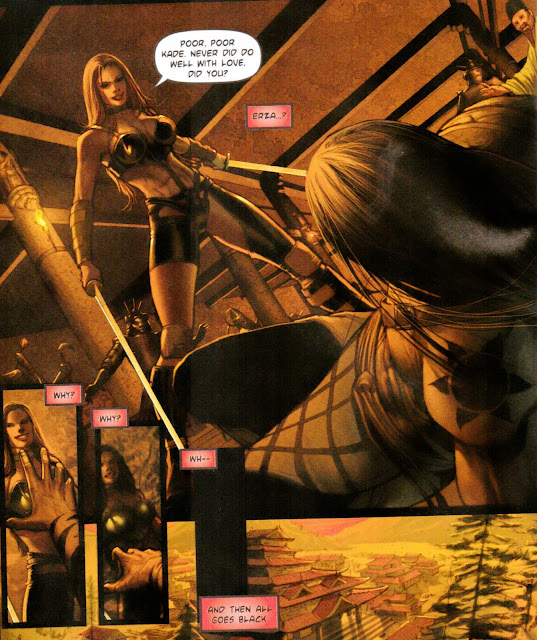 I sure as heck didn’t expect Kade: Rising Sun #3 to get all Shyamalan suddenly!

It’s a nice twist -- not wholly original, but fun. It’s also a pretty good cliffhanger, and it peaked my interest enough to want to read the entire series.

All in all, this was a satisfying comic to read. The writers treated me with respect, the art had moments of brilliance, my brain was fed enough questions to keep it from being distracted by shiny things, the story moved right along, and even though it was the third installment of a four part mini-series, I never felt lost while reading it.

Was Kade: Rising Sun #3 worth the fifty cents I paid for it? Absolutely. A matter of fact, if I could ever scrape together any real disposable income, I’d be inclined to purchase the entire four issue series.

Still, you know what I liked the most about Kade: Rising Sun #3? It wasn’t X-Force #20. I still hate that thing.