SEE THIS MOVIE! You're Gonna Miss Me

Sometimes the most universal truths can be found in the smallest slices of life.  That’s what makes independent documentaries so powerful, engaging, and entertaining.  Not only do they show you little worlds to which you’ve never had access, but they oftentimes also tell the larger story of what it means to be human. 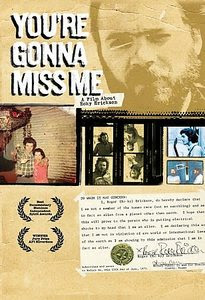 You’re Gonna Miss Me is a documentary about Roky Erickson, “the great lost vocalist of rock and roll.” Roky was the lead singer and charismatic front man for the pioneering psychedelic rock band The 13th Floor Elevators. He was an absolute force to be reckoned with in the mid to late 60’s until his life turned completely upside-down due to his mental instability.

The film begins with a moment from the court proceedings in which Roky’s youngest brother, Sumner, is trying to wrest guardianship of Roky away from his mother, Evelyn. During the proceedings, there is an intimation that the last 35 years of Roky’s life has been filled with tragedy.

The film then cuts to the 1966 performance of the 13th Floor Elevators on the Dick Clark show. Roky is bent over his guitar and he is singing their hit song, You’re Gonna Miss Me. Roky’s voice is a one/two punch of visceral howling and moaning and the performance is absolutely captivating. You get the sense right away that this young man with his guitar is someone you need to sit up and take notice of. Here was a young man who was going to shake up the music industry. 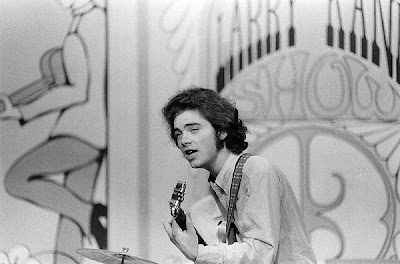 As the performance fades out, the film then cuts to July, 1999. An overweight, unshaven, dirty looking man with fingernails desperately in need of trimming is going through the Publisher’s Clearing House mailer with glee and intensity. Then he is captivated by an old, faceless Mr. Potato-Head. It only takes a moment for you to realize that this broken man is the same person as the vibrant rock god performing in the earlier black and white clip. 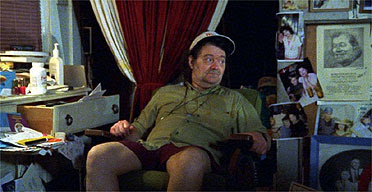 The juxtaposition is shocking and you are left asking how this happened? In thirty-five years, what brought this man down?

This juxtaposition is one of the devices that director Keven McAlester uses throughout the film to emphasize what could have been, compared to what is. And it’s powerful stuff.

The documentary lets the participants tell this story with no judgments whatsoever. It does a great job of telling the history of this man in all of his incarnations, as well as exploring family dynamics and mental health issues.

At no point does the film draw any conclusions as to whether or not Roky’s mental issues were a result of his spectacular drug use or a natural result of his enormously dysfunctional family dynamics. The film just presents the people and the moments as they were and as they are, letting you, as an audience member, decide for yourself what to think.

And this is a tragedy, don’t get me wrong. The squalor in which Roky is living later in his life is horrendous. His mental illness is obviously debilitating (in order to rest, he blasts TV’s and radios and synthesizers in this tremendous cacophony in order to quiet the noises in his head), and he cannot care for himself. His mother is well-intentioned in trying to help him, but she appears to have a number of her own issues that are preventing her from providing any meaningful assistance.

Roky’s younger brother steps in to try to help Rocky and this leads to even more questions about motivation, family dynamics, and mental illness. Everyone in this film is broken and watching it is painful at times.

But the film is captivating, not only because of its “story,” but also because of its humanity. It brings up some very fundamental questions. How can love make things go so wrong? What is the difference between artistic idiosyncrasy and true mental illness? How far are we all from the abyss? What is the nature of genius? How do we as a society respond to the insane? What are our responsibilities to our family?

These are heavy questions, and You’re Gonna Miss Me provides you with no answers. While the film does end on a relatively redemptive note, even that note chimes a little flat.

highly recommend that you see this film. Lee Daniel provides some beautiful cinematography, the archival footage and photos are great to see, and the humanity of Roky and his family are so much in front of you throughout the entire film that you can’t help but reflect on your own.