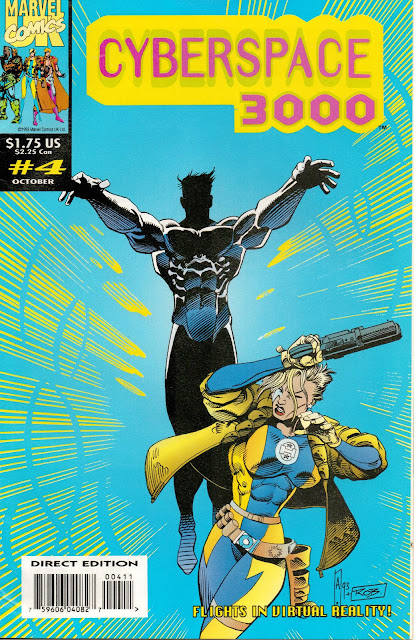 I AM YOUR SALVATION. OR YOUR DAMNATION. PLEASE FEEL FREE TO TRY AND KILL ME…
October of 1993 was truly an evil time in the world. China performed a nuclear test, singlehandedly ending a worldwide de facto moratorium. Three members of the UDA killed eight people and wounded thirteen in a bar in Greysteel, Northern Ireland. The South Korean ferry Seohae capsizes and kills 292 people. The Crash Test Dummies vomit up the album God Shuffled His Feet, spawning the eventual pop chart domination of “Mmm Mmm Mmm Mmm.” The movie Cool Runnings is unleashed on theaters. Then Marvel Comics UK pour gasoline on this human fat fire of a month and spews forth Cyberspace 3000 #4 into comic shops.

Sometimes writing about comics is hard. Sometimes it even hurts. This is one of those times.

I have previously admitted to the fact that I pretty much stopped reading all Marvel Comics in the 90’s. This comic is a perfect example of why that was. Put down whatever it is you are eating, maybe pour yourself a drink, and get ready.

The comic begins as so many do, with a splash page. Normally a splash page has some dynamism to it. The first page of a comic should really engage the reader and draw them in to the rest of the story. As you can see above, that does not happen in this comic.

What we have instead is a posing lady with a gun. Her name is Jennifer Cabre-Rios and she, according to the text box, is “ready for action.” I’m not sure what sort of action they are referring to. And how the hell is she standing on those toothpick legs anyway?

The next text box on the page tells us that “She’s looking for someone. She hope she finds him.” This is powerful writing, huh? Talk about exciting. Weee.

Still on the same page, she says, “C’Mon Saul, I know you’re there. Face me, you chicken M-F!” Chicken M-F? Sorry to us profanity, but what the fuck is that? I have no idea who this woman is, who Saul is, and why the hell I should give two shits. It’s the first fucking page and I’m already turned off! You would think it has to get better after this, right? Right?

Suddenly there is an explosion that only makes Jennifer Cabre-Rios take a knee. Then someone, presumably Saul, starts shooting at her. 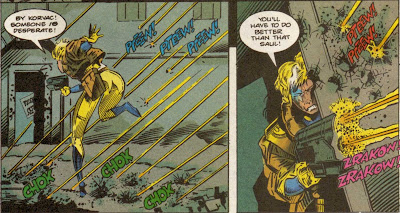 Whoever is shooting at her, their gun goes “PTEEW!” when it shoots and the bullets go “Chok” as they hit the ground. At least in the first of these two panels. In the second, apparently, when the bullets hit the wall they now go “PTEEW!” They can’t even get their sound effects consistent, and we’re only on the second page. Of course, Jennifer Cabre-Rios’ gun goes “ZRAKOW!” – but I think it only does this when she scrunches her face to make it look like some sort of anime character with either constipation or hemorrhoids.

Whatever. And I was in such a good mood before I started this….

Although we never see a door, Jennifer Cabre-Rios somehow enters a house that is richly appointed. She then shoots a guy carrying a silver covered platter (this time it is her gun that goes “PTEEW” – I guess she wasn’t making the face). The guy she has shot is like a butler and she recognizes him and thinks that she is back in her home. Or something.

She then runs up the stairs calling for her Mom. Really. I have no idea why.

Jennifer Cabre-Rios enters a room and sees a woman sitting in front of the mirror. This is apparently her mother, who then chastises her for not being lady-like. Mom thinks Jen should be carrying needlepoint or knitting, not a gun. 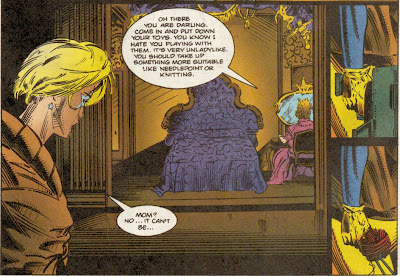 The gun turns into a ball of yarn and some knitting needles. It doesn’t phase Jen at all. Jen then suddenly becomes a little girl of ten or eleven and starts asking her mother the appropriate why and where questions, just as I start asking myself why I’m still reading this and where is the whiskey. 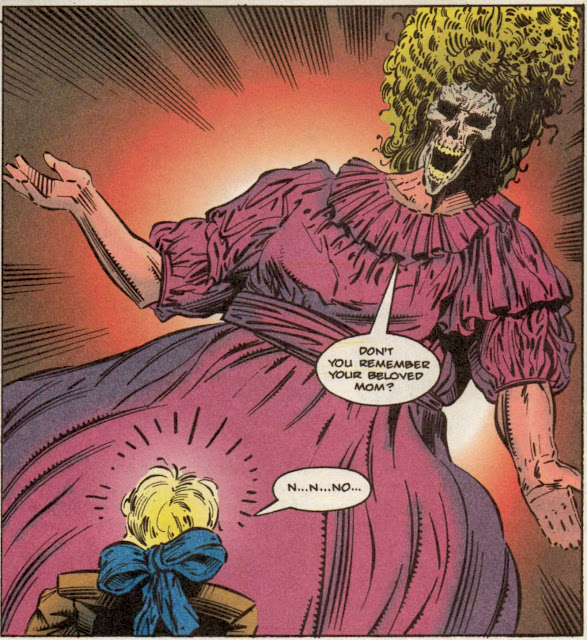 Oh Sweet Jay-Zeus! Skele-Mom! What horror upon the horror are they serving up here?

I’m starting to think this is a dream maybe – but I have no idea what’s happening.

Jennifer Cabre-Rios then kills someone named Onan and then maybe kills someone else named Shan O’Meara, but I can’t tell. Then Skele-Mom starts asking her all these questions.

Then, a moment of clarity. Jen expresses my thoughts perfectly: 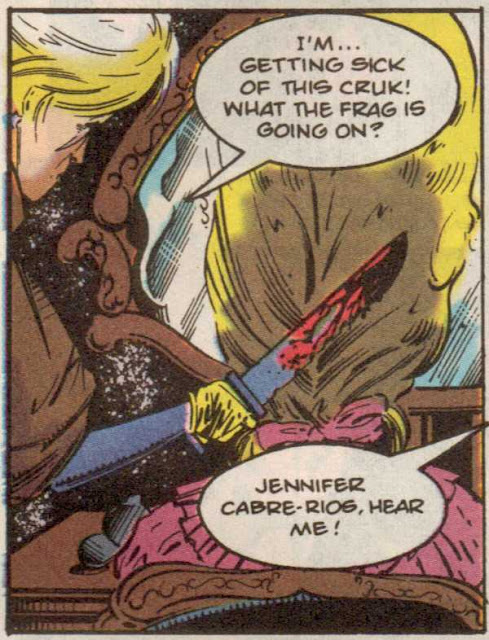 I’m getting sick of this cruk, too! Someone please tell me what the Frag is going on!

But clarity doesn’t last in the time of evil.

Saul shows up. And he’s a Jawa. 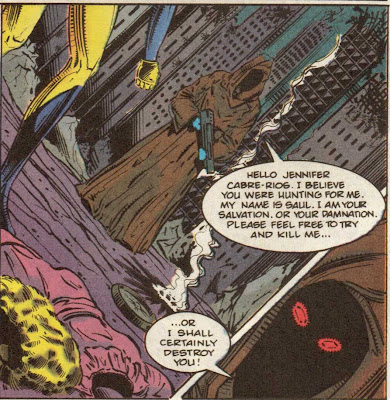 But it doesn’t get any better.

Now we’re looking at a space ship called Sol III, which is carrying “the galaxy’s survivors from wars with the Badoon.” Then we hear about some foiled insurrection by a “group of cultists called the Clan Cyorse.” Then we see some bug aliens called the Trilexia waiting by a wormhole.

All that on one page.

Luckily there is an ad for Valiant Trading Cards on the next page to sort of sooth my addled senses. Then I make the mistake of turning the page again. 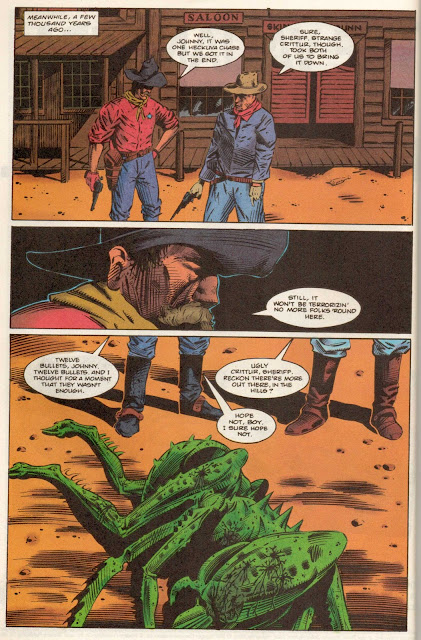 How do you start a page with “Meanwhile, a few thousand years ago…” and not expect me to start screaming? These are cowboys. They’ve killed one of the bug aliens. We never see this again.

Next we’re “back in the thirty-first century” where we see Jennifer Cabre-Rios unconscious on what appears to be some sort of hospital bed. She is being attended to by Doctor S’Rell, who looks like a cross between Yoda and a Goblin from World of Warcraft, if they were both gray.

Two guys show up who seem to be Jen’s teammates or something. There’s some weird attempt at humor or something. Then Doctor S’Rell tells one of the guys to grab Jen’s hand. When he does it is incorporeal. Apparently Jennifer Cabre-Rios is only a hologram.

The Doctor calls them Chumbos.

Then here’s the next page: 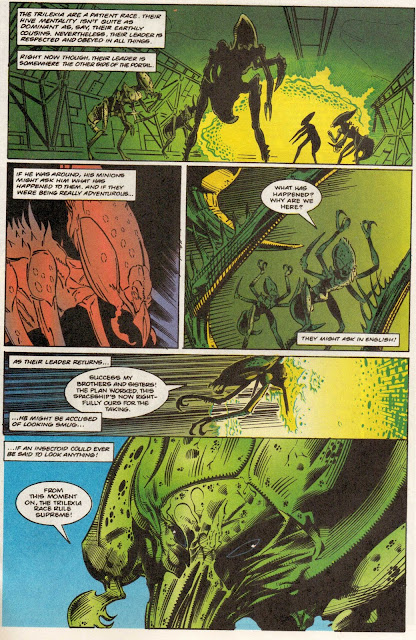 I have no idea what is happening here. All those “if’s” and “might’s” have made my eyes bleed. It can’t get any worse than this, right? Right?

Suddenly we are witnessing a battle between Dark Angel, who was the herald of Galactus in October of 1993, and the Silver Surfer, who is “now known in this time frame as The Keeper”. Apparently he also likes long flowing red sashes too. 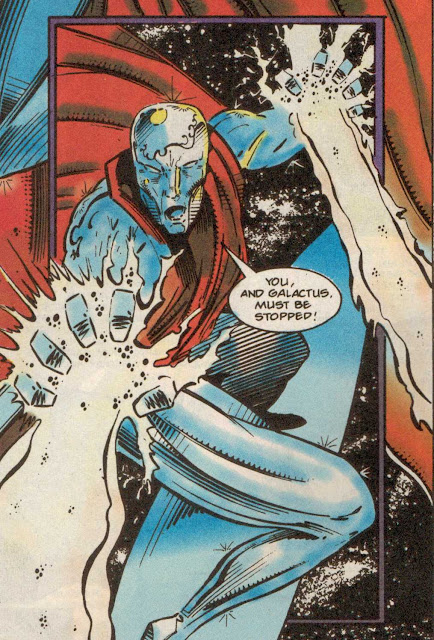 We get four pages of Dark Angel trying to explain to the Surfer/Keeper that time-lines are all messed up (like this comic) and that they have to join together to keep the fabric of the universe from unfolding. It is probably the most confusing thing I have ever read in a comic.

It hurts. It really, really hurts.

There are three pages left in this comic. It can’t get any worse, right? Right?

Now we get to go back to Jennifer Cabre-Rios and Jawa Saul. Jawa Saul explains to Jen that she is dead, but not really dead, she has just ceased to exist.

And then there’s the penultimate page: 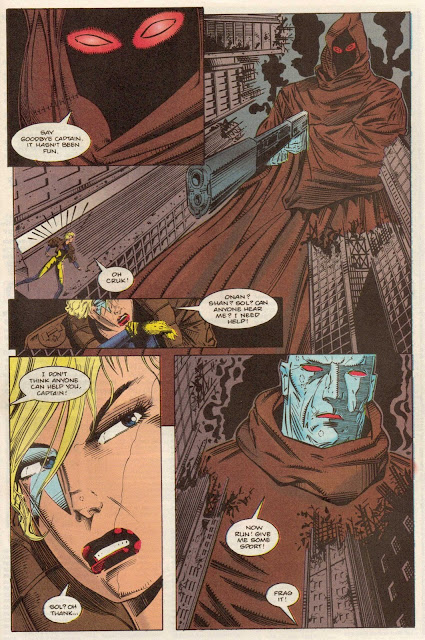 Now Jawa Saul is giant. Wait, is he the Silver Surfer? I mean The Keeper? I mean Saul? I mean a Giant Jawa? FRAG IT indeed!

The final page of the comic (thank god) takes place back on the spaceship, Sol III. The two guys who are never introduced are trying to figure out how you can have a solid hologram. They want to ask Sol (the ship?) about it, but Dr. Yoda Goblin tells them that Sol has gone off-line and Jennifer Cabre-Rios’ body has “just faded away.” 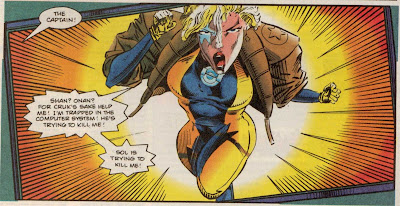 Man, she has tiny hands.

So it’s not a dream? She’s in the computer system? Jawa Saul is Sol, who may or may not be the ship?

For Cruk’s sake. Ihave no idea what I have just witnessed.

It was exhausting. And painful. Torturously painful. We should be dropping this fucking piece of garbage over Gaddafi’s house and end the whole Libya situation. It only cost fifty cents, just think of the savings to NATO.

I have been reading comics for a long time. I have read a lot of bad comics in that time. This may be the worst. Fifty cents was far, far too much to spend on it.

Maybe it’s an English thing? This was from Marvel Comics UK, after all, and probably didn’t see much light over here in the states. Maybe I’m too jingoistic and xenophobic?

Or maybe this is just crap.

Next week’s Two-Bit Comic has to be better, right? Right?