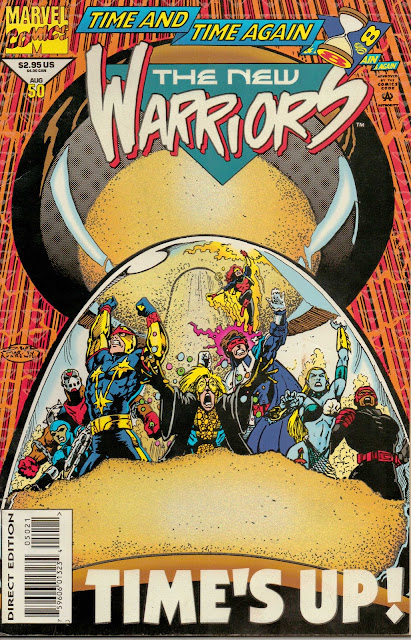 I HAVE HAD ENOUGH OF YOU!!

How could you forget The New Warriors #50? I mean, it had a glow in the dark cover!

Love them or hate them, The New Warriors have been around since 1989 and they still try to be significant to Marvel continuity today. Remember Civil War? Issue #50 is the conclusion to a long arc called “Time and Time Again” and it is the last issue draw by Darick Robertson (who had taken over from Mark Bagley on issue #26). This was also inker Larry Mahlstedt’s final issue. Even writer Fabian Nicieza only lasted for another three issues after this one. I guess you could say that The New Warriors #50 was pretty much a farewell for everyone involved. The book limped along for another 25 issues before being canceled. Don’t even get me started on the subsequent attempts to revitalize the franchise.

But on to the book at hand.

The New Warriors #50 begins with a page that introduces our heroes, our villain, and gives a nice little wrap up of everything that has happened before: 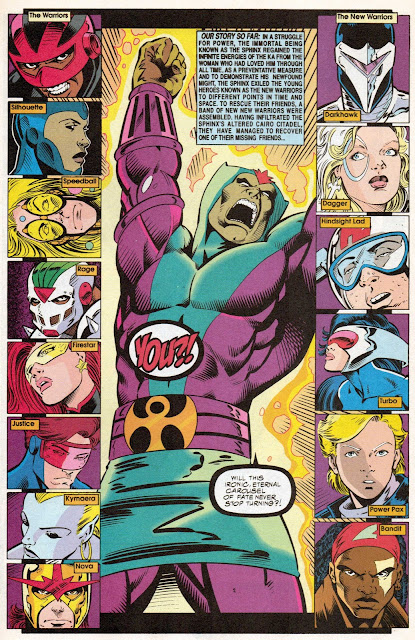 We’ve apparently got fourteen New Warriors up against a long-time Nova baddie, The Sphinx. Of the fourteen, half are “original members” including Night Thrasher, Speedball, Firestar, Nova, Kymaera (aka Namorita) and Justice (aka Marvel Boy). The other half is composed of “new” New Warriors, including Dagger, Power Pax, and my personal favorite, Hindsight Lad (not to be confused with Captain Hindsight of South Park fame).

The Sphinx has exiled the original members of The New Warriors to “different points in time and space”, and the “new” New Warriors have come to together to save them.

Nova is the first to return: 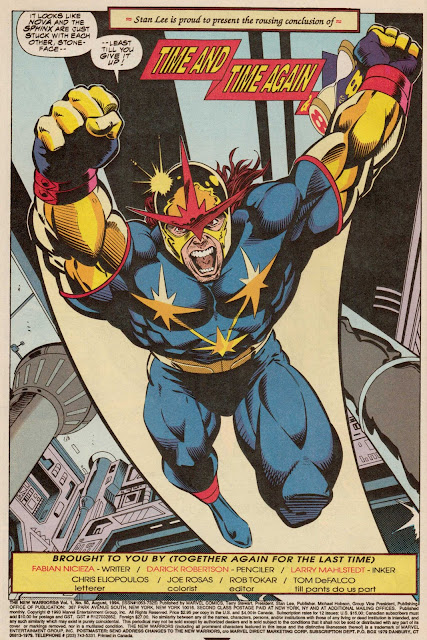 Darick Robertson is one of my all time favorite artists working in comics today. His art in Transmetropolitan and The Boys defined those books as much as the writing of Ellis and Ennis. Darick Robertson is a great artist, but this splash page is ridiculous. What’s up with Nova’s left arm and leg? This was the 90’s, though, and I guess everyone was doing crap like this.

So that’s two splash pages to start a comic. Why not a third? 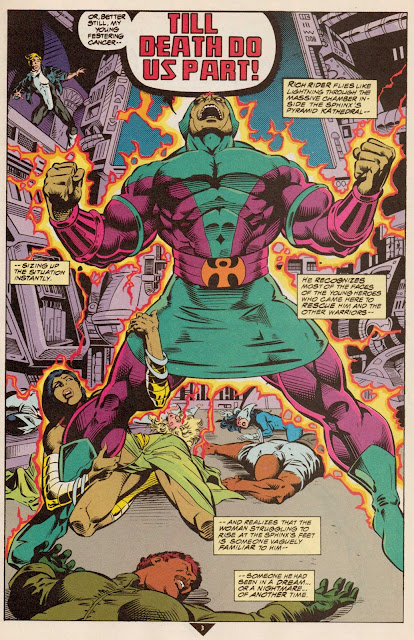 So we got everything going now. We know what happened before the issue began. We got our hero (Nova), and we got our villain (Sphinx). What comes next? Why they fight, of course. Nova levels The Sphinx with “an explosive Gravimetric Pulse” (which apparently sounds like “SHAKREEEEEESHOOW”), but it does no real damage.

The Sphinx tells Nova that by enduring the “emotional and physical travails of the alternate timeline” he sent him to and by coming back “a better person than the one who left,” Nova is a true hero. Nova asks The Sphinx “what the $%#@ do you know about being a hero?!” To which The Sphinx answers that as he has lived several lifetimes and has “played the part of hero and villain – enough to know – that the petty constraints of both” are beneath his “Needs.”

Nova asks him “So what is it you need?” The Sphinx responds:

The book then cuts to Darkhawk, Dagger, Power Pax, Bandit, and Hindsight Lad trying to figure out how to use The Sphinx’s “Cross Chronal Monitor” and “Timeline Scanning Device” to save the banished New Warriors. During this conversation Meryet Karim (aka Lady Sphinx) proposes that The Sphinx always provides “a means unto which he can be defeated”, which Hindsight Lad takes to mean that, “He has a psychological profile – that perpetuates a wish-fulfillment cycle – in which he desires to fail in his endeavors.”

So, The Sphinx is a seemingly immortal being with god-like powers who suffers from masochistic personality disorder. This is a pretty complex characterization, I must say.

Lady Sphinx tells them that all of the Warriors are going to be the “Catalysts” for The Sphinx to realize “the inevitable futility of his power-lust.” I guess this means they are going to kick his ass?

Back then to the fight between Nova and The Sphinx. This comic is getting all full of psychological motivations now, even as The Sphinx’s hand blasts go “SHAKOOM SHAKOOM”! Nova questions The Sphinx as to what he hopes to gain through all the power he has amassed. The Sphinx answers, “It is a quest for the sake of the quest! What more is left for me, who has lived through the span of millennium?!”

Nova tells The Sphinx that power means nothing, ultimately. What is really important is “family and friends – responsibility to the people I care about” The Sphinx points out then that these things can hold no meaning for him as he is immortal and lives “filled as they are with love and sorrow and madness and joy – are but the blinking of an eye to me!!”

He does have a point here. Immortality, while seemingly desirable, does carry with it the baggage of everyone else’s mortality. You get to watch everyone you love age and die. I would imagine that might harden a person -- maybe even piss them off a bit.

The book cuts back to the new New Warriors and the “Cross Chronal Monitor” trying to locate the regular New Warriors. They are able to quickly locate Speedball because he is “a being comprised of kinetic energy” and, as Hindsight Lad conjectures, since “all of time is measured by our forward movement through this plane of reality … and (Speedball) embodies that movement by existing as being of kinetic energy … then the instants in which all of the other Warriors were taken from the here and now – exists within his form!”

So, somehow or another by using their powers and by having Dagger give him “a shock of awareness” the new New Warriors are able to get Speedball back to the present: 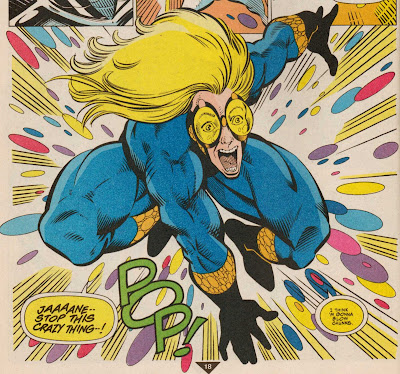 Speedball’s return allows the rest of The New Warriors to return to the present and go kick some Sphinx Sphincter: 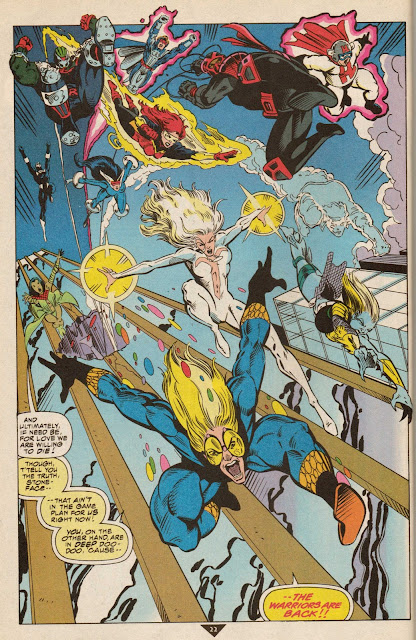 But remember, the Sphinx is a heavy dude, thick with self-reflection and a bad case of masochistic personality disorder. He ruminates on his fate. He considers that time and time again “the tidal swell of what is to come – will always fight against the undertow of the past”. He finds himself “forever denied” his chance to find “a sense of purpose” to his “useless life” 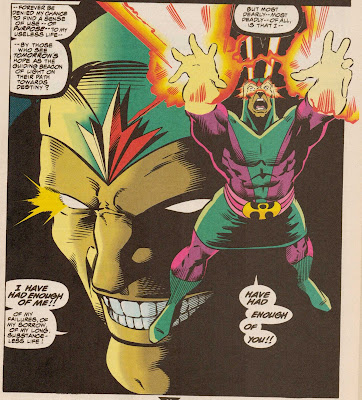 This is pretty heavy stuff – not at all what I was expecting from a New Warriors comic book from the mid 90’s. “I have had enough of me!! Of my failures, of my sorrow, of my long, substanceless life! But most dearly – most deadly – of all, is that I HAVE HAD ENOUGH OF YOU!” Boom! Now this is characterization! This is some motivation I can sink my teeth into. This is pretty damn good stuff!

The battle ensues and New Warriors drop left and right. Night Thrasher tries to get them to function as a team, but they can only knock The Sphinx down, not out: 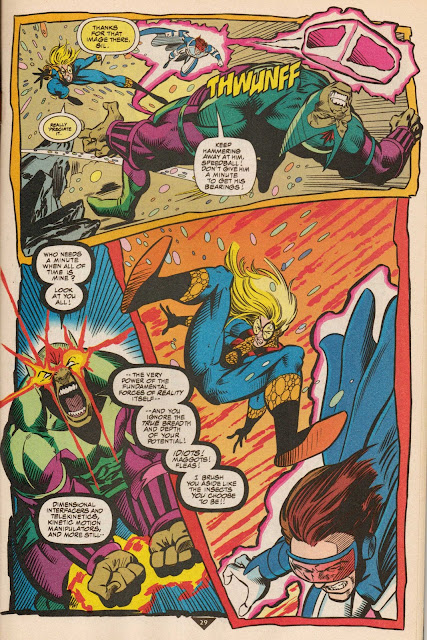 After Power Pax clears the perimeter of civilians, Night Thrasher gives Firestar the OK to open it up and give The Sphinx everything she’s got: 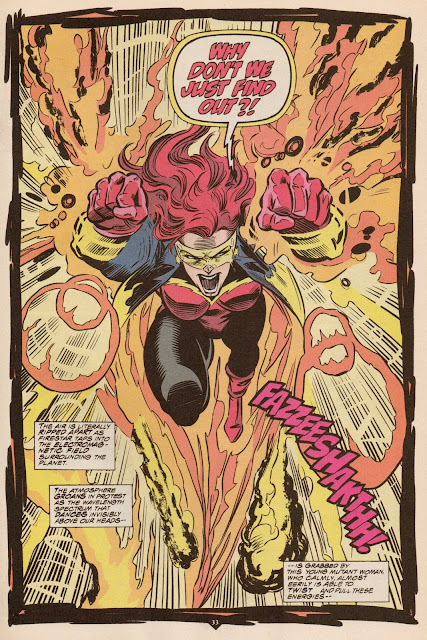 She hits The Sphinx with a “SHAKKATHAKKRAMMMM” but even this heavily consonated blast is not enough.

It turns out the only thing that can defeat The Sphinx is ‘THE TRUTH!”

No, not Carl “The Truth” Williams. He couldn’t even last a round with Mike Tyson.

We get a “Suffering Shad!” from Kymeara and a “Blue Blazes” from Nova, who then launches into this diatribe about how through their recent trials they have all learned something about themselves, and this new self-awareness is the key to defeating The Sphinx. The TRUTH is the power they need to defeat him.

This is where things get a little vague. I’m sorry.

Suddenly Veritas, the Sayge, shows up and tells the New Warriors that the TRUTH will set The Sphinx FREE! Veritas is apparently the living embodiment of TRUTH and one hell of a deus ex machina!

Veritas is able to connect The Sphinx to the power of Love???

The Sphinx falls to his knees and says that through his “misbegotten zeal over the love of power – did (he) fail, once again, to anticipate the power of Love.” He and Lady Sphinx then join hands and: 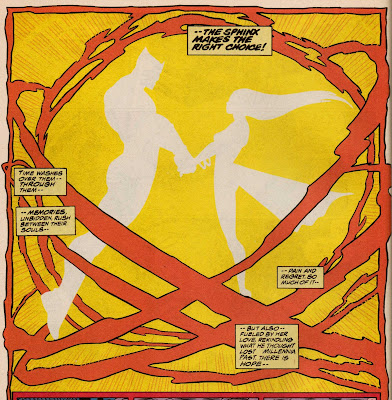 “There is hope that life can be better. That love IS worth struggling for. That the truth, inevitably, will win out.”

Speedball then yells, “Holy Hermaphrodite!” as a new creature of hope or love or something sweet like a baby’s laugh or a puppy’s smell is brought into being through the union of The Sphinx and his lady:

That’s the Power of Love all right….

Veritas then disappears as quickly as he arrived, telling all the loving Warriors that he is “forever at your call – all you need to do to find me … is look within … yourselves”

Then, in the last panel of the book, Speedball asks: 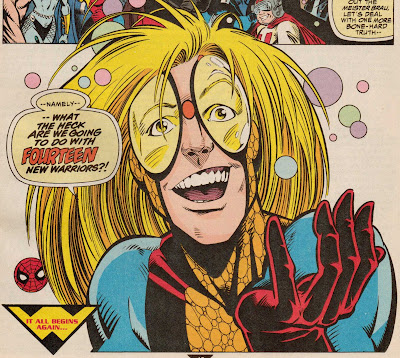 Apparently the answer for the creative team behind this comic was to jump ship.

So what’s the final verdict on The New Warriors #50? For fifty cents, this comic had me in the palm of its hand. Robertson’s art (other than that one Nova Splash Page) is dynamic and exciting. Nicieza’s characterization of The Sphinx is filled with pathos and you feel for this villain and understand why he does what he does. IT’S GOT A FREAKIN’ GLOW-IN-THE-DARK COVER! Hell, the book even features Hindsight Lad! I mean what’s not to like here? Sure the bit about Speedball’s kinetic energy and time is confusing, but forgivable. The vague sudden appearance of Veritas is disjointed and feels a bit like a cop-out, but how else can they end this book on a positive note. This is the creative team’s farewell song, it seems. They didn’t want to go out on a downer.

No. The New Warriors wanted to remind us that it is our connections with others that give our lives meaning. Our family and our friends are the true source of power. That’s the Power of Love.

Hmmmm… Huey Lewis was right, after all…

Like what you've read?
Check Out More
TWO-BIT COMICS
along with other Geek related sweets
AT POP CULTURE ZOO!