Today I found, Sweetgrass by Lucien Castaing-Taylor and Ilisa Barbash, released at the 2009 Berlin Film Festival. 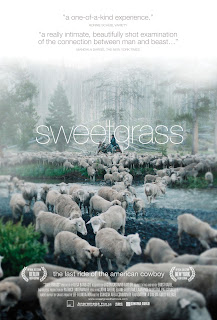 Sweetgrass has to be one of the most visually stunning documentaries I have ever seen. It is this beauty that kept me glued to the screen.

To be honest, not a lot happens in Sweetgrass. Ostensibly, the movie is about a small group of “cowboys” as they run a flock of sheep up into the Absaroka-Beartooth Mountains of Montana to their summer pasture. There is little drama, less characterization, and even less narrative. The documentary is really an anthropological ethnography, but it is absolutely gorgeous in its presentation.

Barbash and Castaing-Taylor let the images do all of the talking. Like all great documentary filmmakers, they document what they see, not commenting, not even explaining. What they create by doing this, though, is a vehicle which allows the audience to feel immersed in what they are viewing. The filmmakers hold particular shots for three to four minutes, letting the viewer become part of the environment. This allows subtle surprises to generate on their own.

The best example of this is right at the beginning of the movie. There is a shot in which a particular sheep is the focus of the frame. It is staring off into the distance, chewing ruminatively. This sheep then slowly turns it head towards the camera and, in an instant, it fully engages in the fact that the camera is there. It stares out directly from the screen and stops chewing.

Talking about the scene does it no justice. It is a visual masterpiece to witness. 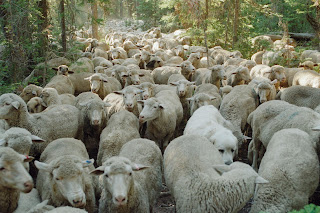 Understanding who the directors of the film are gives a better sense of the tone of the film. Their press release says:

Ilisa Barbash and Lucien Castaing?Taylor’s work seeks to conjugate the ambiguity and provocations of art with a documentary attachment to the immediate flux of lived experience. Working in Montana since 2001, they have deployed different stylistic registers in film, video, and photography to evoke at once the attractions and the ambivalence of the pastoral by juxtaposing monumental and mythological Western landscapes with multiple tracks of subjective synchronous sound.

Barbash and Castaing-Taylor divide their time between Massachusetts, USA, and the French Pyrenees. Barbash is a curator of visual anthropology at Harvard University’s Peabody Museum, and Castaing-Taylor is director of Harvard’s new Sensory Ethnography Lab, and a professor of Visual & Environmental Studies and of Anthropology.

To be honest, I’m not really sure what a lot of that means, but it does become apparent that these are no schmoes. What we have are highly intelligent, highly educated individuals who are making a film not to comment on something, but to document a way of life.

The documentary, as it turns out, also ends up being an elegy. Due to the federal government reintroducing endangered wolves into the environment, along with the continued dwindling of America’s appetite for lamb and wool, the film ends up documenting the last sheep drive in these mountains. The movie does not mention this fact until the end however, and the directors do not politicize the content of the film. This is a documentary, documenting lives and work and the environment in which it all happens.

And it is beautiful.


An interesting Interview with the filmmakers: