Carolyn C. Nowak is an Ignatz-award winning and Eisner-nominated cartoonist based on Ann Arbor, Michigan. Her work explores horror, sex, science fiction, and fantasy. You can check out her website and buy her books here and follow her work on Patreon here. 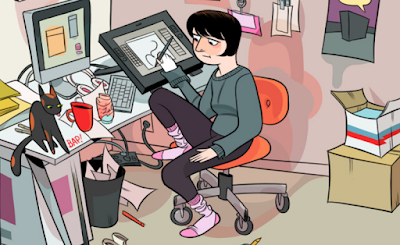 Sara L. Jewell for YCE: For those who might not be familiar with your work, can you tell us a little bit about it?

Carolyn C. Nowak: Oh, um...ha! I have a hard time summarizing. It's...magical realism? Genre stuff? Short weird things? I have no manifesto to draw from.

Nowak: It changes a lot in the minutiae but it always starts with like 4 or 5 google docs that are just clusters of ideas. Then I go hard on one and inevitably abandon it because it gets stiff. Then I find a new thing, somewhere, in the wreckage. The drawing part changes all the time, the only consistency there is that I am always late and panicked and I never get to do the job I want. And I never will, because the thing I want to do is perfect.

Jewell: Girl Town, your comics collection published by Top Shelf last year, centers - as the title suggests - stories about women and their complex relationships with one other; stories that cartoonist Carta Monir characterizes in the introduction as being about “women whose friendships with other women are their lifeline”. What other through-lines do you feel hold these stories together?

Nowak: Fear of intimacy, I guess. A fear of life in general. Fear! It's hard to think about at this point because I didn't intend them all as a collection, so any answer I give you is going to probably be something someone else projected upon the work.

Jewell: One of the first things I read by you (and adored) was Diana’s Electric Tongue which I picked up at SPX after it won an Ignatz in 2017 before I’d even heard of Zainab Akhtar’s incredible ShortBox publications. How did you initially get involved with Shortbox?

Nowak: Zainab saw fit to invite me to participate! (Prayer hands emoji) I think she first saw my work when I did something for hourly comic day in like...2015.

Jewell: Of the many things that blew me away about Diana’s Electric Tongue, one was the proliferation of small futuristic details you included in an offhand way, from Diana’s underwater hotel to Blue’s laughter onions. What, if anything, did you take inspiration from in realizing this world that’s ahead of or apart from our own in all of these sorts of idiosyncratic ways?

Nowak: I thought a lot about the movie Ex Machina -- and when people ask me about the inspiration for DET I inevitably bring this movie up. It's got some nice futurism, ok, yeah, but Alex Garland thinks he's saying something big about the human condition and all I can hear is "I'm really horny for robots". And I was like, yeah bro, me too. The other specific sci-fi details..."underwater hotel"...I don't know! It's mostly random shit that sounded fun- and all that stuff, I don't know, it feels like you could swap it for almost anything, so you might as well plug in the fun thing.

Jewell: Are there any science/speculative fiction comics (or other media) that you really love and/or are inspired by? 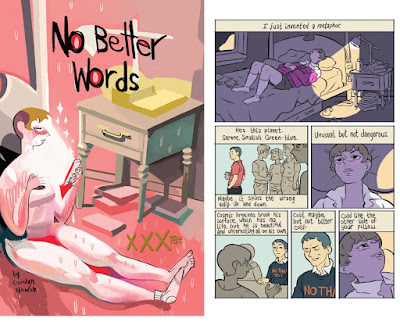 Jewell: In your adult comic from Silver Sprocket, No Better Words, (recently nominated for an Eisner!) your protagonist remarks on the inadequacy of language to express herself, though she narrates the story primarily through metaphor. Do you feel like comics are a more effective way of telling stories than prose?

Nowak: Not particularly. Comics just take so much time and they're so hard to edit and also almost nobody reads them. And, like...it's easy to get turned off by art, even art that's really effective. And people generally, maybe just in America, I don't know -- they don't know how to read art. Everyone takes English Lit in high school, you have to figure out why Catcher in the Rye is supposed to be great, but nobody's doing that for like, Barnett Newman paintings -- nobody seems to be doing that in a serious way for art that is even a little bit oblique. In order for a storytelling medium to be effective at all, the greater population has to have some base...like, literacy for the thing. I hope I don't sound shame-y, I don't mean it that way. It just seems true -- and it was certainly true for me for a long time. I wouldn't read a comic that didn't have "good" art -- and for me, and I think for a lot of people, that means a really specific thing. It means Alex Ross or James Jean. Good "draftsmanship", I guess!

Jewell: I *wish* I’d had an art literacy class in school! So, many of your stories, in Girl Town and otherwise, kind of make this ominous tonal shift near the conclusion that’s difficult to describe to someone who hasn’t read them. Can you speak on your purpose in ending some of your comics this way, and what goes into evoking a certain tone in your comics to begin with?

Nowak: Haha, not really. I'm just gimmicky, I guess. When I think of a story I have this image in my head of...all the elements of the story, in a bucket, on a rope, and I'm holding onto the other end of the rope and I start twirling really fast. And then I try to let go of the rope at exactly the right moment so that the bucket hits someone in the face, or goes off a cliff or something. I just don't know how to end a story otherwise... probably because I don't read much.

Jewell: Something I really enjoy about your work visually is the fluidity of your line, especially your figurative line when depicting the body – do you intentionally avoid hard or sharp angles?

Nowak: No, I just do whatever is easiest. Also, I think the last 3 stories in Girl Town were drawn with "Manga Studio debut"- a super shitty old drawing program with this specific pen I came to love that just happened to make really ugly straight lines. You just couldn't draw any kind of sharp angle without it looking like total dogshit.

Jewell: Many of your depictions of women have what I would describe as contempt for the male gaze, starting with your cover which references “truth coming out of her well”, a painting that apparently justifies its male-gazey nudity as a gesture towards the idiom “the naked truth”. What’s your intention, if any, in depicting naked women in Girl Town?

Nowak: Bleh, I was just drawing people. Everything being framed as this weird opposition to maleness kind of distracts from the actual content of the book -- don't you think? Sometimes I get fucked up and confused by people talking about the work this way -- like my brand is now anti-men. Especially after that Comics Journal review. Like, I went off a little, on how the book is for women and not men but honestly, there was no intention in either direction. And acting that way, unfortunately, sort of mirrored the expectations of the reviewer - like, "yeah, fuck you! boo, men!! It's a girl book!!" It's not a girl book, I know it's called Girl Town but it's just a book I made about being alive and I happen to have been assigned this particular gender and these are some stories that reflect that experience. Some of them explore relationships with men because I've been emotionally and physically intimate with some men. I don't care about alienating them with my work, but I'm not making it with that specific purpose. 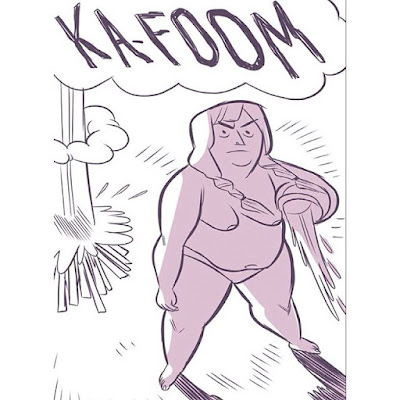 Jewell: I don't really see your work as in opposition to maleness or men (some of it, to the contrary) - I just feel like work that presents naked women in a way that isn't about men's sexual gratification is unfortunately still pretty outside of the norm, and the titular story especially did that in a way that I really appreciated as a queer woman. That segues really well into my next question though: much was written about that infamous review of Girl Town which, among other things, subjected us to a man repeatedly using the word “gynocentric” to describe your work. In terms of people, usually white cis men, expecting art, which more often than not has historically centered people like them, to “universalize” experience when they feel it does not – do you think this is a fair expectation?

Nowak: Nope. And that shit gets in my head all the time, it’s impossible for it *not* to. Men are in power pretty much everywhere so...it’s hard to tell yourself that’s not just an inevitable fact of life. I’m desperate for their approval and love, honestly. I would love to make something that earned their praise and respect. But it’s just so fucking conditiona -l- I never get it right. And trying makes me completely crazy.

Nowak: Not really! Everything is sort of as nascent as it could possibly be, but I’m excited nonetheless. I’m getting better at comics all the time. I’m getting smarter and more ruthless and more efficient.

Jewell: I can’t wait to read whatever’s next! So, what’s in *your* to-read pile and what are you currently reading?