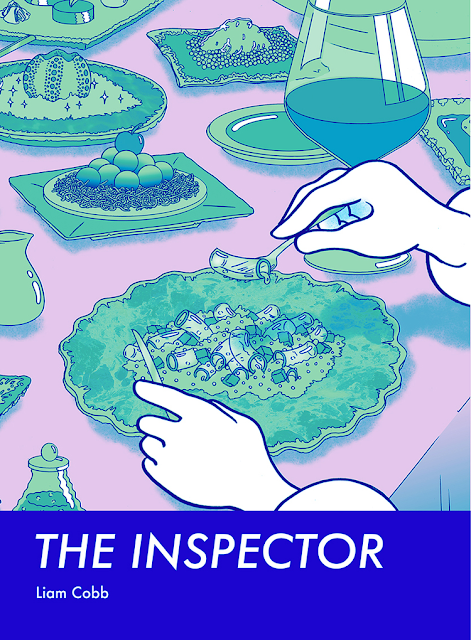 Confession time right at the outset: I actively despise what's generally known as "foodie culture." Mind you, I absolutely appreciate the fact that there is a real artistry to good cooking and that restaurants which practice things like the so-called "farm to table" philosophy are certainly going about their business more ethically than, say, McDonald's is, but let's be honest: every goddamn chef thinks he or she (and it's far too frequently a "he" --- a major problem with the restaurant industry is the male domination of, and the resultant culture of misogyny inherent in, most kitchens) is at the very least a local, if not a national, celebrity; menus have become pretentious, ego-driven, and hideously expensive; wait staff act like they're the stage performers a good chunk of them wish they were --- the whole experience of eating out has become a nauseatingly garish production.

Which, I suppose, is fine for dinner theater, but for a weeknight out with your significant other? No thanks, I'll stick with a burger and a beer at the corner tavern or tacos at the neighborhood Mexican joint. I never want to be seen in a place full of people with their heads so far up their asses that they have the unmitigated gall to critique food on such disgustingly frivolous grounds as its "presentation" and "flavor symphony" while a good half of the world is literally starving to death. There's something not just tone-deaf, but seriously sick about all of this wretched excess.

Liam Cobb gets this --- or, at least, I assume he does. Anyone who's read his 2018 Retrofit/Big Planet-published graphic novel, The Prince, can tell you that misdirection, ambiguity, and maybe even a kind of casually callous amorality are prominent features in his work, and these are all present and accounted for in the tone and tenor of his latest work, the short-form The Inspector, released at the very tail end of last year by Breakdown Press. The target of Cobb’s satire (or maybe we can just shorten that to his ire) herein is obvious enough --- but he also seems to offer no real alternative to the gluttony he's skewering, nor even any particular reason to do anything other than go along with its flow. 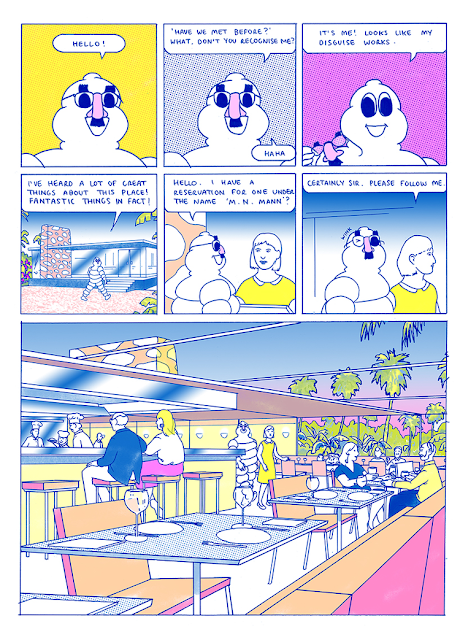 Which, fair enough, may not really be his job, and a "we're fucked no matter what" attitude can make for something of a conceptually exciting reading experience in and of itself. I don't particularly need my hand held through a comic, and I am perfectly capable of forming my own opinions along the way and conclusions at the finish, but it would be less than honest to say that this story --- which focuses on a careless, thoughtless, Michelin Travel Guide restaurant critic who's well and truly an embodiment of the company's famously weird mascot --- wasn't tinged with a strong undercurrent of resignation bordering on nihilism. If that's cool with you, then you're gonna get plenty of food for thought, as well as a generous serving of belly-laughs (some in spite of yourself) from this comic. If not? You're in for not so much a disagreeable time as an empty, maybe even a pointless, one.

If all of this sounds eerily reminiscent of the pros and cons offered up over the years in regards to existentialism, that's no accident: Cobb's cartooning oeuvre seems to echo the “everything is what it is and even if it were some other way it wouldn’t really matter” outlook of Camus or Sartre more than it does, say, Crumb or Kirby, but there's a sharp wit at its core that steers it well clear of the bleakness of a Ware or a Clowes. In short, he's managed --- and in a fairly brief period of time at that --- to establish an authorial voice entirely his own, one that's equal parts alluring and alienating, realistic and absurd. Reading his comics is challenging, but in no way off-putting --- yet there's an observational quality to them, a detachment that may not go so far as to push you away, but doesn't exactly work overtime to draw you in, either. 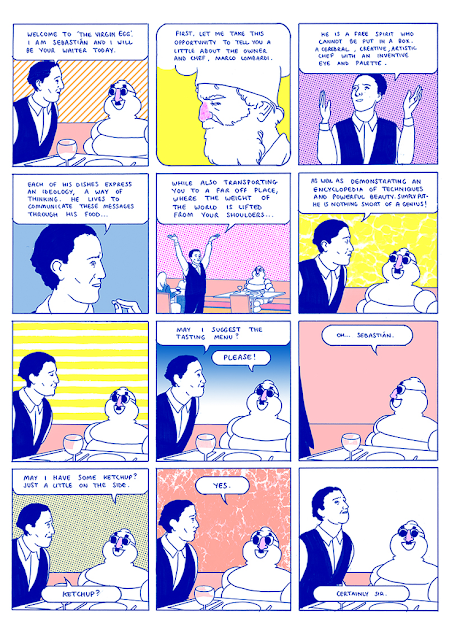 There is, for instance, no real plot "progression" in The Inspector until the very end --- our Michelin Man simply goes from town to town, eats ludicrously grandiose dishes prepared by pathetically self-important chefs, and acts every bit as self-satisfied (not to mention self-indulgent) as the self-appointed “superstars” preparing and serving his food. At the last second he learns the disturbing secret behind some "mystery meat" he's about to consume, and then ends up relaxing on a tropical island with a beautiful woman. He may have stumbled onto a scandal that serves the restaurant industry a well-deserved comeuppance, but he's still leading as charmed a life as ever, more by dint of dumb luck than anything else. Maybe Rod Stewart was right, after all --- and that's the first and last time you'll ever hear me say that.

This balancing act of the droll with the intentionally bizarre carries over into the artwork as well, with Cobb's austere and economically-delineated illustrations here counter-balanced with garish riso-printed pastels that catch the eye but almost seem chosen to deliberately conflict with the workaday simplicity of so much of the linework. It's effective, don't get me wrong --- as is the juxtaposition of jam-packed, tight grids with sprawling, double-page "splashes" --- but it's a study in contrasts designed to jar every bit as much as the disparately-paced narrative, which essentially runs in place until it hurries up to the finish line. 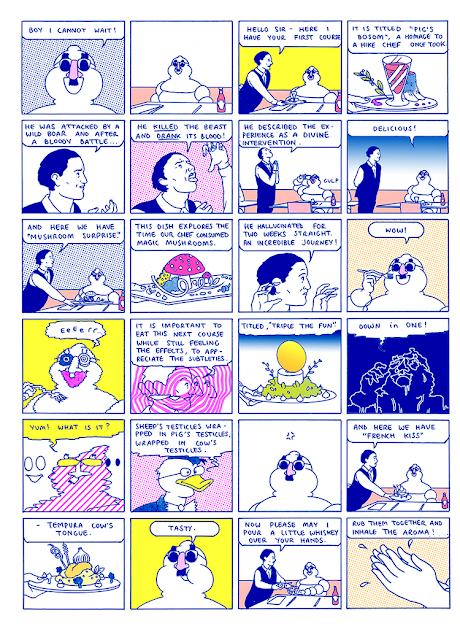 All of which leads, more than likely entirely by design on Cobb's part, to the ultimate irony --- and as blindingly obvious as it is for me to describe it as such, it's a little bit of a delicious one. Much like the exercises in conspicuous consumption it mercilessly and deservedly lampoons, The Inspector works because of the combination and interplay of its ingredients. It may not make for the most delicious "meal" you've ever tasted, but it's unquestionably a memorable one, and chances are you'll come back for seconds, as well as feel suitably compelled to see what the chef who crafted it comes up with next.