Everything, Nothing, And All Points In Between: Ryan Carey Reviews IN CHRIST THERE IS NO EAST OR WEST by Mike Taylor 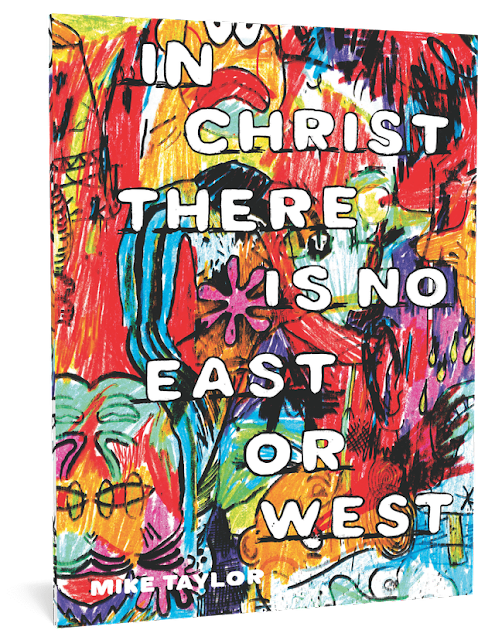 Navigating the present social, political, and economic reality is tough enough --- how are you supposed to get your own head together in the midst of all this chaos?

Cartoonist Mike Taylor's stand-in/protagonist Adam (and, yes, eventually that's revealed to be as obvious a choice of name as you're already imagining it to be), our one and only point of reference in and, in a very real sense, entry into, the metaphysical realms beyond and within detailed in the new graphic novel In Christ There Is No East Or West, is tasked with such a challenge and has the added burden of having been conscripted into this impromptu bit of soul-searching by none other than God himself --- but not until after he discards his ever-present "smart" phone at The Almighty's insistence.

Taylor has, of course, long been on a very public journey of self-discovery in the pages of his justly-legendary Late Era Clash self-published comics 'zine, but whereas that publication generally eschews anything approaching the lofty status of a "grand unifying theory of everything," this book seems to be every bit as much about the destination as it is about the circuitous paths that lead there. It's a heady, thought-provoking experience, to be sure, but to Taylor's great credit it's also a highly and entertainingly accessible one, and while it might come off as too inherently dismissive to call this "metaphysics for the masses," that's exactly what it is --- and that's meant as a compliment. 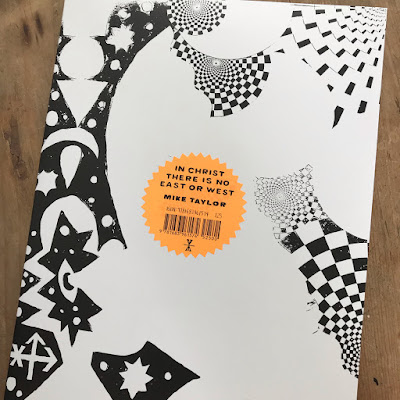 Gary Groth's "street cred" imprint, Fantagraphics Underground, has pulled out all the stops in terms of production values here and the fold-out poster that slips around the cover is not only jaw-droppingly gorgeous but sets the tone for the deeply personal, yet undeniably universal, explorations that play out on the book's generously over-sized pages. Taylor obviously had complete freedom to follow his creative impulses wherever they led him here --- not to mention however they did so --- and, to that end, expect a wide, at times even breathtaking, array of art styles that range from the near-abstract to the "scratchy" to the detailed to the downright lush, as well as transitions from black and white to rich, vibrant color and back again depending on where Adam finds himself. A great deal of flexibility is required on the part of the reader to absorb all these transitions, but it's actually easy enough to go with the flow Taylor establishes here given the organic fluidity of his sparse, borderline-poetic scripting. Words aren't plentiful, but they're chosen with care and employed with precise intent, as necessary tools to guide along a process that absolutely must be handled with utmost care.

And yet, there's an underlying sense of playfulness in the midst of this thick phantasmagorical jungle of the mind and heart, a Zen-like calm at the center that lets you know that even if everything may not ultimately be okay, it's at the very least going to be whatever it is, and learning to accept that --- to accept anything, really --- is the key to something more than mere prosaic survival; it's the key to progress, to evolution, to becoming.

Of course, "Becoming what?" is the natural-enough question that follows on from that, and Taylor offers no easy answers to it, but then nothing about Adam's "vision quest" (or whatever we want to call it) is what anyone would call easy, from his night spent in a castle made of ice occupied by a grumpy and isolated old-timer who shits something very much like chess pieces (yes, you read that right) to transforming into a plant to attending the strangest dinner party perhaps ever committed to paper --- but it's all rewarding, enlightening, and very frequently quite funny. Even if you're one of those readers for whom challenging yourself is inherently off-putting, there's nothing on offer here that's actively going to put you off --- and plenty that will, inexorably, draw you in. 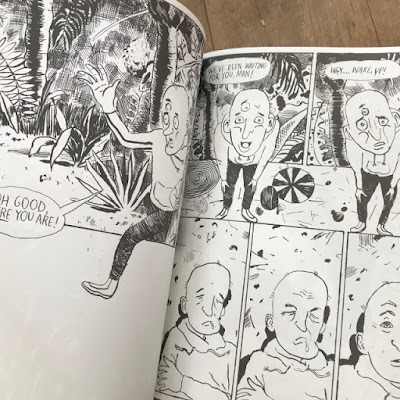 I'm not suggesting that everyone's "third eye" will open, mind you --- although it's an easily-available option should you wish it --- but when Adam meets a version of himself (I think?) that has been through that process, you won't question it. Taylor has a way of getting you to "buy in" to his idiosyncratic narrative style without a hint of force being applied, and while a lot of that is down to his virtuoso pacing (really, he puts on a veritable clinic in the art and science of it) that gets your toes wet before submerging your feet and going up from there, in truth there is a hidden element to the spell he casts right from page one that speaks to some sort of ability on his part to "tune in" to realms beyond to a far greater extent than he clearly feels he can. I'm loathed to invoke the supernatural as a matter of course --- art, for all its majesty, is still a thoroughly practical process, more often than not --- but dammit, I know magic when I see it, feel it, experience it, and this book positively oozes it from its paper pores. 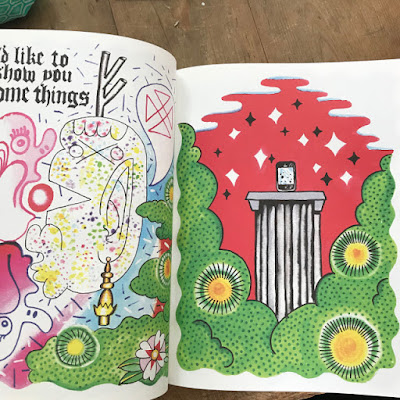 If, at this point, it seems this critic is being too effusive in his praise, is frankly gushing a bit too much, rest assured: every superlative I freely offer is entirely earned by this bold, inquisitive, humane, beautifully-illustrated work. In Christ There Is No East Or West is everything I look for in comics: equal parts challenging and accepting, "far out" and grounded, mysterious and easy to relate to. It isn't "about" anything specifically, perhaps, but encompasses nearly everything within its expansive, but in no way intimidating, scope. And if calling it "magic" is a bridge too far for you sober rationalists out there, fair enough, I'm prepared to happily call it a work of undeniable genius and leave it at that.