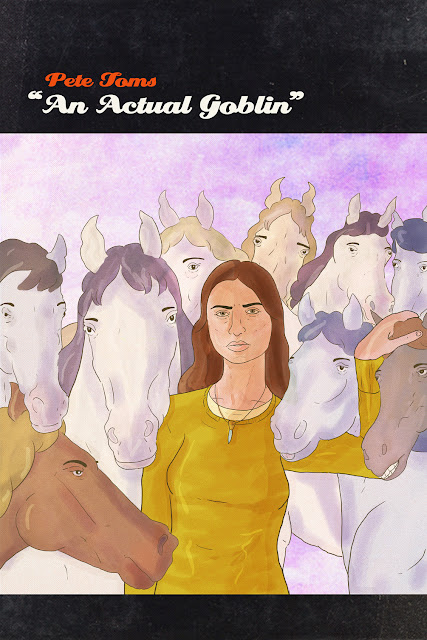 Did you ever think the end of the world would feel so maladroit? We yuk it up on tiny interconnected supercomputers, but as the days press on it really does feel more and more like we’re in that final Sweeps Week push of some product placement drenched three-camera sitcom, cackling over how clumsy and stupid each joke life throws our way is. I could die tomorrow via a piano landing on my head and I wouldn’t express an ounce of shock to whoever came to collect my soul. I’d simply ask what took so long.

No one dies that way in Pete Toms’ An Actual Goblin, but I’d bet real money its main characters would have similar reactions if they did. The world of An Actual Goblin isn’t quite our own, but it’s close enough that the effect is like, to paraphrase one of its minor characters, watching someone on a phone screen on a sunny day while they’re standing right in the glare. It is a comic of mirrored and hazy images, its humans wobbly and sagging, its only sharpness coming in its ample brand signage and Toms’ wit. It makes no sense yet it makes all the sense in the world. 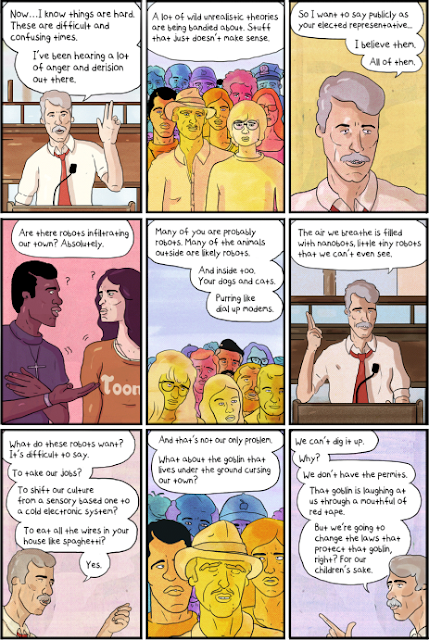 At the fuzzy center of it all is a “servtainer” at a Medieval Times-esque restaurant called The Dark Ages. She’s living with her mom at 45 and “still talks like a 30-year-old playing a 17-year-old on a one-hour teen drama.” In a drunken fit after getting fired, she releases The Dark Ages’ horses, causing her to lose a finger to one after asking it “why the long face” before it runs off with its herd to alternately terrorize the town’s residents and entrance them with equine majesty.

On the way to a town hall meeting to discuss the problem of the rogue horses, our defeated protagonist hangs out with her fellow ex-employee Perc, who continues to wear his Dark Ages priest attire while quoting Lord Byron, gets into a one-sided dance-off with a fiscally conservative street gang, and maybe sees Jesus in some tree branches. There’s a whole lot of activity here but, by design, no actual momentum: our slacker lead is stuck in spiritual tar and paradoxically distraught and thrilled by that. 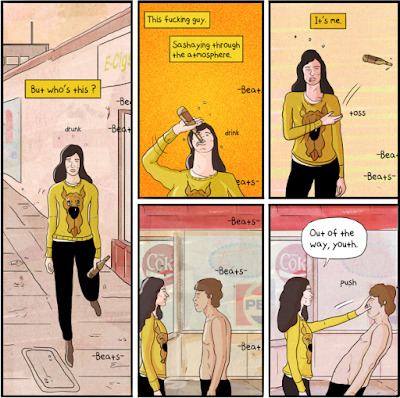 If there’s a specific message to be glommed from An Actual Goblin, it comes in the form of a Sartre quote hidden amongst all those horses and a shitload of fast food signs: “I confused things with their name. That is belief.” Toms’ figures are distinct but uniformly lumpy, like the modern reincarnation of the Bokonon mud people origin belief from Cat’s Cradle, but the brand names in the background are crisp, bold, and impossible to miss, drawing the actual reader’s eye as much as they define the environment and personalities of these doomed late capitalism serfs. No one knows what they’re doing or why, but they appreciate that the monotony of their existence is so structured, even if that structure comes from an endless array of brands and literally brain dead sitcoms. 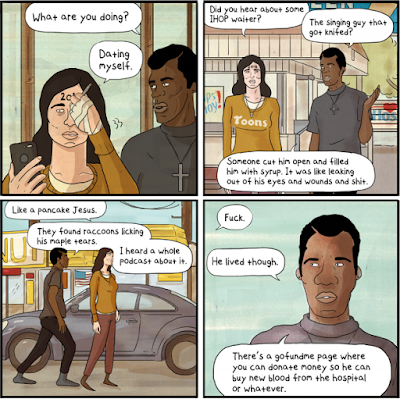 And then unspeakable violence breaks out and the illusion is shattered, maybe forever. Blood sprays, heads roll, bodies are trampled. Here, Toms portrays the chaos in the half-legible shouts and screeches of the mob as much as he does in the visuals of the violent acts, a far more effective representation of mass confusion than the tilted cameras and bumpy blurs of found footage films. While you can see the incidents that cause the mob in relative clarity, the effects of the mob are less visible, perceived more in the suggestion of the cacophony than anything else. 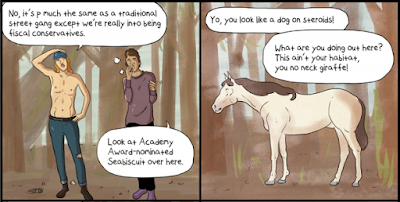 Toms’ provides an ending just as confounding and inexplicable, pessimistically suggesting the only way to really survive humanity is to opt out of it altogether. Maybe An Actual Goblin isn’t the most uplifting text for Armageddon, there are certainly many other works that will instill at least some hope or possibility for perseverance. But there is a peace that can come from seeing the absurdity of modern existence laid out so bluntly, of seeing some other fuck up trying to make sense of everything before saying "fuck it" and embracing the nonsense. Because as the saying goes, why beat ‘em when you can join ‘em? Though in the case of An Actual Goblin, I guarantee the joining that happens is not what most of you have in mind.