Writing Drunk About Crap Comics: CROCKED CRITICS on THE FIX #1 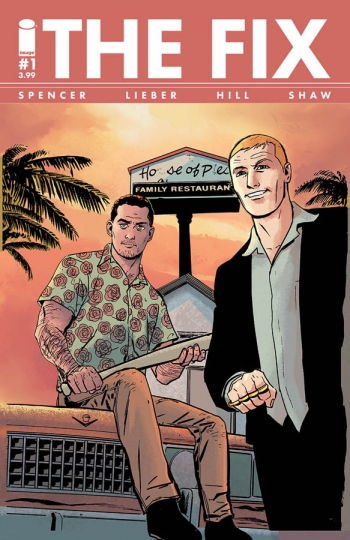 Over on Comics Bulletin, Chase Magnett and I got drunk and wrote about
THE FIX #1 from Image Comics for our column on the site called
Crocked Critics.

While Chase wanted to talk about the humor of this book, I just couldn't get past its tone-deaf premise and the slap-in-the-face nature of that.

To whit, I write:
Let me break it down. We live in a day and age of unprecedented coverage of the horrific things that people in power are constantly and consistently doing to those beneath them. How many more videos are we going to have to watch of unarmed black men being shot down by cops before something changes? How many more “trials” are we going to have to stomach in which NOTHING is done? How many more reports of things like organized prison fight clubs or racists/homophobic texts between officers or massive cover ups must we endure? This is the state of the world. We are living in it. It’s ugly and brutal and horrific and wrong.
For Leiber and Spencer to sit down in this environment and think, “Hey… wouldn’t it be funny if we cast a couple of crooked cops as heroes” is a fucking slap in the face to everyone who is a victim of police corruption and brutality.